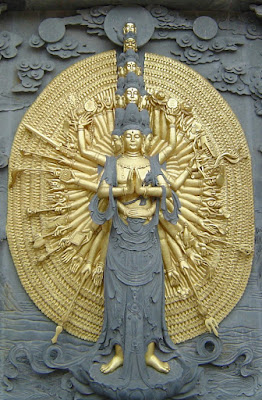 The Trikaya doctrine, (especially the doctrine of the Nirmanakaya) is an important part of Blavatsky’s The Voice of the Silence (see Fragment 2, stanzas 140-146, 177-194 and Fragment 3 stanzas 281-306). , Called the Three Vestures, it is a distinctive part of the Secret Path, the esoteric path, which is similar to the Buddhist Mahayana path, in contrast to the Open Path, the exoteric path, which is similar to the Theravada path. To conclude this series, below are a few sample extracts and notes, from that classic work:
Step out from sunlight into shade, to make more room for others. The tears that water the parched soil of pain and sorrow, bring forth the blossoms and the fruits of Karmic retribution. Out of the furnace of man's life and its black smoke, winged flames arise, flames purified, that soaring onward, 'neath the Karmic eye, weave in the end the fabric glorified of the three vestures of the Path. (2, 140)
The Shangna robe, 'tis true, can purchase light eternal. The Shangna robe alone gives the Nirvâna of destruction; it stops rebirth, but, O Lanoo, it also kills — compassion. No longer can the perfect Buddhas, who don the Dharmakâya glory, help man's salvation. Alas! shall selves be sacrificed to Self; mankind, unto the weal of Units? (2, 142)
Know, O beginner, this is the Open Path, the way to selfish bliss, shunned by the Bodhisattvas of the "Secret Heart," the Buddhas of Compassion.  (2, 143)
To live to benefit mankind is the first step. To practise the six glorious virtues is the second. (2, 144)
To don Nirmânakâya's humble robe is to forego eternal bliss for Self, to help on man's salvation. To reach Nirvâna's bliss, but to renounce it, is the supreme, the final step — the highest on Renunciation's Path. (2, 145)
The "Open Way," no sooner hast thou reached its goal, will lead thee to reject the Bodhisattvic body and make thee enter the thrice glorious state of Dharmakâya (37) which is oblivion of the World and men for ever.  (2, 186)
The "Secret Way" leads also to Paranirvânic bliss — but at the close of Kalpas without number; Nirvânas gained and lost from boundless pity and compassion for the world of deluded mortals. (2, 187)

Remember, thou that fightest for man's liberation (20), each failure is success, and each sincere attempt wins its reward in time. The holy germs that sprout and grow unseen in the disciple's soul, their stalks wax strong at each new trial, they bend like reeds but never break, nor can they e'er be lost. But when the hour has struck they blossom forth. (3, 274)
(20). This is an allusion to a well-known belief in the East (as in the West, too, for the matter of that) that every additional Buddha or Saint is a new soldier in the army of those who work for the liberation or salvation of mankind. In Northern Buddhist countries, where the doctrine of Nirmânakâyas — those Bodhisattvas who renounce well-earned Nirvâna or the Dharmakâya vesture (both of which shut them out for ever from the world of men) in order to invisibly assist mankind and lead it finally to Paranirvâna — is taught, every new Bodhisattvaor initiated great Adept is called the "liberator of mankind." 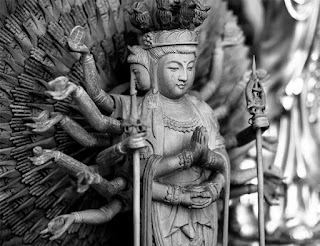 Know, O Naljor, thou of the Secret Path, its pure fresh waters must be used to sweeter make the Ocean's bitter waves — that mighty sea of sorrow formed of the tears of men. (3, 290)
Alas! when once thou hast become like the fix'd star in highest heaven, that bright celestial orb must shine from out the spatial depths for all — save for itself; give light to all, but take from none. (3, 291)
Alas! when once thou hast become like the pure snow in mountain vales, cold and unfeeling to the touch, warm and protective to the seed that sleepeth deep beneath its bosom — 'tis now that snow which must receive the biting frost, the northern blasts, thus shielding from their sharp and cruel tooth the earth that holds the promised harvest, the harvest that will feed the hungry.  (3, 292)
Self-doomed to live through future Kalpas,unthanked and unperceived by man; wedged as a stone with countless other stones which form the "Guardian Wall" (28), such is thy future if the seventh gate thou passest. Built by the hands of many Masters of Compassion, raised by their tortures, by their blood cemented, it shields mankind, since man is man, protecting it from further and far greater misery and sorrow. (3, 293)
(28). The "Guardian Wall" or the "Wall of Protection." It is taught that the accumulated efforts of long generations of Yogis, Saints and Adepts, especially of the Nirmânakâyas — have created, so to say, a wall of protection around mankind, which wall shields mankind invisibly from still worse evils. 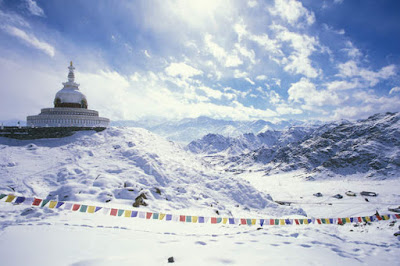 "Yea; on the Ârya Path thou art no more Srotâpatti, thou art a Bodhisattva (33). The stream is cross'd. 'Tis true thou hast a right to Dharmakâya vesture; but Sambhogakâya is greater than a Nirvânî, and greater still is a Nirmânakâya — the Buddha of Compassion (34).  (3, 306)
Now bend thy head and listen well, O Bodhisattva — Compassion speaks and saith: "Can there be bliss when all that lives must suffer? Shalt thou be saved and hear the whole world cry?" (3, 307)
(33). A Bodhisattva is, in the hierarchy, less than a "perfect Buddha." In the exoteric parlance these two are very much confused. Yet the innate and right popular perception, owing to that self-sacrifice, has placed a Bodhisattva higher in its reverence than a Buddha.
(34). This same popular reverence calls "Buddhas of Compassion" those Bodhisattvas who, having reached the rank of an Arhat (i.e., having completed the fourth or seventh Path), refuse to pass into the Nirvânic state or "don the Dharmakâya robe and cross to the other shore," as it would then become beyond their power to assist men even so little as Karma permits. They prefer to remain invisibly (in Spirit, so to speak) in the world, and contribute toward man's salvation by influencing them to follow the Good Law, i.e., lead them on the Path of Righteousness.
The three Buddhic bodies or forms are styled: —
1. Nirmânakâya.
2. Sambhogakâya.
3. Dharmakâya.
The first is that ethereal form which one would assume when leaving his physical he would appear in his astral body — having in addition all the knowledge of an Adept. The Bodhisattva develops it in himself as he proceeds on the Path. Having reached the goal and refused its fruition, he remains on Earth, as an Adept; and when he dies, instead of going into Nirvâna, he remains in that glorious body he has woven for himself, invisible to uninitiated mankind, to watch over and protect it.
Sambhogakâya is the same, but with the additional lustre of "three perfections," one of which is entire obliteration of all earthly concerns.
The Dharmakâya body is that of a complete Buddha, i.e., no body at all, but an ideal breath: Consciousness merged in the Universal Consciousness, or Soul devoid of every attribute. Once a Dharmakâya, an Adept or Buddha leaves behind every possible relation with, or thought for this earth. Thus, to be enabled to help humanity, an Adept who has won the right to Nirvâna, "renounces the Dharmakâya body" in mystic parlance; keeps, of the Sambhogakâya, only the great and complete knowledge, and remains in his Nirmânakâya body. The esoteric school teaches that Gautama Buddha with several of his Arhats is such a Nirmânakâya, higher than whom, on account of the great renunciation and sacrifice to mankind there is none known.
Part 1
Posted by Mark Casady at 08:11