From the Perfect Book of Emperor Guan's Enlightenment. Other teachings from Chinese culture provide similar guidance on conducting ourselves. Taoism talks about the Five Beauties [of the human character]: Kindness; Proper Conduct; Propriety; Wisdom, Trustworthiness. 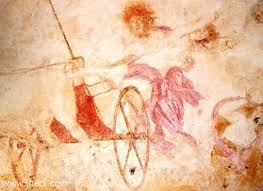 Coming off a nice kite formation and an overall very harmonious chart the week before, after a very intense month prior to that, this chart sends us back into an intense two-month period – as the Pluto-Uranus-Jupiter T-Square aspects are winding down. The summer aspects really shook things up, notably with the so-called great American eclipse on August 21st with events such as Robert E. Lee affair, the North Korean missile crisis, the Texas flood, hurricane Irma and so the chart for the Autumn equinox is less volatile but still quite tense.
Jupiter -Uranus opposition
The Jupiter-Uranus opposition can signify release from restrictions, hence ruptures or departures that bring liberating changes, as well as restlessness leading to drastic changes and as this opposition has marked much of the year, it’s final two months can be an opportunity to pursue, complete and consolidate changes in one’s life.
The kite formation is no longer complete, but there are still many positive aspects around this opposition. Mars, Mercury, and Venus close-knit in Virgo, sextile and trine to Jupiter and Uranus. Moreover, Saturn, highly charged on this chart, also has two strong Trines with Jupiter and Uranus respectively favor many qualities to help this change: Solitude, reflectiveness, expansiveness, pragmatism, clarity, sharpness, contentedness, benevolence, optimism, talkativeness, and creative intellect.
I think that these aspects denote overall favorable conditions to manage the changes and reforms called for in personal and societal levels.
Neptune – Mercury - Saturn T-Square
This aspect, however, brings a strongly challenging inhibition to the transformation process with moods such as mental confusion, pessimism, uncertainty, frustrations, dissension, lack of realism, and discouragement. Although the Neptune opposition brings confusion to the normally precise, accurate Virgo sign (Mercury is ruler of Virgo, while Venus is its fall - and the Moon in Scorpio Opposite Uranus, conjunct with Jupiter can bring more confusion) ; this can be attenuated by the Pluto trines and a sextile with Neptune, that bring impetus for new activities, risk, stimulation, alertness, deep solutions, altruism, spiritual searching, psychological insights, and strong love.

Sun -Saturn - Chiron T-Square
Interestingly, Saturn and Chiron are square to each other right close to the solstice and equinoctial points and hence compose difficult aspects with the Sun at both equinoxes and solstices this astrological year. Besides the provocative Mars aspects, this Chiron – Saturn square marks the year with strong challenges to self-esteem, stirring up deep wounds and raising issues that call for strong healing impetus.
So we are dealings with problems of strong impetus for deep structural changes resulting in power struggles, that are challenged by inhibitions and insecurities. As this Pluto – Jupiter- Uranus T-Square fades out over the next two months, it will end with a bang as Mars joins the fray to form a combustible Mars- Pluto – Uranus T-Square to shake things up in November finally fading by mid-December when the holiday season brings less intense new energies marked by Jupiter’s moves into Scorpio. It could be good to consider this very tough Mars aspect as a final shaking of the house, to test its strength, as it were. If solid foundations were built during the year, then the house should be able to withstand the storm.
Although the aspects this year are quite intense and volatile, for those concerned with self-transformation, it is good to keep in mind that it is these types of aspects that allow one  to look at oneself in a deeper way, and to undertake meaningful problem-solving initiatives, and so, if one works at it, they often provide very useful situations for effective self-transformation and individual growth - it is in difficult situations that one's true mettle comes through. In that sense, this chart fits well with the "journey to the underworld" symbolism linked to the Fall season, a period of introspection and facing the darkness within before discovering the inner light.
References: 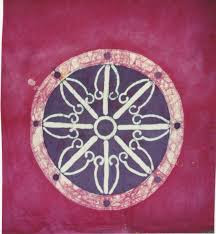 William Q Judge remains one of the most prolific and insightful western writers on karma and reincarnation in modern times. The following are extracts from an early, classic article:
It is therefore necessary in order to understand the nature of Karma and its relation to the individual to consider action in all its aspects. Every act proceeds from the mind. Beyond the mind there is no action and therefore no Karma. The basis of every act is desire. The plane of desire or egotism is itself action and the matrix of every act. This plane may be considered as non-manifest, yet having a dual manifestation in what we call cause and effect, that is, the act and its consequences.
In reality, both the act and its consequences are the effect, the cause being on the plane of desire. Desire is therefore the basis of action in its first manifestation on the physical plane, and desire determines the continuation of the act in its karmic relation to the individual. For a man to be free from the effects of the Karma of any act he must have passed to a state no longer yielding a basis in which that act can inhere.
The ripples in the water caused by the action of the stone will extend to the furthest limit of its expanse, but no further; they are bounded by the shore. Their course is ended when there is no longer a basis or suitable medium in which they can inhere; they expend their force and are not. Karma is, therefore, as dependent upon the present personality for its fulfillment, as it was upon the former for the first initial act.
The first great result of Karmic action is the incarnation in physical life. The birth-seeking entity consisting of desires and tendencies, presses forward towards incarnation. It is governed in the selection of its scene of manifestation by the law of economy. Whatever is the ruling tendency, that is to say, whatever group of affinities is strongest, those affinities will lead it to the point of manifestation at which there is the least opposition.
It incarnates in those surroundings most in harmony with its Karmic tendencies and all the effects of actions contained in the Karma so manifesting will be experienced by the individual. This governs the station of life, the sex, the conditions of the irresponsible years of childhood, the constitution with the various diseases inherent in it, and in fact all those determining forces of physical existence which are ordinarily classed under the terms, "heredity," and "national characteristics."
It must, however, be remembered that there are many tendencies which are not exhausted in the act of incarnation. It may happen that the Karma which caused an entity to incarnate in any particular surrounding, was only strong enough to carry it into physical existence. Being exhausted in that direction, freedom is obtained for the manifestation of other tendencies and their Karmic effects.
For instance, Karmic force may cause an entity to incarnate in a humble sphere of life. He may be born as the child of poor parents. The Karma follows the entity, endures for a longer or shorter time, and becomes exhausted. From that point, the child takes a line of life totally different from his surroundings. Other affinities engendered by former action express themselves in their Karmic results. The lingering effect of the past Karma may still manifest itself in the way of obstacles and obstructions which are surmounted with varying degrees of success according to their intensity.
These three, physical, intellectual, and emotional, deal entirely with objects of sense perception and may be called the great battlefield of Karma.1 There is also the plane of ethics, the plane of discrimination of the "I ought to do this, I ought not to do that." This plane harmonizes the intellect and the emotions. All these are the planes of Karma or action: what to do, and what not to do. It is the mind as the basis of desire that initiates action on the various planes, and it is only through the mind that the effects of rest and action can be received.

If on the other hand the interest is detached from the plane of sense gratification, if there is a constant effort to fix the mind on the attainment of the highest ideal, the result will be that the past Karma will find no basis in which to inhere on the physical plane. Karma will therefore be manifested only in harmony with the plane of desire. The sense energy of the physical plane will exhaust itself on a higher plane and thus become transmuted in its effects.

It will appear, therefore, that although absolutely true that action brings its own result, "there is no destruction here of actions good or not good. Coming to one body after another they become ripened in their respective ways." Yet this ripening is the act of the individual. Free will of man asserts itself and he becomes his own saviour. To the worldly man Karma is a stern Nemesis, to the spiritual man Karma unfolds itself in harmony with his highest aspirations. He will look with tranquility alike on past and future, neither dwelling with remorse on past sin nor living in expectation of reward for present action.