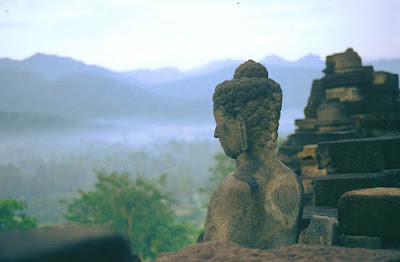 Below is an abridged rendetion of Blavatsky's Voice of the Silence  dealing with the six Paramitas:

Armed with the key of Charity, of love and tender mercy, thou art secure before the gate of Dâna, the gate that standeth at the entrance of the path.
Behold, O happy Pilgrim! The portal that faceth thee is high and wide, seems easy of access. The road that leads therethrough is straight and smooth and green. 'Tis like a sunny glade in the dark forest depths, a spot on earth mirrored from Amitâbha's paradise. There, nightingales of hope and birds of radiant plumage sing perched in green bowers, chanting success to fearless Pilgrims. They sing of Bodhisattvas' virtues five, the fivefold source of Bodhi power, and of the seven steps in Knowledge.
Pass on! For thou hast brought the key; thou art secure.

And to the second gate the way is verdant too. But it is steep and winds up hill; yea, to its rocky top. Grey mists will over-hang its rough and stony height, and all be dark beyond. As on he goes, the song of hope soundeth more feeble in the pilgrim's heart. The thrill of doubt is now upon him; his step less steady grows.
Beware of this, O candidate! Beware of fear that spreadeth, like the black and soundless wings of midnight bat, between the moonlight of thy Soul and thy great goal that loometh in the distance far away.
Fear, O disciple, kills the will and stays all action. If lacking in the Śîla virtue, — the pilgrim trips, and Karmic pebbles bruise his feet along the rocky path.

Be of sure foot, O candidate. In Kshânti's* essence bathe thy Soul; for now thou dost approach the portal of that name, the gate of fortitude and patience.
[*Kshânti, "patience," vide supra the enumeration of the golden keys.]
Close not thine eyes, nor lose thy sight of Dorje; Mâra's arrows ever smite the man who has not reached Virâga*.
[*Ibid.]
Beware of trembling. 'Neath the breath of fear the key of Kshânti rusty grows: the rusty key refuseth to unlock.
But once that thou hast passed the gate of Kshânti, step the third is taken. Thy body is thy slave. Now, for the fourth prepare, the Portal of temptations which do ensnare the inner man.

Ere thou canst near that goal, before thine hand is lifted to upraise the fourth gate's latch, thou must have mustered all the mental changes in thy Self and slain the army of the thought sensations that, subtle and insidious, creep unasked within the Soul's bright shrine.
If thou would'st not be slain by them, then must thou harmless make thy own creations, the children of thy thoughts, unseen, impalpable, that swarm round humankind, the progeny and heirs to man and his terrestrial spoils. Thou hast to study the voidness of the seeming full, the fulness of the seeming void. O fearless Aspirant, look deep within the well of thine own heart, and answer. Knowest thou of Self the powers, O thou perceiver of external shadows?
If thou dost not — then art thou lost.
For, on Path fourth, the lightest breeze of passion or desire will stir the steady light upon the pure white walls of Soul. The smallest wave of longing or regret for Mâyâ's gifts illusive, along Antahkarana— the path that lies between thy Spirit and thy self, the highway of sensations, the rude arousers of Ahankâra — a thought as fleeting as the lightning flash will make thee thy three prizes forfeit — the prizes thou hast won.
For know, that the ETERNAL knows no change.
"The eight dire miseries forsake for evermore. If not, to wisdom, sure, thou can'st not come, nor yet to liberation," saith the great Lord, the Tathâgata of perfection, "he who has followed in the footsteps of his predecessors."
Stern and exacting is the virtue of Virâga. If thou its path would'st master, thou must keep thy mind and thy perceptions far freer than before from killing action.
Thou hast to saturate thyself with pure Alaya, become as one with Nature's Soul-Thought. At one with it thou art invincible; in separation, thou becomest the playground of Samvriti, origin of all the world's delusions.
Prepare, and be forewarned in time. If thou hast tried and failed, O dauntless fighter, yet lose not courage: fight on and to the charge return again, and yet again.
The fearless warrior, his precious life-blood oozing from his wide and gaping wounds, will still attack the foe, drive him from out his stronghold, vanquish him, ere he himself expires. Act then, all ye who fail and suffer, act like him; and from the stronghold of your Soul, chase all your foes away — ambition, anger, hatred, e'en to the shadow of desire — when even you have failed. . .
Remember, thou that fightest for man's liberation, each failure is success, and each sincere attempt wins its reward in time. The holy germs that sprout and grow unseen in the disciple's soul, their stalks wax strong at each new trial, they bend like reeds but never break, nor can they e'er be lost. But when the hour has struck they blossom forth. . .
But if thou cam'st prepared, then have no fear.

Henceforth thy way is clear right through the Vîrya gate, the fifth one of the Seven Portals. Thou art now on the way that leadeth to the Dhyâna haven, the sixth, the Bodhi Portal.

The Dhyâna gate is like an alabaster vase, white and transparent; within there burns a steady golden fire, the flame of Prajñâ that radiates from Âtman.
Thou art that vase.

picture thanks to http://lisiming.com/
Posted by Mark Casady at 11:02 No comments: 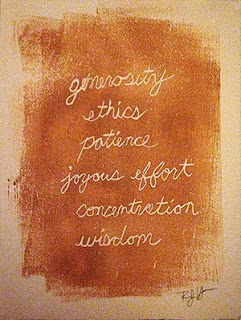 Below are passages from the great Kagyu Tibetan Buddhist scholar Gampopa (1079–1153), from the classic Jewel Ornament of Liberation:

A. moral ethics of restraint,
B. morality of accumulating virtuous Dharma, and
C. morality of benefitting sentient beings.


The first means to restrain your mind in a proper place; the second one means to mature the Dharma qualities of your mind; and the third one means to fully mature sentient beings.(Chapter 13.3)


The first is the excellent motivation, the second one is excellent applied effort, and the third one is the perfection of these two. (Chapter 15.3)

The two types of supramundane wisdom awareness are called inner awarenesses which arise in dependence on the holy Dharma.

B. Wisdom Awareness of the Lesser Supramundane.
The first, the lesser supramundane wisdom awareness, is the wisdom awareness that arises from the hearing, reflection, and meditation of the Hearers and Solitary Realisers. It is the realization that the afflicted aggregates of personality are impure, of the nature of suffering, impermanent, and without self.

Also, the Lamp for the Path to Enlightenment says:
That which is called wisdom awareness has been thoroughly explained as coming from the realization of the emptiness of inherent existence, which is the realization that aggregates, constituent elements, and sources are without birth

Blavatsky and the Six Perfections (Paramitas) - Part I 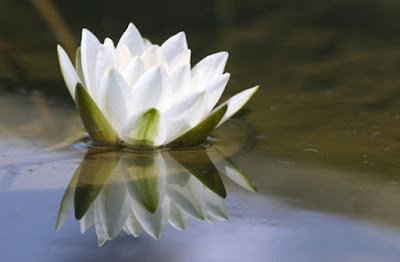 1. DANA, the key of charity and love immortal.


2. SHILA, the key of Harmony in word and act, the key that counterbalances the cause and the effect, and leaves no further room for Karmic action.

4. VIRYA, the dauntless energy that fights its way to the supernal TRUTH, out of the mire of lies terrestrial.


5. DHYANA, whose golden gate once opened leads the Narjol* toward the realm of Sat eternal and its ceaseless contemplation.  [*A saint, an adept.]


6. PRAJNA, the key to which makes of a man a god, creating him a Bodhisattva, son of the Dhyanis.


Plus: VIRAGA, indifference to pleasure and to pain, illusion conquered, truth alone perceived.


"Try to realize that progress is made step by step, and each step gained by heroic effort. Withdrawal means despair or timidity. . . . Conquered passions, like slain tigers, can no longer turn and rend you. Be hopeful then, not despairing. With each morning's awakening try to live through the day in harmony with the Higher Self. 'Try' is the battle-cry taught by the teacher to each pupil. Naught else is expected of you. One who does his best does all that can be asked. There is a moment when even a Buddha ceases to be a sinning mortal and takes his first step toward Buddhahood. The six and ten Paramitas (virtues) are not for priests and yogis alone, as said, but stand for models for us all to strive after--and neither priest nor yogi, Chela nor Mahatma, ever attained all at once. . . . The idea that sinners and not saints are expected to enter the Path is emphatically stated in the Voice of the Silence."
http://www.blavatsky.net/index.php/17-hpblavatsky/hpb-articles/122-she-being-dead-yet-speaketh

Here's a good basic introduction to the Paramitas, courtesy of His Holiness the XIVth Dalai Lama and Robert Thurman:


''Although the generation of the aspirational aspects of the bodhichitta alone is very remarkable and a virtuous action in itself, that alone will not fulfill your aim of achieving Buddhahood. It is important to engage in the practice of the bodhisattva deeds. These deeds, called the six perfections, constitute the essential and comprehensive path to enlightenment, combining methods and wisdom. The Buddha himself said that by the force of their wisdom bodhisattvas abandon all the delusions, but by the force of their compassionate method they never abandon sentient beings. These two aspects of the path should always be undertaken in combination, never in isolation. The entire practice of the bodhisattva is classified under the six perfections, which are generosity, ethics, patience, effort, concentration, and wisdom.

To fulfill the wishes of others it is very important to engage in the practice of generosity, and generosity itself should be reinforced by the pure observance of ethics, abstaining from inflicting harm upon others. The actual practice itself should be completed by the practice of patience, because you should have forbearance toward harm inflicted upon you by others. In order to engage in such practices, you must have strong effort. Without concentration, your practice will not be powerful. And without wisdom realizing the nature of phenomena, you will not be able to guide others rightly on the path leading to the achievement of enlightenment.''

(The Way to Freedom Harper Sanfrancisco, 1994) 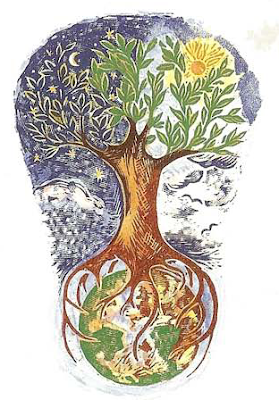 Blavatsky's Ten Fundamental Propositions of Oriental Philosophy from Isis Unveiled caught on quite well, and remain a pretty good universal summary of principles of a traditional world view:
To comprehend the principles of natural law involved in the various phenomena already described, the reader must keep in mind the fundamental propositions of Oriental philosophy which we have elucidated, as yet. Let us recapitulate very briefly:
To sum up: MAGIC is spiritual Wisdom; nature is the material ally, pupil and servant of the magician. One common vital principle pervades all things, and this is controllable by the perfected human will...
(Isis Unveiled, Vol. ΙΙ, 587-590)
image thanks to www.wolindia.com
Posted by Mark Casady at 12:29 No comments: