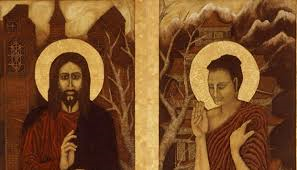 The following passages taken from John of Ruysbroeck, The Adornment of the Spiritual Marriage (C.A. Wynschenk Dom, transl.) aka John of Ruusbroec, Spiritual Espousals

Compassion
OUT of kindliness springs compassion, which is a fellow-feeling with all men; for none can share the griefs of all, save him who is kind. Compassion is an inward movement of the heart, stirred by pity for the bodily and ghostly griefs of all men. Such a man will also regard with pity the bodily needs of his neighbours, and the manifold sufferings of human nature; seeing men hungry, thirsty, cold, naked, sick, poor, and abject; the manifold oppressions of the poor, the grief caused by loss of kinsmen, friends, goods, honour, peace; all the countless sorrows which befall the nature of man. These things move the just to compassion, so that they share the sorrows of all. This work of compassion and of common neighbourly love overcomes and casts out the third mortal sin, that is hatred or Envy. For compassion is a wound in the heart, whence flows a common love to all mankind and which cannot be healedso long as any suffering lives in man; for God has ordained grief and sorrow of heart before all the virtues. (Bk. I, Ch. 28)

Generosity (Dana)
FROM this compassion springs generosity; for none can be generous in a supernatural way, with faithfulness and goodwill towards all, save him who has a pitiful heart—though a man may often show generosity to a particular person without charity and without supernatural generosity. Because of this generosity men are wont to practise the seven works of mercy; the rich do them by their alms and because of their riches, the poor by their goodwill and by their hearty desire to do as the rich if they could. And thus the virtue of generosity is made perfect. (Bk. I, Ch. 19) 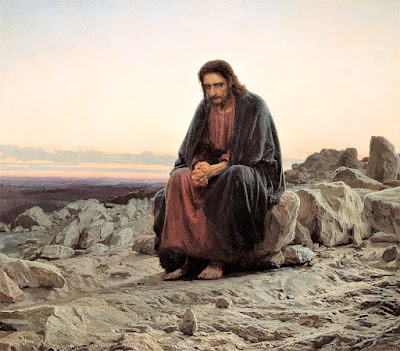 Ethical Discipline (Sila)
WHOSOEVER wishes to obtain and to keep these virtues should adorn and possess and rule his soul like a kingdom. Free-will is the king of the soul. It is free by nature and still more free by grace. It shall be crowned with a crown that is called charity. This king, free-will, should dwell in the chief city of the kingdom; namely, in the desirous power of the soul. And he should be clad and adorned with a garment of two parts. The right side of his garment should be a virtue called strength, that therewith he may be strong and mighty to overcome all hindrances, and to ascend up to heaven, into the palace of the most high Emperor, and to bow down his crowned head before the most high King, with love, and with self-surrendered desire. The left side of the garment should be a cardinal virtue called moral force.

This king should also choose councillors in his kingdom: the wisest in the country. These should be two divine virtues: knowledge and discretion, enlightened by the light of Divine grace. They should dwell near the king, in a palace called the rational power of the soul, and they should be clad and adorned with a moral virtue called temperance, so that the king may always do or leave undone according to their counsels. This king, free-will, should also appoint in his kingdom a judge: that is, righteousness. This is a divine virtue when it springs from love, and it is one of the highest of moral virtues. This judge should dwell in the heart, in the midst of the kingdom, in the irascible power. And he should be adorned with a moral virtue called prudence; for righteousness cannot be perfect without prudence.  (Bk. I, CH. 24)

Patience (Kshanti)
Patience is a peaceful endurance of all things that may befall a man either from God or from the creatures. Nothing can trouble the patient man; neither the loss of earthly goods, of friends and kinsmen, nor sickness, nor disgrace, nor life, nor death, nor purgatory, nor devil, nor hell. For he has abandoned himself in perfect charity to the will of God, and as he is not burdened by mortal sin, everything that God imposes on him, in time and in eternity, is light to him. By this patience a man is also adorned and armed against peevishness and sudden wrath, and impatience in suffering; which often stir a man from within and from without, and lay him open to many temptations. (Bk. I, Ch. 25)

Zeal and Diligence (Virya)
It is an inward restless striving after every virtue, after the likeness of Christ and of all His saints. In this zeal a man longs to devote his heart and his senses, his soul and his body, and all that he is, and all that he has and all toward which he aspires, to the glory and praise of God. This zeal makes a man grow in reason and prudence, and practise the virtues, both of soul and of body, in righteousness. Through this supernatural zeal all the powers of the soul are laid open to God, and are made ready for all virtues. And the conscience rejoices, and the grace of God is increased; the virtues are practised with joy and gladness, and the outward works are adorned. Whosoever has received this living zeal from God has cast out the fifth mortal sin, which is indolence of the mind or Sloth, as regards the virtues which it is needful that we should practise. And sometimes, this living zeal also casts out the sloth and indolence of the natural body. (Bk. I, Ch. 20) 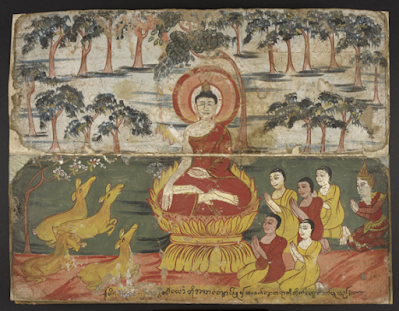 Meditative Stabilization (Dhyana)
And therefore God gives him the sixth gift, which is the spirit of Understanding. This gift we have already likened to a fountain with three rills, for it establishes our spirit in the unity, it reveals Truth and it brings forth a wide and general love. This gift may also be likened to sunshine, for by its shining the sun fills the air with a simple brightness and lights all forms, and shows the distinctins of all colours. And thereby it shows forth its own power; and its heat is common to the whole world, bringing forth fruits and useful things. So likewise does the first ray of this gift bring about simplicity within the spirit. And this simplicity is penetrated by a particular radiance even as the air of the heavens by the splendour of the sun. For the grace of God, which is the ground of all gifts, maintains itself essentially like to a simple light in our potential understanding: and, by means of this simple light our spirit is made stable and onefold and enlightened, and fulfilled of grace and Divine gifts: and here it is like unto God through grace and Divine love. (Bk. II, Ch. 63)

Wisdom (Prajna)
Now understand this well: when we turn within ourselves in contemplation, the fruitive unity of God is like to a darkness, a somewhat which is unconditioned and incomprehensible. And the spirit turns inward through love and through simplicity of intention, because it is active in all virtues, offering itself up in fruition above all virtues. In this loving introversion, there arises the seventh gift, which is the spirit of Savouring Wisdom; and it saturates the simplicity of our spirit, soul and body, with wisdom and with ghostly savours. And it is a ghostly touch or stirring within the unity of our spirit; and it is an inpouring and a source of all grace, all gifts and all virtues. And, in this touch of God, each man savours his exercise and his life according to the power of the touch and the measure of his love. (Bk. II, Ch. 63)

Meditation on Emptiness
At times, the inward man performs his introspection simply, according to the fruitive tendency, above all activity and above all virtues, through a simple inward gazing in the fruition of love. And here he meets God without intermediary. And from out the Divine Unity, there shines into him a simple light and this light shows him Darkness and Nakedness and Nothingness. In the Darkness, he is enwrapped and falls into somewhat which is in no wise, even as one who has lost his way. In the Nakedness, he loses the perception and discernment of all things, and is transfigured and penetrated by a simple light. In the Nothingness, all his activity fails him, for he is vanquished by the working of God's abysmal love, and in the fruitive inclination of his spirit he vanquishes God, and becomes one spirit with him. And in this oneness with the Spirit of God, he enters into a fruitive tasting and possesses the Being of God. And he is filled, according to the measure in which he has sunk himself in his essential being with the abysmal delights and riches of God. (Bk. II, Ch. 65)

The Bodhisattva Path
NOW the man shall go out towards himself and towards all men of good-will, and shall taste and behold how that they are tied and bound together in love; and he shall beseech and pray God that He may let His customary gifts flow forth, that thereby all may be confirmed in His love and His eternal worship. This enlightened man shall faithfully and discreetly teach and instruct, reprove and serve, all men; for he bears in him a love towards all. (Bk. II, Ch. 43)
Posted by Mark Casady at 10:40