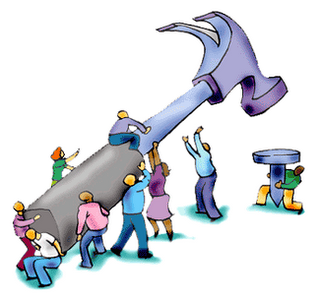 But no Theosophist has the right to this name, unless he is thoroughly imbued with the correctness of Carlyle's truism: "The end of man is an action and not a thought, though it were the noblest" — and unless he sets and models his daily life upon this truth. The profession of a truth is not yet the enactment of it; and the more beautiful and grand it sounds, the more loudly virtue or duty is talked about instead of being acted upon, the more forcibly it will always remind one of the Dead Sea fruit.(Key 230)

2- Modest concrete actions are better than sophisticated theories with no application.
However insignificant, and however limited the line of good deeds, the latter will have always more weight than empty and vainglorious talk, and will be theosophy whereas theories without any practical realisation are at best philosophy. [...]Therefore, when we are told that "the question for consideration is not whether the Theosophical Society is doing good, but whether it is doing that kind of good which is entitled to the name of Theosophy" -- we turn round and ask: And who is to be the judge in this mooted question? We have heard of one of the greatest Theosophists who ever lived, who assured his audience that whosoever gave a cup of cold water to a little one in his (Theosophy's) name, would have a greater reward than all the learned Scribes and Pharisees.

[The Original Programme of the Theosophical Society, Ostende, October 3, 1886]

3- Unwise activity is better than none at all.
Better unwise activity, than an overdose of too wise inactivity, apathy or indifference which are always the death of an undertaking.

[The Original Programme of the Theosophical Society, Ostende, October 3, 1886]

4- Working together in a spirit of unity and cooperation is essential.
Let the encouragement we draw from a survey of the results accomplished in the year that has fled serve to spur us on to greater efforts and more strenuous exertions. Let it make all feel that there is a power behind the Society which will give us the strength we need, which will enable us to move the world, if we will but UNITE and WORK as one mind, one heart. The Masters require only that each shall do his best, and, above all, that each shall strive in reality to feel himself one with his fellow-workers.
It is not a dull agreement on intellectual questions, or an impossible unanimity as to all details of work, that is needed; but a true, hearty, earnest devotion to our cause which will lead each to help his brother to the utmost of his power to work for that cause, whether or not we agree as to the exact method of carrying on that work. The only man who is absolutely wrong in his method is the one who does nothing; each can and should cooperate with all and all with each in a large-hearted spirit of comradeship to forward the work of bringing Theosophy home to every man and woman in the country. (Letter II — 1889 - Third Annual Convention — April 28-29)

5- Theosophical work is based on fraternal, sympathetic collective cooperation.
Theosophy teaches mutual-culture before self-culture to begin with. Union is strength. It is by gathering many theosophists of the same way of thinking into one or more groups, and making them closely united by the same magnetic bond of fraternal unity and sympathy that the objects of mutual development and progress in Theosophical thought may be best achieved.
[The Original Programme of the Theosophical Society, Ostende, October 3, 1886]

6-Participating unselfishly in work for the good of others is advocated.
Though free to pursue whatever intellectual occupation pleases him the best, each member of our Society must, however, furnish some reason for belonging thereto, which amounts to saying that each member must contribute his part, small though it be, in mental or other labour for the benefit of all. If he does not work for others, he has no reason for being a Theosophist. THE NEW CYCLE [La Revue Theosophique, Paris, Vol.  I, No.  I, March 21, 1889, pp. 3-13]

7- Besides study and research, one is encouraged to participate in practical theosophical work.
Every lay member is entitled to general instruction if he only wants it; but few are willing to become what is called "working members," and most prefer to remain the drones of Theosophy. Let it be understood that private research is encouraged in the T. S., provided it does not infringe the limit which separates the exoteric from the esoteric, the blind from the conscious magic. (Key 24)

8- For doing good works, knowledge is required; a double activity of doing and learning is necessary.
None know more keenly and definitely than they that good works are necessary; only these cannot be rightly accomplished without knowledge. Schemes for Universal Brotherhood, and the redemption of mankind, might be given out plentifully by the great adepts of life, and would be mere dead-letter utterances while individuals remain ignorant, and unable to grasp the great meaning of their teachers. To Theosophists we say, let us carry out the rules given us for our society before we ask for any further schemes or laws. To the public and our critics we say, try to understand the value of good works before you demand them of others, or enter upon them rashly yourselves. Yet it is an absolute fact that without good works the spirit of brotherhood would die in the world; and this can never be. Therefore is the double activity of learning and doing most necessary; we have to do good, and we have to do it rightly, with knowledge.
("LET EVERY MAN PROVE HIS OWN WORK" Lucifer, Vol. I, Np. 3, November, 1887, pp. 161-169)

9- Wisdom is important in determining how to help others.
But, in recognising this, he also makes another discovery. He sees that it takes a very wise man to do good works without danger of doing incalculable harm. A highly developed adept in life may grasp the nettle, and by his great intuitive powers, know whom to relieve from pain and whom to leave in the mire that is their best teacher. The poor and wretched themselves will tell anyone who is able to win their confidence what disastrous mistakes are made by those who come from a different class and endeavour to help them.
("LET EVERY MAN PROVE HIS OWN WORK" Lucifer, Vol. I, Np. 3, November, 1887, pp. 161-169)

10- Studying, learning, and spreading Theosophy is fundamental; setting an example is the most important.
ENQUIRER. How do you expect the Fellows of your Society to help in the work?
THEOSOPHIST. First by studying and comprehending the theosophical doctrines, so that they may teach others, especially the young people. Secondly, by taking every opportunity of talking to others and explaining to them what Theosophy is, and what it is not; by removing misconceptions and spreading an interest in the subject. Thirdly, by assisting in circulating our literature, by buying books when they have the means, by lending and giving them and by inducing their friends to do so. Fourthly, by defending the Society from the unjust aspersions cast upon it, by every legitimate device in their power. Fifth, and most important of all, by the example of their own lives. (Key 248-49-12)

11- Theosophical work is aimed encouraging free, enlightened thinking and overcoming dogmas and superstitions.
All of us must work for the liberation of human thought, for the elimination of selfish and sectarian superstitions, and for the discovery of all the truths that are within the reach of the human mind. This goal cannot be attained with greater certainty than through the culture of solidarity on the plane of mental work. No honest worker, no serious seeker, has ever returned therefrom empty-handed; and there are hardly any men or women, however busy they may be thought to be, unable to lay their moral or pecuniary mite on the altar of Truth. (THE NEW CYCLE [La Revue Theosophique, Paris, Vol.  I, No.  I, March 21, 1889, pp. 3-13])
12- Theosophical work strives to reduce social strife and discord.
After all, every wish and thought I can utter are summed up in this one sentence, the never dormant wish of my heart, "Be Theosophists, Work for Theosophy!" Theosophy first, and Theosophy last; for its practical realization alone can save the Western World from that selfish and unbrotherly feeling that now divides race from race, one nation from the other, and from that hatred of class and [from] social strifes, that are the curse and disgrace of so-called Christian peoples.(Letter IV — 1891 -  Fifth Annual Convention — April 26-27)
Posted by Mark Casady at 15:26