Through the Gates of Gold, Chap. 5 The Secret of Strength, p.2b 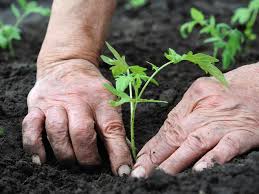 The second half of part two is an eloquent musing on the idea of what today we call self-care as tending a garden:

Paradoxically this self-care is based in selflessness,"“Give up thy life, if thou would’st live.(Give up the life of physical  personality if you would live in spirit.)” Voice of the Silence, I:
Some might say, to his own destruction. And why? Because from the hour when he first tastes the splendid reality of living he forgets more and more his individual self. No longer does he fight for it, or pit its strength against the strength of others. No longer does he care to defend or to feed it. Yet when he is thus indifferent to its welfare, the individual self grows more stalwart and robust, like the prairie grasses and the trees of untrodden forests. It is a matter of indifference to him whether this is so or not. Only, if it is so, he has a fine instrument ready to his hand; and in due proportion to the completeness of his indifference to it is the strength and beauty of his personal self. 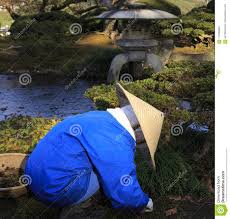 “Vigilance is the path to Immortality (Nibba’na); negligence is the path to death;
vigilant people do not die, those who are negligent are like unto the dead.” (Dhammapada 2.1):
This is readily seen; a garden flower becomes a mere degenerate copy of itself if it is simply neglected; a plant must be cultivated to the highest pitch, and benefit by the whole of the gardener's skill, or else it must be a pure savage, wild, and fed only by the earth and sky. Who cares for any intermediate state? What value or strength is there in the neglected garden rose which has the canker in every bud? For diseased or dwarfed blossoms are sure to result from an arbitrary change of condition, resulting from the neglect of the man who has hitherto been the providence of the plant in its unnatural life. But there are wind-blown plains where the daisies grow tall, with moon faces such as no cultivation can produce in them.
Cultivate, then, to the very utmost; forget no inch of your garden ground, no smallest plant that grows in it; make no foolish pretence nor fond mistake in the fancy that you are ready to forget it, and so subject it to the frightful consequences of half-measures. The plant that is watered today and forgotten tomorrow must dwindle or decay. The plant that looks for no help but from Nature itself measures its strength at once, and either dies and is re-created or grows into a great tree whose boughs fill the sky. But make no mistake like the religionists and some philosophers; leave no part of yourself neglected while you know it to be yourself. 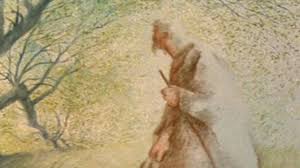 However, this vigilant self-care needs to be done with the detachment that the mindfullness of death gives:
While the ground is the gardener's it is his business to tend it; but some day a call may come to him from another country or from death itself, and in a moment he is no longer the gardener, his business is at an end, he has no more duty of that kind at all. Then his favorite plants suffer and die, and the delicate ones become one with the earth. But soon fierce Nature claims the place for her own, and covers it with thick grass or giant weeds, or nurses some sapling in it till its branches shade the ground. Be warned, and tend your garden to the utmost, till you can pass away utterly and let it return to Nature and become the wind-blown plain where the wild-flowers grow. Then, if you pass that way and look at it, whatever has happened will neither grieve nor elate you. For you will be able to say, "I am the rocky ground, I am the great tree, I am the strong daisies," indifferent which it is that flourishes where once your rose-trees grew. 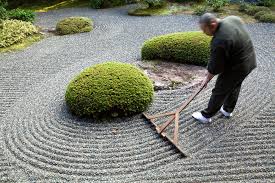 This constant attention to the lower self can only be relaxed when one has reached the Gates of Gold:
But you must have learned to study the stars to some purpose before you dare to neglect your roses, and omit to fill the air with their cultivated fragrance. You must know your way through the trackless air, and from thence to the pure ether; you must be ready to lift the bar of the Golden Gate. Cultivate, I say, and neglect nothing. Only remember, all the while you tend and water, that you are impudently usurping the tasks of Nature herself. Having usurped her work, you must carry it through until you have reached a point when she has no power to punish you, when you are not afraid of her, but can with a bold front return her her own. 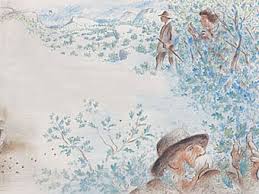 She laughs in her sleeve, the mighty mother, watching you with covert, laughing eye, ready relentlessly to cast the whole of your work into the dust if you do but give her the chance, if you turn idler and grow careless. The idler is father of the madman in the sense that the child is the father of the man. Nature has put her vast hand on him and crushed the whole edifice. The gardener and his rose-trees are alike broken and stricken by the great storm which her movement has created; they lie helpless till the sand is swept over them and they are buried in a weary wilderness. From this desert spot Nature herself will re-create, and will use the ashes of the man who dared to face her as indifferently as the withered leaves of his plants. His body, soul, and spirit are all alike claimed by her.