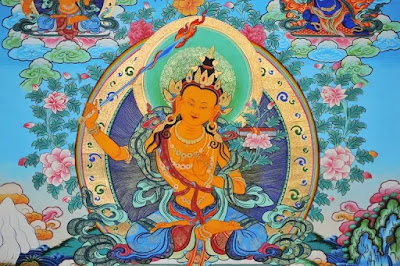 Blavatsky devotes a significant amount of space to an esoteric explanation of the mystical Buddhsit doctrine of the Trikaya, mainly in The Voice of the Silence,  the Mystery of the Buddha section from The Secret Doctrine Vol. 3, and The Theosophical Glossary. She presents it from a perrenialist perspective, explaining that the doctrine of the Trinity is an esoteric one, and can be found in many spiritual traditions (see Isis Unveiled 2, ch. 5) and the Trikaya is related to this doctrine. Moreover, following Ernest J. Eitel (Handbook of Chinese Buddhism p. 180), she posits a holistic concept of the Trikaya, showing how it is inter-related with other Buddhist ternary concepts. Blavatsky aims to give a distinctive explanation of the Nirmanakaya concept, trying to clarify the different explanations that exist in the various Buddhist schools. Below is a chart adapted from a chart by Eitel (p. 180) and some passages mainly from The Theosophical Glossary :
The three bodies are (1) the Nirmânakâya (Tul-pa’i-Ku in Tibetan), in which the Bodhisattva after entering by the six Pâramitâs [generosity, virtue, patience, vigor, meditation & wisdom] the Path to Nirvâna, appears to men in order to teach them; (2) Sambhogakâya (Dzog-pa’i-Ku), the body of bliss impervious to all physical sensations, received by one who has fulfilled the three conditions of moral perfection; and (3) Dharmakâya (in Tibetan, Cho-Ku), the Nirvânic body (Blavatsky, H. P. The Mystery of Buddha. The Secret Doctrine, Volume 3, London, Theosophical Publishing House, 1897, p. 379; (Collected Writings, Vol. 14, pp. 388-399) 392).

Trikâya (Sk) Lit., three bodies, or forms. This is a most abstruse teaching which, however, once understood, explains the mystery of every triad or trinity, and is a true key to every three-fold metaphysical symbol. In its most simple and comprehensive form it is found in the human Entity in its triple division into spirit, soul, and body, and in the universe, regarded pantheistically, as a unity composed of a Deific, purely spiritual Principle, Supernal Beings—its direct rays — and Humanity. The origin of this is found in the teachings of the pre historic Wisdom Religion, or Esoteric Philosophy. The grand Pantheistic ideal, of the unknown and unknowable Essence being transformed first into subjective, and then into objective matter, is at the root of all these triads and triplets. Thus we find in philosophical Northern Buddhism (1) Âdi-Buddha (or Primordial Universal Wisdom) ; ( 2) the Dhyâni-Buddhas (or Bodhisattvas); (3) the Mânushi (Human) Buddhas. In European conceptions we find the same: God, Angels and Humanity symbolized theologically by the God-Man. The Brahmanical Trimûrti and also the three-fold body of Shiva, in Shaivism, have both been conceived on the same basis, if not altogether running on the lines of Esoteric teachings. Hence, no wonder if one finds this conception of the triple body—or the vestures of Nirmânakâya, Sambhogakâya and Dharmakâya, the grandest of the doctrines of Esoteric Philosophy— accepted in a more or less disfigured form by every religious sect, and explained quite incorrectly by the Orientalists. 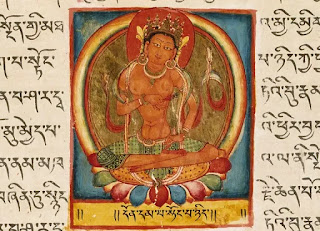 Thus, in its general application, the three-fold body symbolizes Buddha’s statue, his teachings and his stûpas ; in the priestly conceptions it applies to the Buddhist profession of faith called the Triratna, which is the formula of taking “refuge in Buddha, Dharma, and Sangha”. Popular fancy makes Buddha ubiquitous, placing him thereby on a par with an anthropomorphic god, and lowering him to the level of a tribal deity; and, as a result, it falls into flat contradictions, as in Tibet and China. Thus the exoteric doctrine seems to teach that while in his Nirmâ kâya body (which passed through 100,000 kotis of transformations on earth), he, Buddha, is at the same time a Lochana (a heavenly Dhyâni-Bodhisattva), in his Sambhogakâya “robe of absolute completeness”, and in Dhyâna, or a state which must cut him off from the world and all its connections; and finally and lastly he is, besides being a Nirmânakâya and a Sambhogakâya, also a Dharmakâya “of absolute purity”, a Vairotchana or Dhyâni-Buddha in full Nirvâna! (See Eitel’s Sanskrit-Chinese Dictionary.) This is the jumble of contradictions, impossible to reconcile, which is given out by missionaries and certain Orientalists as the philosophical dogmas of Northern Buddhism. If not an intentional confusion of a philosophy dreaded by the upholders of a religion based on inextricable contradictions and guarded
“mysteries”, then it is the product of ignorance. As the Trailokya, the Trikâya, and the Triratna are the three aspects of the same conceptions, and have to be, so to say, blended in one, the subject is further explained under each of these terms. (See also in this relation the term “ Trisharana”.)
Dharmakâya (Sk). Lit., “the glorified spiritual body” called the “Vesture of Bliss”. The third, or highest of the Trikâya (Three Bodies), the attribute developed by every “Buddha”, i.e., every initiate who has crossed or reached the end of what is called the “fourth Path” (in esotericism the sixth “portal” prior to his entry on the seventh). The highest of the Trikâya, it is the fourth of the Buddhakchêtra, or Buddhic planes of consciousness, represented figuratively in Buddhist asceticism as a robe or vesture of luminous Spirituality.
In popular Northern Buddhism these vestures or robes are:
(1) Nirmanakâya  (2) Sambhogakâya (3) and Dharmakâya the last being the highest and most sublimated of all, as it places the ascetic on the threshold of Nirvâna. (See, however, the Voice of the Silence, page 96, Glossary, for the true esoteric meaning.)
Sambhogakâya (Sk.). One of the three “Vestures” of glory, or bodies, obtained by ascetics on the “Path”. Some sects hold it as the second, while others as the third of the Buddhahshêtras; or forms of Buddha. Lit., the “Body of Compensation” (See Voice of the Silence, Glossary iii). Of such Buddhakshêtras there are seven, those of Nirmanakâya, Sambhogakáya and Dharmakâya, belonging to the Trikâya, or three-fold quality.
Nirmânakâya (Sk.). Something entirely different in esoteric philosophy from the popular meaning attached to it, and from the fancies of the Orientalists. Some call the Nirmânakâya body “Nirvana with remains” (Schlagintweit, etc.) on the supposition, probably, that it is a kind of Nirvânic condition during which consciousness and form are retained. Others say that it is one of the Trikâya (three bodies), with the “power of assuming any form of appearance in order to propagate Buddhism” (Eitel’s idea); again, that “it is the incarnate avatâra of a deity” (ibid.), and so on. Occultism, on the other hand, says:that Nirmânakâya, although meaning literally a transformed “body”, is a state. The form is that of the adept or yogi who enters, or chooses, that post mortem condition in preference to the Dharmakâya or absolute Nirvânic state. He does this because the latter kâya separates him for ever from the world of form, conferring upon him a state of selfish bliss, in which no other living being can participate, the adept being thus precluded from the possibility of helping humanity, or even devas. 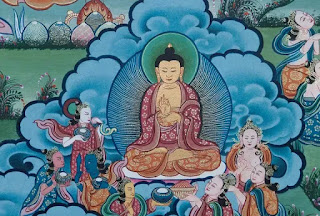 As a Nirmânakâya, however, the man leaves behind him only his physical body, and retains every other “principle” save the Kamic—for he has crushed this out for ever from his nature, during life, and it can never resurrect in his post mortem state. Thus, instead of going into selfish bliss, he chooses a life of self-sacrifice, an existence which ends only with the life-cycle, in order to be enabled to help mankind in an invisible yet most effective manner. (See The Voice of the Silence, third treatise, “The Seven Portals”.) Thus a Nirmânakâya is not, as popularly believed, the body “in which a Buddha or a Bodhisattva appears on earth”, but verily one, who whether a Chutuktu or a Khubilkhan, an adept or a yogi during life, has since become a member of that invisible Host which ever protects and watches over Humanity within Karmic limits. Mistaken often for a “Spirit”, a Deva, God himself, &c., a Nirmânakâya is ever a protecting, compassionate, verily a guardian angel, to him who becomes worthy of his help. Whatever objection may be brought forward against this doctrine; however much it is denied, because, forsooth, it has never been hitherto made public in Europe and therefore since it is unknown to Orientalists, it must needs be “a myth of modern invention”—no one will be bold enough to say that this idea of helping suffering mankind at the price of one’s own almost interminable self-sacrifice, is not one of the grandest and noblest that was ever evolved from human brain.
Part 4
Posted by Mark Casady at 07:38