Introduction to the Metaphysics of the Secret Doctrine 2/3 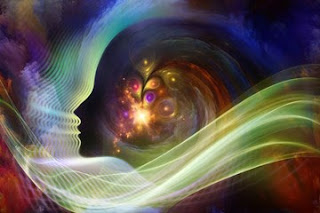 The second major principle to consider, as the first differentiation of Parabrahm, is Mulaprakriti, a Sanskrit terms which means Root-Nature, defined as Unmanifested Primordial Matter, corresponding to the notion of primal matter in ancient philosophy.

“In contradistinction to the manifested universe of matter, the term Mulaprakriti (from Mula, “the root,” and prakriti, “nature”), or the unmanifested primordial matter — called by Western alchemists Adam’s Earth — is applied by the Vedantins to Parabrahmam. Matter is dual in religious metaphysics, and septenary in esoteric teachings, like everything else in the universe. As Mulaprakriti, it is undifferentiated and eternal; as Vyakta, it becomes differentiated and conditioned, according to Svetasvatara Upanishad, I. 8, and Devi Bhagavata Purana” (SDI, 10)

a- A traditional query into the nature of matter, that can be considered a substantialist or hylozoic view of matter, is posited:

In short, it is the “upadhi,” or vehicle, of every possible phenomenon, whether physical, mental, or psychic (SD I, 330).

b-As such, matter can be viewed as pure objectivity, underlying all phenomena, the basis a dynamic septenary process with a  cyclical view of evolution, using the Indian notions of Manvantara and Pralaya, making it is possible to conceive of matter in a primary state of dissolution (SD I, 327-28).

c-The distinction between substance and matter is made. Substance being an essence of matter as manifested phenomena with primordial substance and divine thought as a highly spiritual nature, not separate to substance. To our perceptions, matter is purely subjective (SD I, 329).

d- Ultimately, this substantialist hylozoic concept is monistic, considered as the One homogenous divine Substance-Principle (SD I,  273).

e- Matter therefore is eternal and there is no inorganic matter in nature (SD1, 281).

This highly abstract spiritual aspect of matter has many terms according to its diverse states of differentiation on the septenary planes. The basic explanations gives at least six terms, with many nuances and subtleties hinted at:

a-The term Chaos, derived from various creation myths, especially the biblical concept of the spirit of God that hovers over the faces of the waters, is seen as Primordial Substance when it is in an early manifestation phase (SD I, 330).

c-In Ancient Cosmogonies, Chaos is akin to a deep ocean, primordial waters and becomes the Soul of the World (SD I, 343-44)

2- Space (was used to define Spirit-Matter and can be applied Primordial Substance as well).

a-Space is defined as Primordial Substance or Chaos in its pre-cosmic state, and is considered as the ever unseen and unknowable deity (SD I, 336).

b- It can be considered the container and body of the Universe, with its seven levels of being (the Seven-Skinned Eternal Father-Mother) (SD I, 342).

The Sanskrit term Aditi, especially when referring to cosmic substance in terms of a goddess, the celestial virgin and mother, can also be used (SD I, 333).

Âditi (Sk.). The Vedic name for the Mûlaprakriti of the Vedantists; the abstract aspect of Parabrahman, though both unmanifested and unknowable. In the Vedas Âditi is the “Mother-Goddess”, her terrestrial symbol being infinite and shoreless space (Theosophical Glossary). 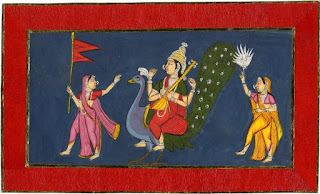 a-A prominent term for primordial substance is Akasha, the vehicle of divine thought with Ether or Astral Light being an expression of Akasha on lower planes of manifestation (SD I, 326).

Akâsa (Sk.). The subtle, supersensuous spiritual essence which pervades all space; the primordial substance erroneously identified with Ether. But it is to Ether what Spirit is to Matter, or Âtmâ to Kâma-rûpa.  It is, in fact, the Universal Space in which lies inherent the eternal Ideation of the Universe in its ever-changing aspects on the planes of matter and objectivity, and from which radiates the First Logos, or expressed thought (Theosophical Glossary).[1]

b-Adi-Sakti in her Akashic form of Universal Soul is considered a radiation of Mulaprakriti. Hence Akasha is considered as the first differenciation of Primordial Substance (SD I, 9-10).

c- In various traditions, the Universal Soul is symbolized by a feminine deity, a Mother-Godess or Heavenly Virgin figure, Sophia, Sephira, Saraswati/Vach, the Holy Ghost, etc. (SD I, 353)

a-Ether is the grossest form of Akasha, Akasha being considered the fifth cosmic principle.

Whatever the views of physical Science upon the subject, Occult Science has been teaching for ages that A’kasa — of which Ether is the grossest form — the fifth universal Cosmic Principle (to which corresponds and from which proceeds human Manas) is, cosmically, a radiant, cool, diathermanous plastic matter, creative in its physical nature, correlative in its grossest aspects and portions, immutable in its higher principles. In the former condition it is called the Sub-Root; and in conjunction with radiant heat, it recalls “dead worlds to life.” In its higher aspect it is the Soul of the World; in its lower — the destroyer (SD I, 13)

b-Furthermore, Ether is defined as one of seven states of Akasha, and can itself be divided into seven states (SDI, 331).

c- Ether is the fifth element of ancient Greek philosophy, the synthesis of the first four, to be distinguished from Aether and modern Ether (SD I, 342-43)

Another important term, Aether, also derived from ancient Graeco-Roman tradition, not to be confused with modern designations, is also synomous with Primordial Substance

Æther (Gr.). With the ancients the divine luminiferous substance which pervades the whole universe, the “garment” of the Supreme Deity, Zeus, or Jupiter. With the moderns, Ether, for the meaning of which in physics and chemistry see Webster’s Dictionary or any other. In esotericism  Æther is the third principle of the Kosmic Septenary; the Earth being the lowest, then the Astral light, Ether and Âkâsa (phonetically Âkâsha) the highest (Theosophical Glossary).

a-Aether is a substance that as mysterious properties related to the primordial state of creation (SD I, 333).

b-Ancient Aether was regarded as the medium plane between this life and the next (SD I, 343).

c-Aether and Chaos, in ancient philosophy, can be considered as Mind and Matter (SD I, 343).

There are roughly a dozen terms used in the Secret Doctrine to denote Primordial Substance, and it is important to understand that these are all essentially designating the same idea. However, the diversity of terms to serve to designate different aspects of Primordial Substance in the complex unfolding of cosmic evolution, which can be gleaned from the context of a given passage. Based on various passages, the following rough outline of the seven levels of primordial substance is proposed:

Certain notions regarding the sevenfold principles at the cosmic level are explained in relation to primordial substance.

1-Three of the terms presented can form a trinity of Chaos, Theos, and Kosmos . Theos (the Architects who pertain to both spirit and matter) fashion the primordial Chaos into the Kosmos.

In the cosmogonies of all the nations it is the "Architects" synthesized by Demiurgos (in the Bible the "Elohim"), who fashion Kosmos out of Chaos, and who are the collective Theos, "male-female," Spirit and matter" (SD I, 346).

2-- When in a pralaya state, this trinity becomes the unknowable Deity (i.e. unrevealed or hidden Deity. (SD I, 347).

4- This trinity can also be conceived as the Pre-Existing (evolved from) the Ever-Existing; and the Phenomenal— the world of illusion, the reflection, and shadow thereof (SD1 278).

b-There are seven  major elements in nature, related to the seven levels of Primordial Substance. These seven elements are manifested according to the evolution of the seven planetary rounds (SD I, 12-13).

c- All souls, Buddhis, the sixth, principle, are fundamentally identical with the Universal Over-Soul, an aspect of the Unknow Root. The soul must go through a pilgrimage through all planes to fully realize this (SD I, 18).

d- The oriental concept of Maya is adopted. All manifested life is considered illusory because finite and a differentiated aspects of the one reality, the seventh principle. . (SD1, 274) (SD I, 11 fn) (SD I, 18) 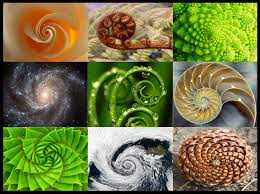 a-From the highest perspective, Parabrahm and Mulaprakriti are the aspects of the unconditioned, eternal One Principle.

“In its absoluteness, the One Principle under its two aspects (of Parabrahmam and Mulaprakriti) is sexless, unconditioned and eternal. Its periodical (manvantaric) emanation — or primal radiation — is also One, androgynous and phenomenally finite. When the radiation radiates in its turn, all its radiations are also androgynous, to become male and female principles in their lower aspects. After Pralaya, whether the great or the minor Pralaya (the latter leaving the worlds in statu quo*), the first that re-awakes to active life is the plastic A’kasa, Father-Mother, the Spirit and Soul of Ether, or the plane on the surface of the Circle. Space is called the “Mother” before its Cosmic activity, and Father-Mother at the first stage of re-awakening” (SD I, 18) (SD1  273).

b- Just as pre-Cosmic Ideation is the root of all individual consciousness, so pre-Cosmic Substance is the substratum of matter in the various grades of its differentiation (SD I, 15).

“But just as the opposite poles of subject and object, spirit and matter, are but aspects of the One Unity in which they are synthesized, so, in the manifested Universe, there is “that” which links spirit to matter, subject to object” (SD I, 16).

c-On a more basic level the duality of spirit-matter and subject-object can be used. Note that Consciousness is a term often used to describe Spirit. Strictly speaking these terms are considered two aspects of Parabrahm only.

“Spirit (or Consciousness) and Matter are, however, to be regarded, not as independent realities, but as the two facets or aspects of the Absolute (Parabrahm), which constitute the basis of conditioned Being whether subjective or objective” (SD I, 16).

d- Everything in the Universe, throughout all its kingdoms, is conscious: i.e., endowed with a consciousness of its own kind and on its own plane of perception (SD1, 274).

[1] The doctrine of the Logos is an important aspect of Theosophical metaphysics and will be reserved for a separate presentation. A brief outline can be glimpsed in the following outline: “ (1.) The ABSOLUTE; the Parabrahm of the Vedantins or the one Reality, SAT, which is, as Hegel says, both Absolute Being and Non-Being.

(2.) The first manifestation, the impersonal, and, in philosophy, unmanifested Logos, the precursor of the "manifested." This is the "First Cause," the "Unconscious" of European Pantheists.