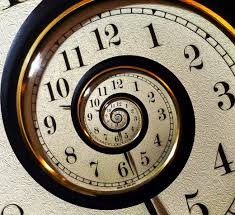 The previous quarter saw some pretty intense periods, notably with difficult Mars aspects with Saturn, Pluto and Uranus, which saw for example, intense political protests in countries like Chile, Bolivia, Irak, Lebanon, Iran, Spain, and Hong Kong. Prior to the Winter Solstice of December 21, we will have seen Jupiter move from Sagittarius to Capricorn on December 2. Jupiter is in its fall in Capricorn, therefore the Jupiter optimism and enthusiasm is dampened or it may amplify conservative Capricorn tendencies of respect, status and achievement. December 15 saw an exact Jupiter-Neptune trine, which brings good luck, open-mindedness, group awareness and new ideas. On December 26, there is a Solar Eclipse, conjunct Jupiter, which brings pleasant surprises and stimulating encounters. On January 12 2020, the Saturn-Pluto conjunction in Capricorn (beginning a new 35-year cycle) goes exact and a lunar eclipse occurs close to that on January 10, 2020, which is more difficult, with a stellium of the Sun, Mercury, Saturn and Pluto opposite to the Moon.
Freaky Deaky - Moon-Uranus-Venus T-Square
This high energy configuration is marked by unstable, capricious emotions, excentric fixations, with a general independent, distant, insecure feeling. There could also be a tendency for unusual and inappropriate passionate relationships.
Triangle of Potential - Jupiter/Sun, Uranus, Moon
However, this configuration also has a triangle of potential, which counteracts the difficult aspects in an ideal fashion, bringing confidence, stability, diplomacy, generosity, sociability, creativity, tenacity and spirituality. According to Valkyrie Astrology a ‘’Triangle of Potential is another fairly common pattern that comprises a trine, sextile and opposition, in other words two soft aspects and one hard aspect.  In this case, the planet at the apex of the trine and sextile is the key to solving the opposition.  The person will experience struggles, but by utilizing the energy of the trine and sextile will be able to make them work, so to speak.  In many respects the hard aspects are what motivate us''.
Dreams come True - Mars-Pluto/Saturn-Neptune, minor Grand Trine
This configuration has a good balance of practicality and idealism. On the one hand there is a favorable propensity for efficient, dynamic action with a good business sense and strong planning. There is also a strong intuitive sensitivity and a compassionate, altruist sense of idealism and deep investigation.  A minor Grand Trine requires work and effort to see the best results.
Neptune in/out of tune
Finally we have two aspects with Neptune that tend to balance each other out. Moon trine Neptune brings intuitive, spiritual, creative vibrations, that favor psychic experience, whereas a Mercury square Neptune brings wild imagination, absent-mindedness, escapism and lack of responsibility. 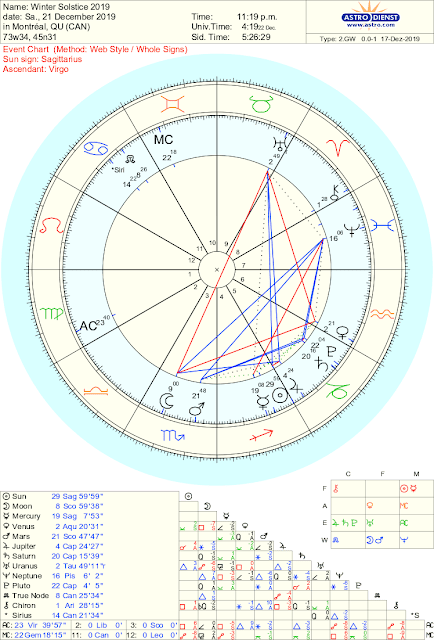 Summary
There are a lot interesting positive aspects in this chart, with the Jupiter entry into Capricorn, its exact trine with Neptune and the eclipse on December 26 all making for a positive outlook. On the solstice, even the difficult aspects are so geared with the positive ones as to provide the perfect counter-balance making for an interesting, dynamic chart where excentric, anti-social tendencies are confronted with a wave of warm altruistic idealism.
We are approaching 2020, which the final year of the decade, the 2nd of the new millenium, and the end of the first 20-year Jupiter-Saturn cycle which reboots at the Jupiter-Saturn conjunction in December 2020.One could say that the waxing phase of this cycle (the first ten years) is largely Jupiterian, marked by optimism, exuberance and enthusiasm. The waning phase is largely Saturnian, marked by realism, pessimism, and criticism, serving as an adjustment to the previous decade's excesses, overindulgences, and blind optimism. This cycle's 2010-2019 Saturnian phase has been marked by the Uranus-Pluto square in the signs of Aries and Capricorn (2010-2017) bringing radical rebellion against the modern westernized technocratic capitalist system rooted in the technological utopism of the 1950 and 60s.This deconstructive phase can do much to reform outdated modes of living that are no longer healthy.

This is the final year of this phase before a new 20-year Jupiter-Saturn cycle begins in a remarkably dramatic style with several interesting conjunctions and eclipses that mark the year in a timely fashion, centered around Saturn, Pluto, and Jupiter, all in Capricorn. After the Jupiter-Pluto conjuction on April 4 (, the 1st of 3, beginning a new 13-year cycle), we have a powerful Summer Solstice marked by an eclipse (1st of 3) and a loose Jupiter, Saturn, Pluto conjunction. The year ends with another eclipse close to the Jupiter-Saturn conjunction on December 21, after an intense series of squares with Mars and Jupiter, Saturn, Pluto. As these three new long-term cycles begin and a fresh Jupiterian phase of optimism begins, the year 2020 can be considered a phase where the old cycle winds down, hence a time of stark Saturnian realism and implacable justice, marked by three outer planets in stoic, strict, sober Capricorn.

In a way the previous phase of Jupiter in Sagittarius, its ruling sign, balanced well with Saturn in Capricorn, its ruling sign. There may have been a good dynamic play of complementary opposites. On the other hand, perhaps the extra-strong Jupiter-Saturn tandem created too much unproductive volatile opposition, so in this new phase, it will perhaps be easier to get things done as we enter a phase where conformity, discipline, and regulation of bureaucratic system becomes more imposing. According to Gray Crawford: ‘’The influence of Pluto upon Jupiter and Saturn will dredge up issues with societal structures in need of innovative reform, particularly involving global economics and systematic oppression.’’ 2019 is still very much concerned with a certain rebellious deconstructive phase, but the gains of this period need to be re-focused in a rebuilding phase with the optimism, enthusiasm, characteristic of a new era. However, the strong Capricornian influence could entail a rigid sense of conformity, discipline and strictness, which will cause tension with the close interaction with the Jupiterian idealism and the Plutonina power drive.

In the following years, the outer planets will be changing signs in a close four-year period, 2023-2026, and so by 2026, there will be very different outlook, bringing the waxing phase of the Jupiter-Sagittarius cycle into full swing. Moreover, the next Jupiter-Saturn cycle marks a definitive shift from earth sings to air signs, which will last until 2159. The previous cycles were in earth signs since 1802. Once can interpret this as the age of oil and carbon fuels, whereas the next cycle in air signs can mark a new era of alternate energies, along with satellite and computer technologies that have developed over the last 40 years.
References:
Gray Crawford. 2020 Astrology Predictions: The Beginning of a New Astrological Era
https://www.astrology.com/article/2020-astrology-predictions
https://cafeastrology.com/astrology-of-2020.html
https://www.skyscript.co.uk/moonaspects.html
Posted by Mark Casady at 19:41