T. Subba Row on the Chakras, Kundalini and Hatha Yoga 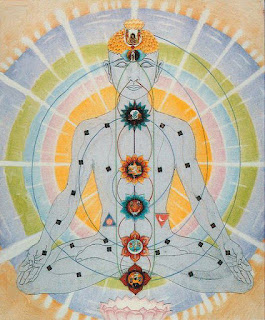 THE Sushumna is connected with the tube that runs through the centre of the spine. It is a sort of vein of magnetic electricity, and the energy passing through the Sushumna is a stream of vitalelectricity. The tube above-mentioned is connected with the ventricles of the brain.
The Sushumna begins with the Muladharam and ends in Sahasraram. The former Chakram is at the base of the spine where it forms a triangle.

The Brahmarandhra is put in different places in different books, it should be taken to be the top of the head.

You may know the action of Sushumna by feeling an accession of fire to the brain — as if a hot current of air were being blown through the tube from the bottom to the top.

Hata Yogis say that Ida and Pingala act alternately, but if you stop both of these the hot current is forced through the Sushumna. Also without having anything to do with Ida and Pingala — by practising Kumbaka alone — the Sushumna comes into play; but a Raj Yogi, without using either of these methods, has a way of rousing the Kundalini. The means the Raj Yogi employs belongs to the mysteries of initiation.

The reason why Sushumna is reckoned to be the chief of the Nadis is, because it is only through it that the Monad goes out in the case of a Yogi; and in the case of an adept, at the time of his death, his soul goes out through the Sushumna. Moreover it is the seat of circulation of the soul or Karana-sarira.

The Karana-sarira is said to be in a state of sleep, but this is no ordinary sleep, it is Yoga sleep. It is the calm after the tempest spoken of in "Light on the Path" (Rule 21). 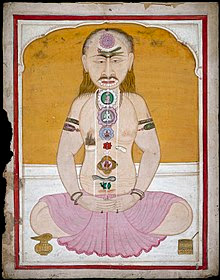 Samadhi includes the realization of Yoga Anandam, but it is a generic term used to denote several conditions.

It is absurd to suppose, as stated in some of the books, that the solar system is contained in the Sushumna. What is meant is that when consciousness is fixed for the time being in the Monad circulating in the Sushumna, the Yogi becomes en rapport with the astral light and the universal mind and thus is able to see the whole cosmos.

The six Chakrams are located in the Sthula-sarira, but they are not visible when a body is dissected, because the leaves and petals described in the books have no objective existence, but represent so many powers or energies.

For instance, Sahasraram is considered to have eight main petals, and the meaning of this is that the brain has eight poles. Similarly the letters, characters, symbols, goddesses, etc, said in the books to exist in these Chakrams, all symbolize different power.

The reason of the differences between the Chakrams is that in the seven centres seven powers are located, and it is said that as the Kundalini breaks through each Chakram it causes the man to subdue that Chakram. 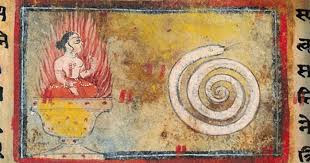 As Kundalini goes on breaking through the Chakrams one by one, it gains control over so many forces connected with the elements, the astral counterparts of which are located in the respective Chakrams. The location of the mind is said to be between the eyebrows by the Hata Yogis.

The Chakra Sammalanam mentioned in the books means that when Kundalini passes through one Chakram, it takes Its essence or energy, and so on with the rest, and finally joins all into a sort of united current.

The seven Chakrams are connected with the seven planets in the following order, beginning with Muladharam : Saturn, Jupiter, Mars, Venus, Mercury, Moon, Sun. The moon is connected with the mind of man, because it is so changeable and vacillating.

The mind of man never penetrates (as sometimes asserted) into the Chakrams but the Kundalini does so penetrate, and the mind itself will finally combine with Kundalini when the latter gets near the Agna Chakram, and then the man becomes clairvoyant. 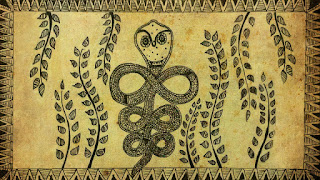 Kundalini is a power or energy in the Muladharam sometimes called the astral serpent. It has its head in the region of the navel; it can be roused by increasing the fire in the Muladharam. It is said to be like a serpent, because it moves in carves, it appears to move round and round in a circle, Ida and Pingala alternate on account of its motion.

Some say that, in order to attain Raja Yoga, one should investigate Mahavakyam ; others that the mind must be concentrated on a point and the Yogi must contemplate Parabrahm; some say one's own Guru is the true subject of contemplation, and it is enough to lead a good life; some say the repetition of the Pranava is in itself  Raj Yog, and others say you must cultivate will-power : which of these ways is the true one ? All these are necessary and much more—read "Light on the Path." The end of Raj Yog is the attainment of immortality.