On Studying the Secret Doctrine 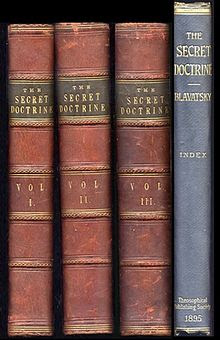 Blavatsky’s magnum opus, the Secret Doctrine, is an epic three-volume, two thousand page work that explains the creation of the universe, the solar system and the evolution of life on earth. The first two volumes (sub-titled Cosmogenesis and Anthropogenesis respectively) are each divided into three sections: the first deals with the main theme of cosmic and human evolution, the second with comparative religious symbolism, and the third is devoted to a wide variety of scientific topics. The third volume deals with eastern and western esoteric history and contains Blavatsky's Esoteric Instructions.

Obviously, one could start reading this work cold from page one and proceed sequentially. Even though the chapters aren’t always tightly sequential, the sections are complementary and so you would get a kind of overall, progressive, panoramic view of the story of the universe. The only problem is that the text is often extremely difficult. The esoteric concepts are very complex and the erudition is such that one would ideally have to have the knowledge of a Mircea Eliade and a Fritjof Capra combined to be comfortable with it. Being familiar with world mythology, Hinduism, Buddhism, the Vishnu Purana, the Zohar, the Timaeus, the Egyptian Book of the Dead, the Hermetica, and Gnosticism would be helpful.

Another way of approaching the work is to start with easier works and gradually progress to reading the full text. Below are some suggested introductory texts to make the journey easier:

The Ocean of Theosophy, William Q. Judge (1893)
This one’s a little more comprehensive, with a chapter on spiritual evolution.
https://www.theosociety.org/pasadena/ocean/oce-hp.htm 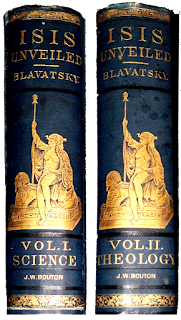 Esoteric Buddhism by A.P. Sinnett  1883
The major concepts of chain, rounds and races were first significantly presented in this work.The source material of this revolutionary work was later released as The Mahatma Letters to A.P. Sinnett in 1923 by A. Trevor Barker.
http://blavatskyarchives.com/sinnettesotericbuddhismbook.htm

Blavatsky - Secret Doctrine Commentary: Transactions of the Blavatsky Lodge of the Theosophical Society 1890, 1891.
This short work is a transcript of study classes, but the language is very clear and the difficult concepts explained with admirable simplicity, a gem.
https://www.theosociety.org/pasadena/sdcommnt/sdc-hp.htm

Theosophical Gleanings by Two Students
A collection of magazine articles from the era, a very solid summary of technical intricacies.
https://cdn.website-editor.net/e4d6563c50794969b714ab70457d9761/files/uploaded/TheosophicalGleanings_TwoStudents.pdf

Volume 3
Volume three appeared posthumously, in 1897, and was moved to volumes 12 & 14 of Blavatsky’s collected writings in the 1980s. One can consider it separate or as part of a trilogy.
Secret Doctrine Volume 3
http://www.translife.co.za/Theosophy/SecretDoctrine,The_HPBlavatsky.pdf

The Myth of the "Missing" Third Volume of The Secret Doctrine Daniel H. Caldwell
http://www.blavatskyarchives.com/sdiiipt1.htm

Short Versions
Below are some solid, basic summaries:

The Peopling of the Earth. Geoffrey Barborka
This covers volume one.
http://blavatskyarchives.com/barborkacontentspeopling.htm

The Secret Doctrine: The Classic Work, Abridged and Annotated: H.P. Blavatsky, Michael Gomes: 2009
This abridges the first sections of volumes 1 & 2 and certain parts of the symbolism sections.
https://www.penguinrandomhouse.com/books/304940/the-secret-doctrine-by-hp-blavatsky/9781585427086/

O Lanoo! ~ The Secret Doctrine Unveiled Harvey Tordoff 1999
The structure of the Secret Doctrine is based on a commentary of an eastern creation poem called the stanzas of Dzyan, which is very cryptic. This work paraphrases the stanzas in easy to understand modern English.
http://www.olanoo.com/

Easier Sections
The various chapters are only loosely inter-connected, so one can tackle the work piecemeal. Below are a selection of text sections that are both relatively easy to read and quite self-contained. Overall, volume 2 is less difficult than volume 1, so reading volume 2 first can be a good approach.