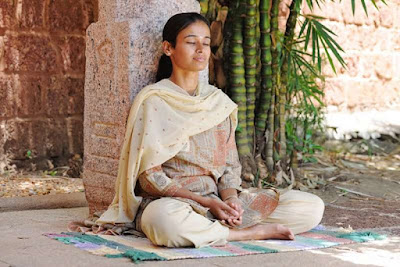 One distinctive accomplishment of the Theosophical movement was to champion two pre-eminent works of Eastern philosophy: the Bhagavad Gita and Patanjali's Yoga Sutras, and so a post on the Yoga Sutras is long overdue.  This introduction text by Rama Prasad (a fine Indian scholar and Theosophist who made some significant pioneering contributions to the field of eastern philosophy) is a basic summary of the four books of the sutras, with some suggestive observations of an esoteric nature, from his translation: Patanjalis Yoga Sutras with the Commentary of Vyasa and the Gloss of Vachaspati Misra (1912).

The aphorisms of Patanjali on the Yoga Sutras are contained in four chapters and are nearly two hundred in number. The author of the aphorisms is said to be the same Patanjali who wrote the famous commentary on Panini’s aphorisms, under the name of the Mahtabashya or thr Great Commentary. Another work is also attributed to him-the great work on Medicine. If so, he was not only a great Grammarian and a great Philosopher, but a Great Physician. He prescribed for the body, mind and spirit all three. The age of Patanjali is now generally fixed at three centuries before Christ.  (Dr. Rajendra Lala Mitra's preface to his Edition of the Yoga Aphorisms of Patanjali and also his paper on Gonikaputra and Gonardiya as names of Patanjali, pp. 361 et seq the Journal of the Asiatic Society of Bengal for 1883.)

The word Yoga comes from a Sanskrit root which means "to go to trace, to meditate." Others however derive it from a root which means to join ; and Yoke in English is said to be the same word as Yoga. Both roots are feasible - in the case of the root to join, Yoga would mean the science that teaches the method of joining the human soul with God.

The philosophy of Patanjali is essentially Dualistic. The Jivas or Purusas or human egos are separate individual entities and exist from eternity; so is also Prakriti, and so also Isvara or God. It thus believes in three Eternal Co-existent principles, the God; the Man and the Matter. 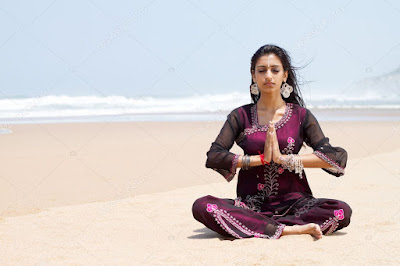 But man is found to be involved in matter, to have fallen from its pristine state of purity. The aim of Yoga is to free (viyoga) man from the meshes of matter. But the highest form of matter is mind- the Citta (a term which would include that which is technically known as manas, as Ahamkara and as Buddhi). The students of Samkhya need not be told that the first product of Prakriti or the-root-matter is Mahat or the Great Principle-the Buddhi, then comes the Ahamkara or I-principle-the matter through which can function the I-ness : and then the Manas or I , the matter which is the vehicle of thought. These three vehicles-the thought-vehicle (Manas), the  I-vehicle (Ahamkara), the Pure-Reason vehicle (Buddhi)--constitute Chitta or the subtlest form of Matter. To free man from the fetters of this Chitta is thus the problem of Yoga.

The man when freed from all vehicles, remains in his own form called Svarupa. It is not made of Prakritic matter. It is the body which belongs to man-is part of man from eternity-the body in which he dwells in Mukti in super-celestial worlds. It is the body in which the Triune God is directly active-Isvara, Prana and Sri-or the Father, the Son and the Holy Ghost. This svarupa-deha, is the body of Prana-the body of Christ of the gnostics. This is the incorruptible undecaying body, the spiritual body.

But when man is not in his Own-Form (Svarupa), he functions naturally in the lower vehicles, and his form is there the form of his vehicles -whether it be of Buddhic, Ahamkaric or Manasic matter. In fact the man of Psychology is this triad-Ahamkara, Buddhi and Manas. The human consciousness in whatever lower body it may function is always a dual consciousness-it must be alternately pleasurable or painful. Pleasure and pain are the marks of consciousness functioning in Chitta. The Svarupa consciousness is only above all pains. 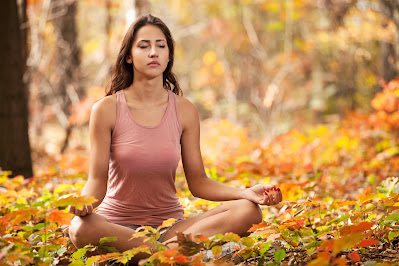 Thus both the emotional and the intellectual aspect of the Chitta or the Triune Man is to be checked. But how is it to be checked. The answer is by constant practice and want of attachment or Dispassion. There must be constant exertion to keep the mind on one point. This is called Abhyasa. The intellectual functioning of the Chitta is to be checked by Abhyasa-putting the mind to think of one object, and as soon as it strays away from it to bring it back again to the same point. This practice or Abhyasa, steadily persevered in, would make the mind one-pointed, with the help of Viveka or discrimination.

As regards the emotional sides of the mind, it must be checked by Vairagya or dispassion. Pleasure or Pain, attraction or repulsion, love and hatred can be controlled only by this world-weariness--realisation that there is nothing in this world or the next worth striving after, worth desiring or worth hating. The highest form of Vairagya will be attained when one will realise his separateness from all Prakritic vehicles-when he can say "I am not Body, or Desire, or mind, or Reason or I-ness."

The state of Samadhi or trance induced by Practice and Dispassion is two-fold-Samprajnata and Asamprajnata. In the first, the man has shut off from his consciousness all external impressions, but his internal self-initiated activities have not ceased. In the other, oven these are stopped.

There are some entities whose consciousness is in a state of Samadhi naturally, who have not to acquire it by any exertion. These are the classes of beings called Videhas and Prakritilayas. Their consciousness is cosmic. The Videhas are Devas. They are Mukta from the beginning : but in some future Kalpa they may come into the world-cycle. The Prakritilayas are Adhikari Purusas, the great office-holders in the cosmic hierarchy. They are the perfect ones of the past Kalpa.

In the case, however, of ordinary entities-for the Videhas and the Prakritilayas do not stand in need of Yoga- the method of suppressing Chitta-functions consists in having faith, energy, retentive-memory, meditation and wisdom. One must cultivate these qualities in order to become a successful Yogi. 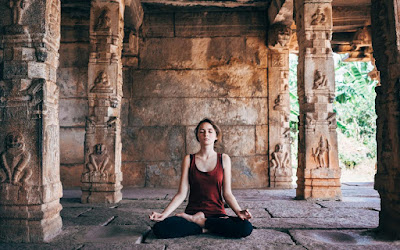 The success is quicker according to the amount of energy put in by the person in his practice. But the best and the safest method of Yoga is the love of God. Loving God with all one's heart and soul, would quickly bring about the cessation of all mental functions. God is a spirit untouched by sorrow, action and its fruition. He is Omniscient, He is the Teacher of all, and from eternity. His mystic name is Om. One must recite this Om constantly meditating on its letters and their imports; and thus all obstacles to concentration will be removed, and the Inner Self will manifest itself. The obstacles to concentration are disease, languor, doubt, heedlessness, laziness, sensuality, delusion, &c, mentioned in I. 30. But when the mind is concentrated, there is no pain or despondency, no fidgetiness, no difficulty of breathing. To attain concentration and remove these obstacles, the aspirant must practice to fix his attention on One Point, One Truth. Of course the highest Truth is God and so the constant attitude of the mind should be God-pointed.

The aspirant must strictly regulate his conduct as regards others. He must show happiness and feel happiness when dealing with those who are happy. Let him have no feeling of jealousy towards them. He must show compassion towards those who are suffering. He must not be callous to the miseries of others. He must be complacent towards the virtuous, and hate not the sinner. These are the moral attributes that he must try to cultivate. 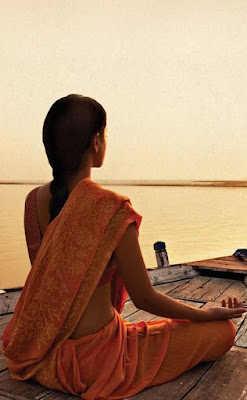 There are, however, some particular methods which quickly bring about concentration; one of them is the regulation of the breath. The monotony of slowly breathing in and breathing out brings about hypnosis. Fixing the attention on various parts of the body, such as the tip of the nose, palate, &C., are also helpful. The astral senses are developed by this means, and when the practitioner gets first-hand knowledge of astral sights, sounds, &C., his doubts are removed, and he feels more earnestness in pursuing the path.

If the astral development is not wanted, the practitioner may concentrate his attention on the light in the heart and upon the thought " I am." This also steadies the mind.

Or he may fix his attention on some great and holy saint or sage such as Zoroaster, the Buddha, the Christ, &c.

Or he may fix his attention on the objects of his dreams. Sometimes in dream he may be shown a great Deva or a great Teacher. Let him not reject it as fancy. By fixing his attention on it he may acquire steadiness of mind.

By such concentration all mental impurities are removed, and the mind becomes like a pure crystal that reflects truly and correctly all objects that are presented to it. They are no longer distorted pictures or dim and dull reflections of outer verities. The mental vehicle is purified, and the knowledge that now arises is far more true than any knowledge that he had before. The mind, however, enters as an element in every such knowledge, and the. past ideas and memories tinge such knowledge. This state is called Savitarka or mixed up trance. But when the mind reflects only the object, without adding to it anything from its own associations and storehouse, it is pure idea and is Nirvitarka Samadhi. In this state the light of the Self shines out on purified mind. It is not only a pure crystal that faithfully reflects the outer objects, but it is illumined, as if it were, by a light which was dormant within its own inmost centre. Such a mind is called the Truth-bearing mind. It has truth within it and truth without-a mass of truth -a tree carrying the fruit of truth-a female full with truth. Up to this time the objects of the mind were mere ideas and inferences, mere thoughts. 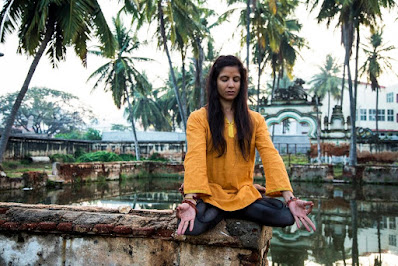 Now the contents of the mind are things, the very things as it were, and not merely thoughts of things. The mind modifies itself, as it were, into - the very thing itself; and thus the thing is known more truly and essentially than it was known ever before. In this state of mind, the time and space cannot impede the perception of the object. The object may be inside a box, behind a wall or hundreds of miles off, the mind faithfully reproduces it. The object may be the subtlest and the minutest, not visible even under the strongest microscope, the mind reproduces it. For it no longer depends upon the senses for its knowledge, but has become the all-sense itself. In this way the mind becomes the highest sensory: by constant practice the mind gets into the habit of reflecting the trance objects. But even this habit is ultimately to be conquered if one wishes to rise to the higher levels of what is called the seedless trance.

The First Chapter thus, in fifty-one aphorisms, gives what may be called the theory or the science of Yoga. An ardent and intelligent person can learn enough from this chapter alone to become a practical Yogin. But for men of ordinary intellect, more detailed teaching is necessary. The Second Chapter enters into such teaching. It may be called the art of Yoga-the technique of it.