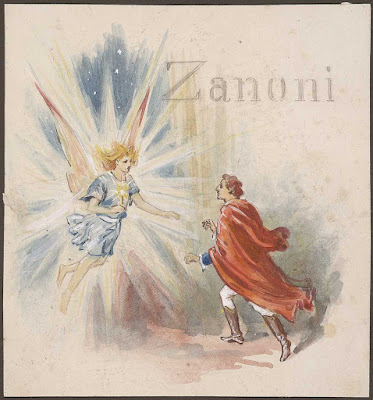 Zanoni by Sir Edward Bulwer Lytton was originally published by Saunders and Otley, London, in three volumes, in 1842. According to the author: ‘’As a work of imagination, “Zanoni” ranks, perhaps, amongst the highest of my prose fictions.’’

A friend of Charles Dickens, he himself was no Dickens in terms of writing with social and psychological insight, although he he was socially conscious and pursued political causes and was a conscientious historical novelist with works such as The Last Days of Pompeii (1834).

He was a prolific, versatile writer, very popular, with a knack for putting characters into dramatic situations and getting them out suspensefully, and he remains quite popular with the book collector market. Zanoni has become quite a studied work in academia, considered as an exemplary type of the the supernatural Gothic hero, pioneered for example with Zastrozzi by Percy Bysshe Shelley in 1810.

Zanoni is a very lyrical romantic tragedy set against the backdrop of the French revolution, featuring the last two members of a secret group of alchemists who have discovered the ‘’elixir of life’’. Beginning in an artistic milieu of painting and music, it is full of picturesque melodrama and often digresses into idealistic asesthetic reflexions typical of the romantic period, including abundant quotes from various poets such as Ariosto and Goethe. The mystical scenes are quite inspired.

The characters of Zanoni and his teacher Mejnour can be said to be loosely based on the occult historical figures of Cagliostro and the Count of St-Germain. The novel became quite popular in Theosophical circles, with several authors such as H. P. Blavatsky, Mabel Collins, Mitford Godolphin, William Q. Judge, Franz Hartmann, T. Subba Row and the Mahatma Letters to A. P. Sinnett all comment on its use of mystical adepts, the elixir of life, the augoeides/Adonai character and especially the chapter called ‘’The Dweller on the Threshold’’.

The occult aspects of the novel cannot be said to be realistic portrayals of theosophical doctrines (there is no cognoscence of reincarnation, for example), but rather imaginative fantasized dramatizations of certain occult realities that are in an esoteric spirit that theosophical writers appreciated along with several profound esoteric observations. With A Strange Story (1850) and The Coming Race(1871) (a seminal, influential science-fiction work which pioneered the hollow earth theory) , it can be considered part of Bulwer Lytton’s trilogy of occult novels which are full of mystical interest. 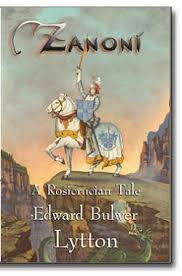 Zanoni – an initiate into Chaldean wisdom

Clarence Glyndon – an English artist who aspires to the secret knowledge

Nicot – a debased and selfish revolutionary

Gaetano Pisani is a gifted Neopolitan Italian violinist who composes strange music. Viola, his beautiful and sensitive daughter becomes an opera singer. When both of parents die, she is left alone. Clarence Glyndon is an aspiring British painter who is enamored with Viola. One day, a charming, eloquent, mysterious visitor, Zanoni, visits her town and attends one her concerts.

Glyndon pursues courtship with Viola and meets the charismatic Zanoni, who is the talk of Neapolitan high society, and learns of the existence of secret spiritual arts. Zanoni warns him of the difficulties and suggest that he marry Viola instead.

Glyndon is struck with a powerful desire to learn the occult arts and is introduced to Zanoni’s teacher Mejnour and begins preliminary studies. Zanoni becomes enamored with Viola, as does the Italian prince Macari, who tries to poison Zanoni, who kills the prince in a swordfight.

Book iv. — The Dweller of the Threshold. (11 Chapters)

Viola and Zanoni leave Italy to live at Zanoni's retreat in Greece They have a son. Zanoni begins to groom his son with mystical influences. Glyndon is tried in his mystical apprenticeship and fails. He partakes of the elixir of life improperly and awakens the Dweller on the Threshold. Viola and Zanoni are forced to leave their home in Greece due to a plague.

Glyndon returns to worldly life and is successful in business, but is unstable and dissolute. He reunites with his sister, who dies of illness. He renews acquaintances with Nicot, whom he had met in Italy, who informs him of the storms of the French Revolution that are brewing.

Glyndon meets Viola in Paris and influences her to leave Zanoni, influenced by her superstitions that he is in league with devil. She leaves him,  taking their son with her.

Glyndon attempting to escape Paris during the period of persecutions following the French Revolution, asks Nicot for passports for him and Viola. But Nicot, to gain revenge because his advances to Viola were rejected, has her imprisoned with her child, to be executed by the guillotine. Zanoni meets Glyndon and with Zanoni’s help, he realizes the errors of his bitterness and dissolute ways and regains spiritual faith. The dweller on the threshold that had been haunting him begins to fade. Meanwhile Zanoni, possessing important political information concerning Robespierre, persuades an official to allow Zanoni to be placed ahead of Viola on the execution list. They are reunited in prison. Zanoni is executed and Viola is saved, because her execution date coincides with the downfall and execution of Robespierre on July 28 1794, but she dies of grief. The child survives.