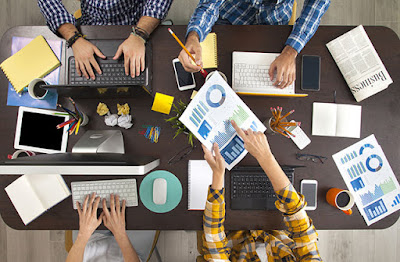 Taking Care of Business
2020 is a year of beginnings and endings -a year to process the end of the first 20-year period of the new millennium; also a year to plan and prepare the hopeful new decade as well as the next 20-year Jupiter-Saturn cycle. This pivotal year is marked by strong quarterly punctuations, with conjunctions and eclipses occurring close to the solstice periods.
The year kicked off with a bang, inaugurating a new 35-year Saturn-Pluto cycle with an eclipse on January 10 and a Saturn-Pluto conjunction on the 12th. According to Maurice Fernandez:
Power and resources can be material but can take the form of knowledge, or spiritual potency, as well. Saturn–Pluto reflects a lesson about the right use of power, so this cycle is also associated with corruption and abuse. Since it holds the key to the “bank coffers,” it also describes the temptation to disregard moral standards and use global resources to satisfy one’s greed. Sooner or later, corruption is exposed, for Saturn represents the karmic consequences of misaligned actions; however, “later” is more often the case, because exposing corruption can take time.
In the week preceding this, there was the tumultuous events of a US-directed assassination of a top Iranian army general closely followed by the downing a Ukrainian commercial airplane by the Iranian army. It was on the day of the conjunction that Iran declared responsibility for the downing, stating that it was accidental, after having denied involvement previously.  There was a massive winter storm in the US that stretched from Texas to Michigan. North Korean diplomats announced a desire to back away from nuclear armament discussions and the impeachment process for president Trump was officialized on January 15th, with an acquittal decision on February 5th.
The week of the conjunction and eclipse was also marked by major earthquakes in Puerto Rico and a volcanic eruption in the Philippines (Fernandez notes:‘’Angular aspects between Saturn and Pluto are also known to reflect pandemics and natural disasters, particularly seismic and volcanic activity’’.) In Great Britain, the formal Brexit process was made official. Taiwan elected a strongly anti-Chinese president while China announced a draconian ban on foreign teaching materials. In Australia, climate protests sparked by the massive forest fires reached a peak. It was at this time also that a worldwide coronavirus pandemic began to manifest itself, escalating over the next couple of months. Interestingly, Robert Hand writes of the Saturn-Pluto conjunction: ‘’Sometimes government or other officials will impose heavy burdens that greatly restrict your freedom of movement. It is also possible that some incident or accident may affect your health and thereby restrict your freedom of movement.’’ (p. 359).
At the Spring equinox, on March 20th, we are fast approaching an exact Jupiter-Pluto conjunction, on April 14th, which will occur three times this year, again on June 30 and November 2, starting a new 13-year cycle. According to Gray Crawford:
Since Jupiter and Pluto are uniting in Capricorn, they will be under rulership of the slow and steady Saturn, bringing tests that temper the potential excess and inflation of Jupiter. Jupiter, Pluto, and Saturn transiting through Capricorn will bring lessons of maturity and responsibility cultivated through acceptance of natural cycles of change. The combination of Jupiter and Pluto can incite extreme ambition for personal power, yet their transit through Capricorn along with Saturn means that we will need to adjust aspirations to contend with the limitations we face in regard to material resources and available time and space. The difficulties or crises we endure will bring revisioning of what needs to be nurtured and developed—and what needs to be shed and let go.

Practical Idealistic Cooperation (Mars/Jupiter/Pluto/Saturn stellium in a minor grand trine with Venus and Neptune)
This is a very earthy chart, with six planets in practical earth signs (four in Capricorn, two in Taurus). The remaining three planets are in emotional water sign Pisces. The Moon is in the social air-sign of Aquarius.
Capricorn is all about social values, maintaining the social order, valuing roles in society. With Saturn in Capricorn, ruler of this sign, these concerns are reinforced, and can bring restrictions to enforce the rules that maintain social order. The keynote for this sign is conformity, following the rules by the book, complying with regulations by the letter, otherwise things will not proceed. Mars, Jupiter, Pluto and Saturn are all in conjunction, thus forming a stellium, a powerful configuration that gives a preponderant influence to the sign it is in.
The Mars-Jupiter conjunction is the tightest aspect of this chart. Mars in Capricorn brings stability, reliability, discipline. The conjunction adds confidence, enthusiasm, drive, determination, with a risk of overworking. Otherwise this stellium emphasizes the practical consequences of getting rid of things that are no longer working. The focus is on realism, concrete results, practical goals, thereby cutting through mirages, delusions, false promises, posturing, and seduction. Results come through hard work and effort, with no shortcuts. Accountability, responsibility, attention to details, the fine print, and bureaucratic procedures are key concerns.
Venus sextile Neptune brings artistic imagination, strong compassion, spiritual feelings, sensitivity, tolerance and optimism.
Capricorn Stellium sextile Neptune adds empathy, idealism, and imagination.
Neptune in Pisces (2011-2025), its ruling sign, is at the apex of this minor grand trine, its dreamy idealistic  nature brings strong spiritual and artistic inspiration, forming an interesting counterpoint to practical, realistic Saturn in Capricorn. The previous Neptune in Pisces passage (1847-1861) was marked by the spiritualism movement that prefigured Helena Blavatsky and the theosophical movement, and in the arts, the Pre-Raphaelite movement and late Romanticism. This period can bring confusion, addiction (the opioid crisis), escapism (video game technology). It also governs medicine and health concerns.
Overall, this minor grand trine tends to lighten the rather tense, stern, inquisitive, power-focused restrictive materialism of the Capricorn stellium with Neptunian idealism and Venusian empathy to encourage the possibility of practical compassionate social cooperation. 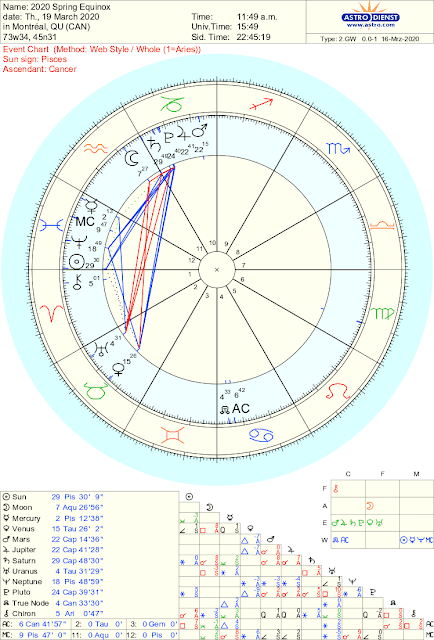 Additional Aspects
The second tight aspect is Sun sextile Saturn, which brings a sense of being grounded and stable, slow, and steady productivity with focus, practicality and efficiency.
Further tight aspects are Mercury (in Pisces) sextile Uranus (in Taurus), which brings imagination and creative thinking, especially with environmental and financial concerns.
Moon square Venus brings feelings of emotional repression, fear of commitment and inappropriate attractions.
After a tumultuous Winter, the Spring season should be the mildest season of the year, as the Summer season is marked by three eclipses around the Solstice point (June 5, 21, July 5) and Autumn by intense Mars squares with Jupiter, Pluto and Saturn and two eclipses near the Winter solstice period (November 30, December 14) and the Jupiter-Saturn conjunction (December 21).

Maurice Fernandez:The Saturn – Pluto Conjunction And the transits for the year 2020

Thanks to Ronnie Pontiac for the Robert Hand/Coronavirus reference.
Posted by Mark Casady at 12:05