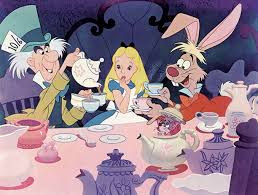 This is the last quarter before the year 2020 which begins with a momentous Saturn-Pluto conjunction and ends with an epochal Jupiter-Saturn conjunction, marking the beginning of a new era. The Fall Equinox chart is very similar to the Summer Solstice chart, only more intense. We have two fairly difficult T-Squares, but the oppositions on both also form a Triangle of Potential, which help balance things and make them easier to deal with. See Summer Solstice post: https://theosophyproject.blogspot.com/2019/06/astrology-summer-solstice-june-21-2019.html
Conspiracy Theories (Mars-Jupiter-Neptune T-Square)
This aspect can bring unrealistic, deluded views and can foster extremist, fanatical tendencies. It can even lead to foul play, slander and fraud. Religious fanaticism could be an issue (Jupiter in Sagittarius square Neptune in Pisces). For example, there is a fanciful New Age prediction of an imminent collective shift of consciousness that is quite popular on the Internet. As always, vigilance and discrimination is encouraged.
With the Triangle of Potential, the situation is helped with a perseverent, productive, respectful attitude and a sense of dedication to just causes (Saturn/Pluto sextile Neptune, Mars trine Saturn). There could be nit-picking over details (Mars in Virgo). One also tends to have high energy, ambition and enthusiasm, but with a domineering tendency (Mars Conjunct Sun).
Failure to Connect (Moon-Mercury/Venus-Saturn T-square)
Although there is a general feeling of friendliness and social graces (Mercury/Venus conjunction), there is an underlying insecurity and fear of rejection. There is also a tendency for anxiety, harsh speech, and a general sense of inhibition, shyness and frustration in relationships. This can lead to a tendency for emotional manipulation and impulsive sexual initiatives.
The Triangle of Potential brings a sense of close family ties, a practical idealism and an effective assertiveness to help balance things. (Moon trine Neptune, Saturn sextile Neptune) Moreover, there is another key aspect for both T-Squares which can bring an outgoing, supportive, sympathetic attitude and an articulate, philosophical outlook to help balance things (Venus/Mercury sextile Jupiter). 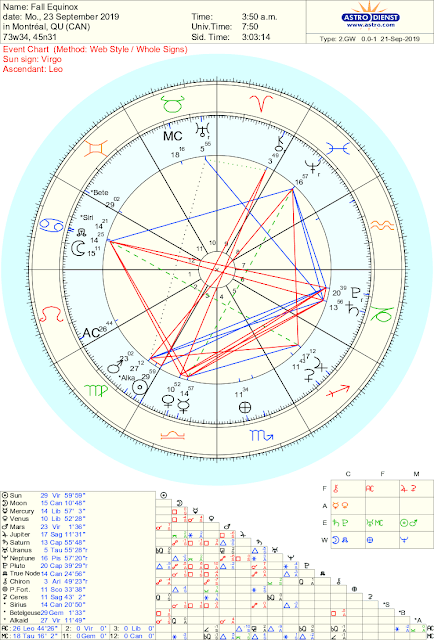 With Pluto and Saturn opposite Cancer, lots of retrograde planets, two eclipses, and some difficult Mars aspects, the Summer may have been quite challenging. With the Fall season, the year ends in an interesting way with the year's two main aspects (Saturn sextile Neptune and Jupiter square Neptune) at their most intense.  Therefore, on the one hand, we have a strong tendency for delusion and deception, fueled by extremism and fanaticism. On the other hand, there can be strong feelings of insecurity, alienation and anxiety, which can lead to manipulation and rejection. However, there are some strong, friendlier, well-placed aspects that can provide the key to providing productive resolutions of underlying issues. A T-Square is an intense, high energy aspect, and along with the Triangles of Potential, which bring positive, constructive attitudes, there is a distinct opportunity for resolving issues that can lead to personal transformation, in the sense that underlying issues can be better resolved if a catalyzing situation causes them to be brought out in the open, so they can be identified and examined.
In the last two years, I've been focusing on the aftermath of the strong revolutionary energies (the 7 Uranus - Pluto squares) which lead to rebuilding and re-organizing for a new phase. However, this re-building process has probably been rather slow and sluggish and probably won't gain steam until the end of the rocky year which 2020 promises to be. Once the Jupiter-Saturn conjunction occurs at the end of 2020, things should start to move forward in a big way, as a new decade and 20-year cycle begins in a phase of Jupiterian optimism.
Posted by Mark Casady at 17:36