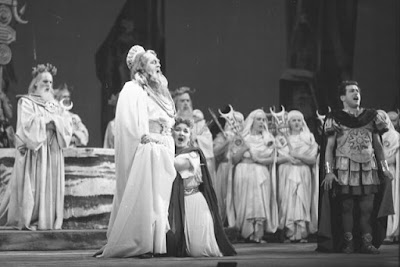 Shake It Up
On the positive side, the Sun  has a sextile to Uranus which can be communicative, outspoken, positive, original, with some defensiveness. Uranus stations direct on this day, at the same time that Neptune stations retrograde. For the second of three times this year, both Jupiter square Neptune, on June 16, and Saturn sextile Neptune, on June 18, go exact.  These are the two main defining aspects of 2019. “While Jupiter square Neptune can test your faith with disappointments, Saturn sextile Neptune gives a healthy dose of reality that lowers the risk of delusion and deception. It also helps you channel your inspiration and enthusiasm into hard work to manifest your hopes and dreams” (Astrology King). Moreover, the Solstice preludes a July 2, total solar eclipse which is a great chance to make a fresh start, followed by a partial lunar eclipse on July 16, with Pluto, can portend intense emotions and compulsive behavior.
The War of the Words
(Mercury/Mars in Cancer opposite Saturn/Pluto in Capricorn) With Mars conjunct Mercury in Cancer, there is a tendency for intellectual combativeness concerning personal needs and relationships with some moodiness and defensiveness. With Mars/Mercury opposite to Saturn/Pluto, especially in the previous week,  there is a strong conflict with personal desires versus collective rules and responsibilities. Impulsiveness, aggressiveness, harshness can emerge and strong, caustic verbal sparring can result. Revolts against rigid control and oppressive authority/pressures can be significant issues. Power struggles, depression, and low self-esteem issues may emerge. Underlying tensions regarding one’s personal feelings about social roles and responsibilities can reach a boiling point. In some cases it can be very volatile and explosive. At its most intense on June 18-19. Conflict and crisis may emerge and boil over, but strong conciliation energies will manifest themselves as well.
Triangle of Potential
(Mars/Mercury trine Neptune in Pisces, Saturn/Pluto sextile Neptune) According to Valkyrie Astrology a ‘’Triangle of Potential is another fairly common pattern that comprises a trine, sextile and opposition, in other words two soft aspects and one hard aspect.  In this case, the planet at the apex of the trine and sextile is the key to solving the opposition.  The person will experience struggles, but by utilizing the energy of the trine and sextile will be able to make them work, so to speak.  In many respects the hard aspects are what motivate us.  If life was always easy we'd have a lot less incentive to grow.  A Triangle of Potential will give a person just enough friction to utilize latent talents and abilities that otherwise might lie dormant.’’ (https://www.valkyrieastrology.com/Makeover/aspects.html)
Mercury/Mars trine Neptune brings a sense of balance between intuitive ideas and practical action and realisation., good character judgement, a sense of effective expression and altruism. Saturn/Pluto sextile  Neptune brings a sense of patience and hard work in realizing alternative changes and constructive aims. These two aspects may provide the resources to manage the difficult oppositions in a productive way.
Creative Differences
(Venus-Jupiter-Neptune T-Square) With Venus in Gemini opposite Jupiter in Sagittarius you can have vanity, moodiness, spoiled behaviour, religious differences. Venus square Neptune can be marked by defensiveness, subterfuge, romantic delusions. Jupiter square Neptune brings exaggeration, confusion, deception, emotional excess, self-indulgence, religious enthusiasm. This T-Square could be an aspect you would find with an opera diva. There is no shortage of drama and moodiness, but there can be strong creative energy as well. Once again, this opposition is linked to some easy aspects that form another triangle of potential. Moon trine Venus brings charm, gentleness, optimism, refinement, secure relations, and creativity. Moon sextile Jupiter brings generosity, emotional sympathy, gratitude, religious idealism, integrity, and sociability. An opera performance under this aspect can be quite an inspired event. It can also be a good opportunity to reflect on the coherence and validity of your spiritual beliefs and values and how they affect your relationships.
Summary
With Mercury conjunct Mars, Venus in Gemini, Sun sextile Uranus, and Moon in Aquarius, we have a healthy level of verbal expressiveness. People will probably not be holding back when it comes to speaking their mind. Compared to recent years, I see 2019 as relatively less dramatic, as a buildup for the closing of the 20-year Saturn-Jupiter cycle next year. This solstice marks one of the more difficult periods of the year (with Saturn and Pluto in Capricorn, in opposition to summer sign of Cancer, most summers in recent memory have been rather tense). There can be volatile mishaps and confrontations, with a rather free tendency for outspoken, blunt, excentric expressiveness. People will tend to feel very passionate about their beliefs and opinions. Problems of unrealistic expectations in relationships may emerge, with long-standing frustrations coming to a boil. There is also an undercurrent of patient, compassionate, sympathetic feeling forming two triangles of potential, which makes for an interesting opportunity for overcoming obstacles and effecting lasting reconciliations. Concentration won’t be easy, but look to Neptune for deep reserves of idealistic altruism and the Moon for sympathetic sociability. 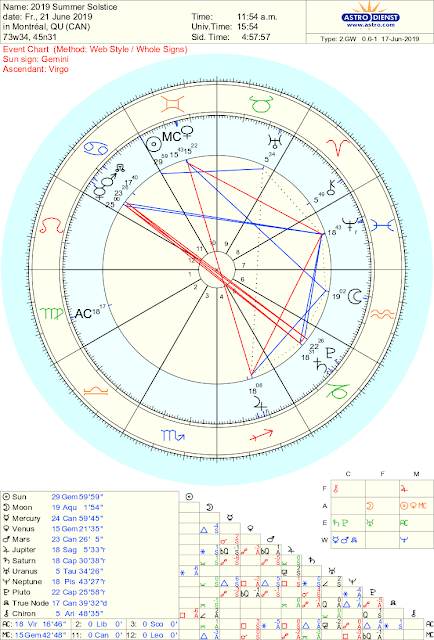 Retrograde Periods
Retrograde motion can signify revisiting past experiences that are linked to the planets domain and also revealing elements pertaining to that planet’s energy that were not properly processed, causing a slowing of forward movement.
Jupiter retrograde  (April 10 - August 11)
This year the main theme is romance and intimate relationships.
Saturn Retrograde ( April 29 - September 18) The lessons relate to your thoughts and words. It will be especially challenging if you have a history of teasing or verbally abusing people.
Pluto retrograde (April 24 - October 3) This is a regular cycle lasting five months every year, during the opposition to the Sun; a time of reflection about power and control in your life.
Neptune retrograde (June 21 – November 27). Neptune retrograde in transit is a regular cycle lasting 160 days every year during the opposition to the Sun. It can internalize your fears and anxieties by stripping away the illusions, dreams and false realities that have clouded your vision. (Astrology King)
From the perspective of the 20-year Jupiter-Saturn cycle, one could say that generally, Jupiter marks the first ten years with optimistic, exuberant, often quite naïve, energy, whereas Saturn brings a more serious, realistic, sombre energy. The Saturn phase can be considered as an adjustment, adaptation, analysis phase in relation to the exuberant energies initiated by Jupiter. The 2016-2020 period can be seen as a consolidation of the Saturn phase, marked by an increasing socio-political conservatism which witnessed the rise in right-wing nationalist political movements. Therefore 2020 fittingly will cap off this starker phase with a Saturn-Pluto conjunction in Capricorn, with an intense final quarter marked by a Mars retrograde motion in Aries, often in opposition to Jupiter, Saturn and Pluto.
According to Astrology King : “Saturn conjunct Pluto means hard work and serious business. You will need patience and determination as you face extra responsibilities with less time and resources to get the job done. You may experience loss, hardship or disappointment as you learn what it is that you must let go of or change. Is something is broken you must fix it or throw it out. Immoral or unethical behavior such as lying, manipulation or breaking the law would have serious consequences that would further restrict your options and freedom. This is a time for deliberate, well-considered change. This is a slow, evolutionary process that builds new foundations on which to prosper in coming years.”
The 2021-2025 period marks the start of a new 20-year Jupiter-Saturn cycle in its optimistic, exuberant Jupiter phase, which will see four outer planets shift into new signs, so by 2025 all the components of the 2021-2030 half of the cycle will be in place. One of the main challenges pertains to the information age. The  political re-configurations prompted by a technological revolution that gives us hyper precise up-to-the minute information and knowledge is out-of-sync with social structures that are not equipped to deal with this new paradigm of hyper information. The modern western social structure is still to a large extent based in the more simplistic technological space age optimism and monolithic centralized bureaucratic social structures of the 1960s, which were remarkably short-sighted, in retrospect.
According to Kosmic Mind: “The internet revolution unleashed several social and economic structures from the limitations of physical space. Consider the storage of mass amounts of data and information onto "cloud networks," or how much of our daily life revolves around smartphones and wifi signals. Jupiter and Saturn's conjunction in Aquarius begins the next two centuries of conjunctions solely in the air element and in a sign associated with innovation, ingenuity, and independence, this is likely to begin a revolutionary social and economic shift.” (2020: In the Shadow of Saturn and Pluto, January 11, 2019)
Robert Hand observes: ''One danger of this transit is that Pluto can signify tremendous evolutionary energies, which Saturn restricts. This can lead to an apparent suppression of the Pluto force. When the suppressed force erupts, it may be dangerous, explosive and quite violent. As you are more and more restricted by circumstances and the need to use your resources conservatively, do not simply hold in your energies. Build new structures to correct the problems that you face now, and concentrate all you energy on bringing about necessary evolution in your life. Saturn can give form to Pluto as well as repress it, and then it is much more fruitful.'' (Planets in Transit, 358-59)
Posted by Mark Casady at 19:25