Anna Kingsford on the Divine Feminine 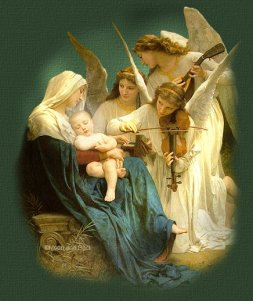 22. For, ignoring the understanding, and putting asunder that which God has joined together, — Faith and Reason, — they have made something other than Mind the criterion of truth. To this divorce between the elements masculine and feminine of man’s intellectual system, is due the prevailing unbelief. For, converted thereby into superstition, religion has been rendered ridiculous ; and instead of being exhibited as the Supreme Reason, — God has been depicted as the Supreme Unreason. Against religion, as thus presented, mankind has done well to revolt. To have remained subject, had been intellectual suicide. Wherefore the last person entitled to reproach the world for its want of faith is the Priest ; since it is his degradation of the character of God, that has ministered to unbelief. Suppressing the “woman,” who is the intuition, by putting themselves in her place, the priests have suppressed also the man, who is the intellect. And so the whole of humanity is extinguished. Of the influences under which Sacerdotalism has acquired its evil repute, a full account will appear as we proceed. (The Perfect Way, Lecture 1, Part 1, 23)
34. As Living Substance, God is One. As Life and Substance, God is Twain. HE is the Life, and SHE is the Substance. And to speak of HER, is to speak of Woman in her supremest mode. She is not “Nature ;” Nature is the manifestation of the qualities and properties with which, under suffusion of the Life and Spirits of God, Substance is endowed. She is not matter ; but is the potential essence of Matter. She is not Space ; but is the within of space, its fourth and original dimension, that from which all proceed, the containing element of Deity, and of which space is the manifestation. As original Substance, the substance of all others substances, She underlies that whereof all things are made ; and, like life and mind, is interior, mystical, spiritual, and discernible only when manifested in operation. In the Unmanifest, She is the Great Deep, or Ocean, of Infinitude, the Principium or Archë, the heavenly Sophia, or Wisdom, Who encircles and embraces all things ; of Whom are dimension and form and appearance ; Whose veil is the astral fluid, and Who is, Herself, the substance of all souls. 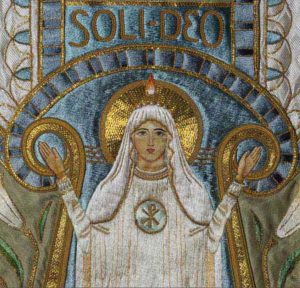 35. On the plane of manifestation, as the Soul macrocosmic and microcosmic, She appears as the Daughter, Mother, and Spouse of God. Exhibiting in a perfect Humanity the fullness of the life she has received of God, she is mystically styled the Blessed Virgin Mary, and in token of her Divine Motherhood and heavenly derivation and attributes, is represented as clad in celestial azure, and bearing in Her arms the infant Man, in whom, regenerate and reborn of Her own immaculate substance, the universe is redeemed. In Her subsist inherently all the feminine qualities of the Godhead. As Venus, the brightest of the mystic Seven who represent the Elohim of God, She corresponds to the third, the spirit of counsel, in that counsel is wisdom, and love and wisdom are one. Thus, in mystical art She is portrayed as Aphrodite the Sea-Queen, and Mary the Star of the Sea, and as the soul from whose pure intuition of God proceeds the perfected man. Correspondingly, in mystical science She appears as Sodium, or Salt, whose ray in the spectrum, as the place of Venus among the planets, is the third, whose light is the brightest, and whose colour is the yellow. Among the metals, copper is dedicated to Venus. For of copper the crystals are the deep sea-blue. And, inasmuch as She, as love, is the enlightener, and as salt the purifier, and the pure in heart see God, so is its sulphate a balm for ailing eyes. As Pallas or Minerva, She is “Our Lady of Victories,” adversary of demons and dragons, wearing the panoply of heaven, and the insignia of wisdom and righteous war. As Isis or Artemis, She is pre-eminently the Initiator, the Virgin clothed in white, standing on the Moon, and ruling the waters.
36. Also is She “Mother of Sorrows,” whose bitterness pervades all things below ; and only by her salting with affliction, purification by trial, and purchase of wisdom by dear-bought experience, is the perfection that is of Her attained. Nevertheless She is also “Mother of Joys,” since Her light is gilded by the solar rays ; and of Her pain and travail as the soul in the individual, comes the regeneration of Her children. And She is for them no more a sea of bitterness when once their warfare with evil has been accomplished : for then is She “our Lady, Glory of the Church triumphant.” Thus is the Microcosm. 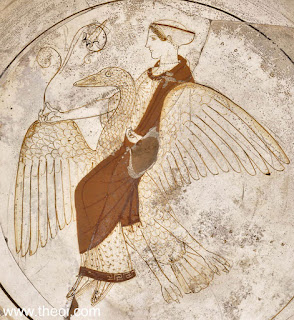 37. In the Macrocosm She is that Beginning or Wisdom wherein God makes the heavens and the earth ; the substantial waters upon whose face He, the Energizing Will, moves at every fresh act of creation, and the ark or womb from which all creatures proceed. And it is through the “gathering together”, or coagulation, of Her “waters” that the “dry land” of the earth or body, which is Matter, appears. For she is that spiritual substance which, polarizing interiorly, is — in the innermost — God ; and coagulating exteriorly, becomes — in the outermost — Matter. And She, again, it is, who as the soul of humanity, regaining full intuition of God, overwhelms the earth with a flood of Her waters, destroying the evil and renewing the good, and bearing unharmed on Her bosom the elect few who have suffered Her to build them up in the true image of God. Thus to these is She “Mother of the Living.”
38. And as, on plane physical, man is not Man — but only Boy, rude, forward, and solicitous only to exert and exhibit his strength — until the time comes for him to recognize, appreciate, and appropriate Her as the woman ; so on the plane spiritual, man is not Man — but only Materialist, having all the deficiencies, intellectual and moral, the term implies — until the time comes for him to recognize, appreciate, and appropriate Her as the Soul, and, counting Her as his better half, to renounce his own exclusively centrifugal impulsions, and yield to Her centripetal attractions. Doing this with all his heart, he finds that She makes him, in the highest sense, Man. For, adding to his intellect Her intuition, She endows him with that true manhood, the manhood of Mind. Thus, by Her aid obtaining cognition of substance, and from the phenomenal fact ascending to the essential idea, he weds understanding to knowledge, and attains to certitude of truth, completing thereby the system of his thought. 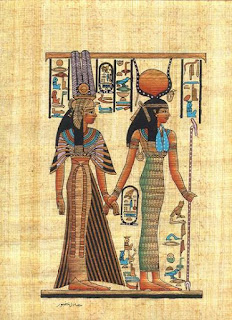 39. Rejecting, as this age has done, the soul and her intuition, man excludes from the system of his humanity the very idea of the woman, and renounces his proper manhood. An Esau, he sells, and for a mess of pottage, his birthright, the faculty of intellectual comprehension. Cut off by his own act from the intuition of spirit, he takes Matter for Substance ; and sharing the limitations of Matter, loses the capacity for knowledge. Calling the creature thus self-mutilated, Man, the age declares by the unanimous voice of its exponents, that Man has no instrument of knowledge, and can know nothing with certainty, excepting — for it is not consistent even in this — that he can know nothing. Of this the age is quite sure, and accordingly — complacent in its discovery — styles itself Agnostic. And, as if expressly to demonstrate the completeness of its deprivation in respect to all that goes to the making of Man, it has recourse to devices the most nefarious and inhuman on the pretext of thereby obtaining knowledge.
40. Whereas, had but the soul received the recognition and honour her due, no pretext had remained for the abominations of a science become wholly materialistic. For, as the substance and framer of all things, she necessarily is competent for the interpretation of all things. All that she requires of man, is that she be duly tended and heeded. No summit then will be too lofty of goodness or truth, for man to reach by her aid. For, recognized in her plenitude she reveals herself in her plenitude ; and her fullness is the fullness of God.
(The Perfect Way, Lecture 2, Part 3, 36-40)
Posted by Mark Casady at 13:29