Through the Gates of Gold Chapter 4 The Meaning of Pain, Part 2a 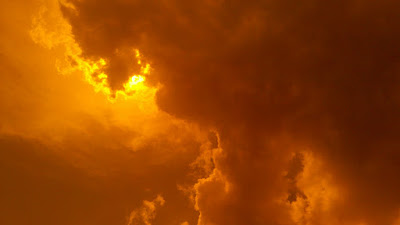 This chapter introduces the idea of the inner god. It begins by comparing humans to a kind of tree of knowledge of good and evil.
If we carefully consider the constitution of man and its tendencies, it would seem as if there were two definite directions in which he grows. He is like a tree which strikes its roots into the ground while it throws up young branches towards the heavens. These two lines which go outward from the central personal point are to him clear, definite, and intelligible. He calls one good and the other evil
However the simplistic notion of going to heaven or hell is challenged. It is as hard to go to ‘hell’ as to enter the Gates of Gold. Even if one is determined to pursue self-destructive debauchery, one finds that one is checked by the divine light within oneself, the mental pain caused by one’s conscience.
But it is not so easy to go to hell as preachers declare it to be. It is as hard a task as to find one's way to the Golden Gate. A man may wreck himself utterly in sense-pleasure, — may debase his whole nature, as it seems, — yet he fails of becoming the perfect devil, for there is still the spark of divine light within him. He tries to choose the broad road which leads to destruction, and enters bravely on his headlong career. But very soon he is checked and startled by some unthought-of tendency in himself, — some of the many other radiations which go forth from his center of self.
Hence, if we acknowledge our divine nature we have to acknowledge that we are the cause of the pleasure and pain we experience, we are therefore responsible beings and should not rely on some outside divine power that creates blind fatalism.
It is because man is so idle, so indisposed to assume or accept responsibility, that he falls back upon this temporary makeshift of a creator. It is temporary indeed, for it can only last during the activity of the particular brain power which finds its place among us. When the man drops this mental life behind him, he of necessity leaves with it its magic lantern and the pleasant illusions he has conjured up by its aid. That must be a very uncomfortable moment, and must produce a sense of nakedness not to be approached by any other sensation. It would seem as well to save one's self this disagreeable experience by refusing to accept unreal phantasms as things of flesh and blood and power.
Not so, if man is regarded from a loftier standpoint than that we generally occupy. If he is looked upon as a powerful consciousness which forms its external manifestations according to its desires, then it is evident that physical pain results from deformity in those desires. No doubt it will appear to many minds that this conception of man is too gratuitous, and involves too large a mental leap into unknown places where proof is unobtainable. But if the mind is accustomed to look upon life from this standpoint, then very soon none other is acceptable; the threads of existence, which to the purely materialistic observer appear hopelessly entangled, become separated and straightened, so that a new intelligibleness illumines the universe.
Therefore pleasure and pain are the results of our experiencing the working out of our desires. As William Q Judge has observed,
The causes of reincarnation are desire and ignorance. We have what we term "will," but our will is moved into action by desire, and our acts spring from the desire to bring about pleasure or to avoid pain. As long as we are ignorant we constantly fix our desires upon enjoyment or the avoidance of pain, and thus lay the ground for the operation of Karma in another body. (The Necessity for Reincarnation)
Granting, then, for the sake of this argument, that man is a powerful consciousness who if his own creator, his own judge, and within whom lies all life in potentiality, even the ultimate goal, then let us consider why he causes himself to suffer.
If pain is the result of uneven development, of monstrous growths, of defective advance at different points, why does man not learn the lesson which this should teach him, and take pains to develop equally?
It would seem to me as if the answer to this question is that this is the very lesson which the human race is engaged in Learning.
Posted by Mark Casady at 15:31