The Spring season really ushered in a whole new phase as volatile Uranus in Aries shifted to Taurus, marking the end of a turbulent seven year passage.  Moreover, Chiron has moved into Aries, after a six-year stay in Pisces.:
Uranus enters Taurus (May 15th) (last in Taurus from 1935 – 1942). 1. Challenges and transformation of our values, including our self-value. 2. Radical innovations of our financial system on a personal and collective level.3. A shift from external ‘security’ props to internal security. 4. The breakdown of inauthentic false values in the collective. 5. A radical change in our understanding of beauty. 6. Innovations in taking care of the resources on our planet. 7. Major changes in the concept of ‘home’ and ‘housing’.8. Changes in our relationship patterns. (Cosmic Intelligence Agency)
Chiron in Aries (April 17th – June 2026): ( last in Aries from 1968-1977) understanding and integrating gaps in your sense of personal empowerment, engaging with your inner fears in a courageous manner, taking chances, in spite of your fear and healing energetic blocks that are connected to the planets that Chiron aspects in your chart during his travels through this sign. (Cosmic Intelligence Agency)
Morever, due to retrogradation, Saturn is still at the beginning of Capricorn:
Saturn in Capricorn:  conservation, restrictions, and boundaries to be put in place. […]- Saturn gives you what you deserve and no more. There will be no easy way or shortcuts up the career ladder as Saturn transits Capricorn. Only concentrated and steady progress will bring you the rewards that you deserve. (Café Astrology)
The more difficult aspects from the outer planets have faded, leaving three easy aspects, according to Café Astrology:
Jupiter trine Neptune: idealistic and humanitarian goals or impulses surface now. Making connections with others from a different background may figure. Widening our minds through unusual or different experiences can be part of the picture. Generosity and compassion increase and our faith is boosted. We more easily make personal sacrifices.
Saturn trine Uranus: This can be a time of firsts in the primary structures of our lives. Changes we make tend to be deliberate or calculated, but possibly also quite quick. Original ideas may take form, or they might be developed quite successfully now. There is an opportunity to combine stability and improvement or excitement with good results. The same can be said of innovation and tradition.


and the ever-present Neptune sextile Pluto. This is a whole new deal and although the spring quarter saw its share of turmoil, overall, the level of intensity and conflict seems to have mellowed.

Retro Cool Summer
At the solstice, four outer planets (Jupiter, Saturn, Neptune, Pluto) are retrograde and by the end of the summer, six planets will be retrograde; add Mars (June 26-August 27) and Mercury (July 26th-August 19). Retrograde motion can signify revisiting past experiences that are linked to the planets domain and also revealing elements pertaining to that planet’s energy that were not properly processed, causing a slowing of forward movement. It’s an ideal period for reviewing and fine tuning, and so after the brisk rush of the new spring energies, it’s a good time to slow down and evaluate how the new direction is going as well as dealing with loose ends and unfinished business from the previous turbulent periods. Here’s a quick breakdown, courtesy of Astrology King:
Jupiter retrograde (March 9- July 10) represents a time of philosophical or spiritual introspection and reflection. This year the main theme of Jupiter retrograde is poisoning of your personal value system and morals that affects your physical health.
Saturn retrograde(April 18-September 6) is a double dose of karma. The lessons associated with Saturn retrograde 2018 relate to your thoughts and words. Saturn retrograde 2018 will be especially challenging if you have a history of teasing or verbally abusing people. Gloomy thoughts, bad news or loneliness could have a negative effect on your mental well-being.
Neptune retrograde (June 18- November 25) is the ideal time for spiritual self-development. The grand trine aspects and fixed stars involved make Neptune retrograde 2018 especially good for undertaking a spiritual quest to seek the truth.
Pluto retrograde Pluto (April 22-October 2) this is ideal for taking a direct, even aggressive approach to dealing with your Pluto retrograde power and control issues. 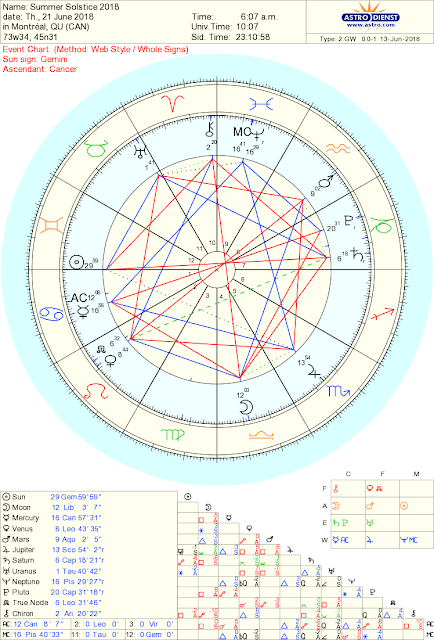 Mercury-Neptune-Jupiter water grand trine
A grand trine brings strong, stable, beneficial energy. This grand trine brings happy, warm, optimistic, idealistic feelings, with intuitive, creative thinking – good vibrations!
Inner planet pandemonium
Although the Moon is sextile to Venus and Trine to Mars making for an outgoing sociability, there are four heavy oppositions, and they actually form five T-squares, which are very difficult and powerful aspects. This could mean a day marked with a lot of minor tensions, conflicts, and mishaps. Perhaps this foreshadows the upcoming three summer eclipses, which should shakes things up. (a partial solar eclipse on July 13,  a total lunar eclipse on July 27–28, and a partial solar eclipse on August 11). Below is a brief look at the major oppositions:
Mercury opposite Pluto -  Intellectual conflict, resolving issues, introspection, one-track mind
Mars opposite Venus – Sexual tension (the Mars-Uranus square will  continue to add tension this summer, due to Mars retrograde)
Sun opposite Saturn – Restlessness, inhibition, isolation
On the more mystical side, the cross formed by the Sun/Pluto and Moon/Chiron oppositions is suggestive (although it is not quite a grand cross).
So there is a new sense of optimism and cooperation in the air, but the fallout from the sweeping changes of the previous period can still require considerable attention. The rebuilding process now slows down for the next four or five months as we progress in the vivacious early phase of a new direction. This can be a period akin to shaking the house to see if the new foundations are strong. Things will gradually pick up speed during the fall, more so when Jupiter enters its ruling sign of fiery Sagittarius  on November 8.
References:
Robert Hand, Planets in Transit
https://astrologyking.com/
https://cafeastrology.com/
http://foreverconscious.com/intuitive-astrology-retrograde-season-june-august-2018