In November 1889 Mahatma Gandhi visited the London Lodge of the Theosophical Society and met with Blavatsky and Annie Besant. Two members of the society also recommended that Gandhi read the Bhagavad Gita.  (Charles Freer Andrews (Hrsg.): Mahatma Gandhi, Mein Leben. Suhrkamp, Frankfurt a.M. 1983).  In an interview with the journalist Louis Fischer in June of 1946, Gandhi commented: “Theosophy is the teaching of Madame Blavatsky…Theosophy is the brotherhood of man.”  (Louis Fisher, The Life of Mahatma Gandhi, Harper and Row paperback edition, 1983, P. 437)

My mission is not merely brotherhood of Indian humanity. My mission is not merely freedom of India, though today it undoubtedly engrosses practically the whole of my life and the whole of my time. But through realization of freedom of India I hope to realize and carry on the mission of the brotherhood of man. My patriotism is not an exclusive thing. It is all-embracing and I should reject that patriotism which sought to mount upon the distress or the exploitation of other nationalities. The conception of my patriotism is nothing if it is not always, in every case without exception, consistent with the broadest good of humanity at large. Not only that, but my religion and my patriotism derived from my religion embrace all life. I want to realize brotherhood or identity not merely with the beings called human, but I want to realize identity with all life, even with such things as crawl upon earth. I want, if I don't give a shock, to realize identity with even the crawling things upon earth, because we claim descent from the same God, and that being so, all life in whatever form it appears must be essentially one. (The Mind of Mahatma Gandhi, 1945, 135) (Young India, 4-4-1929, p107) 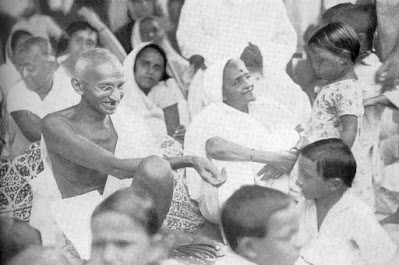 Interdependence is and ought to be as much the ideal of man as self-sufficiency. Man is a social being. Without inter-relation with society he cannot realize his oneness with the universe or suppress his egotism. His social interdependence enables him to test his faith and to prove himself on the touchstone of reality. If man were so placed or could so place himself as to be absolutely above all dependence on his fellow-beings he would become so proud and arrogant as to be a veritable burden and nuisance to the world. Dependence on society teaches him the lesson of humanity. That a man ought to be able to satisfy most of his essential needs himself is obvious; but it is no less obvious to me that when self-sufficiency is carried to the length of isolating oneself from society it almost amounts to sin. A man cannot become self-sufficient even in respect of all various operations from the growing of the cotton to the spinning of the yarn. He has at some stage or other to take the aid of members of his family. And if one may take the help from one's own family, why not from one's neighbours? Or otherwise what is the significance of the great saying, 'The world is my family'? (The Mind of Mahatma Gandhi, 1945, 136)

Unity, to be real, must stand the severest strain without breaking. “Communal Unity” (1949).

Islam stands for the unity and brotherhood of mankind, and not for disrupting the oneness of the human family. “Communal Unity” (1949).

Hinduism insists on the brotherhood of not only all mankind but of all that lives.  “All Religions are True” (1962).

All the great religions of the world inculcate equality and brotherhood of mankind and the virtue of toleration.  “All Religions are True” (1962)

Through realization of freedom of India, I hope to realize and carry on the mission of brotherhood of man.  Judith M. Brown (2008). “The Essential Writings”, p.19, Oxford University Press 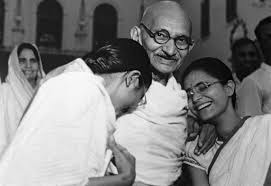 The golden way is to be friends with the world and to regard the whole human family as one. He who distinguishes between the votaries of one's own religion and those of another miss-educates the members of his own and opens the way for discord and irreligion. (Mahatma Gandhi, The Last Phase, 1956, I, 359)

I have that implicit faith in my mission that, if it succeeds - as it will succeed, it is bound to succeed--history will record it as a movement designed to knit all people in the world together, not as hostile to one another but as parts of one whole. (Harijan, 26-1-1934, p. 8)

Mankind is one, seeing that all are equally subject to the moral law. All men are equal in God's eyes. There are, of course, differences of race and status and the like, but the higher the status of a man, the greater is his responsibility. (The Mind of Mahatma Gandhi, 1945, 137)

I am a humble servant of India and in trying to serve India, I serve humanity at large.... After nearly fifty years of public life, I am able to say today that my faith in the doctrine that the service of one's nation is not inconsistent with the service of the world has grown. It is a good doctrine. Its acceptance alone will ease the situation in the world and stop the mutual jealousies between nations inhabiting this globe of ours. (The Mind of Mahatma Gandhi, 1945, 135-36)