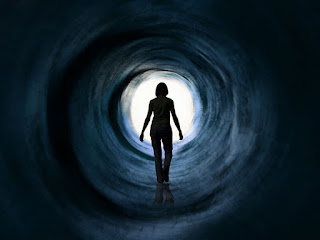 Selections from The transpersonal model of death as presented in Madame Blavatsky's Theosophy by Dr Jean-Louis Siémons Pp -9-20 http://www.blavatsky.net/index.php/near-death-experiences/36-topics/reincarnation/near-death-exp/62-what-is-death
The Ego's quasi omniscience is a key to interpret the dying man's conscious experience in its higher phase.

Precisely, in the process of dying, all the necessary conditions are met for this amazing power of omniscience to be displayed in various ways.
Essentially, it is manifest in the following items:
The objective, panoramic review of life.
Now, even though this sudden reminiscence of life at the "last" moment was known in H.P. Blavatsky's time, her brief analysis of it reveals an unquestionable experimental knowledge of this strange experience. Comparisons with modern NDE accounts may be made, as follows:
"He reads his life [...] as a spectator... .
There was a certain detachment as I watched all this. I had the sensation  that I was on the outside looking in and it seemed that this reoccurence  [sic] of my life was taking place in front of me and I was viewing it.   [fn: 52 R. Noyes & R. Kletti, "Panoramic Memory  a Response to the Threat of Death".]
[...] I saw my whole past life take place in many images, as though  on a stage as some distance from me. [fn: 53 A. Heim, "Notizen  über den Tod durch Absturz".]
"[...] as a spectator looking down into the arena he is quitting".
I acted out my life, as though I were an actor on a stage upon which  I looked down from practically the highest gallery in the theatre. Both  hero and onlooker, I was as though doubled". [fn 54: Extract  from a letter of Albert Heim to Oskar Pfister (quoted by Carol Zaleski,   Otherworld Journeys, p 130]
Obviously, this historical reminiscence must be particularly rich with respect to the years of childhood since
Memory, as we all know, is strongest with regard to its early associations,  then when the future man is only a child, and more of a soul than of a  body. [fn: 55 H.P.B., "Memory in the Dying".]
Actually, those pictures of early life are often quite detailed and vivid in NDE accounts:
[...] the underside of a table seen from all fours, the smell of  a pudding, the pinch of elastic on a Halloween mask; the distance from  foot to bicycle training pedal the contents of a school gym locker - all  spill forth with every sensory detail and accompanying emotion reawakened.   [fn: 56 C. Zaleski, Otherworld Journeys, p.128.]


To come back to our comparison:
"He sees and now understands himself as he is, unadorned by  flattery or self-deception."
It was like I got to see some good things I had done and some mistakes  I had made, you know, and try to understand them. [fn: 57   K. Ring. Life at Death, p.73.]
Some people characterize this as an educational effort on the part  of the being of light. [fn: 58 R. Moody, Life after Life,  p.65.]
The being would ask something like, [...] "What have  you done with your life to show me?" What was expected in return was   [...] a general self-scrutiny, putting one's whole life in question.   [fn 59:C. Zaleski, Otherworld Journeys, p.128.]
"But this instant is enough to show him the whole chain of causes  which have been at work during his life".
It was like: "Okay, here's why you had the accident. Here’s why this happened. Because so and so and so." ... it all had meaning.  Definitely. [fn 60: K. Ring, Life at Death, p.73.]
The revelation of the human being's responsibility in the minutest details of his existence, recognized at his last moment, is strikingly brought to light in the following account of an experiencer, reliving her life as Phyllis:
The reliving included not only the deeds committed by Phyllis since  her birth [...] but also a reliving of every thought ever thought  and every word ever spoken PLUS the effect of every thought, word and deed  upon everyone and anyone  who had ever come within her sphere of influence, whether she actually  knew them or not PLUS the effect of her every thought, word and deed upon  the weather, the air, the soil, plants and animals, the water, everything  else within the creation we call Earth and the space Phyllis once occupied.   [...] I never before realized that we were responsible and accountable  for EVERY SINGLE THING WE DID. That was overwhelming!   [fn 62:P.M.H. Atwater, I died Three Times in 1977.   Quoted by C. Zaleski(Otherworld Journeys, p. 131)] 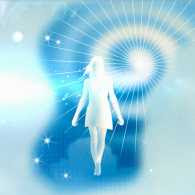 The experience of "total knowledge".
The theosophical model of death perfectly accounts for this extraordinary flash of enlightenment "in which the subject seemed to have complete knowledge".
In Moody's words:
Several people have told me that during their encounters with "death  they got brief glimpses of an entire separate realm of existence in which  all knowledge - whether of past, present, or future - seemed to co-exist  in a sort of timeless state. [...] The experience has been compared,  in various accounts to a flash of universal insight. [fn 65: R.  Moody, Reflections on Life after Life, pp.10-11.]
One woman reported:
This seems to have taken place after I had seen my life pass before  me. It seemed that all of a sudden, all knowledge - of all that had started  from the very beginning, that would go on without end - that for a second  I knew all the secrets of all ages, all the meaning of the universe, the  stars, the moon - of everything. [fn 66: Ibid. p 11]
Another informant confirmed:
[...] there followed a panoramic vision, impossible to describe,  showing everything "from the beginning of time to the end of time".   [fn 67: K. Ring, Heading toward Omega, p.199.]
An interesting point made by one of Ring's respondents concerning this state of total knowledge was that he did not acquire it at the moment: "he remembered it [..] he was, in effect, all knowledge". [fn 6: Ibid p. 199] This really denotes a rare peak experience in which all sense of dualism seems to vanish, the personal consciousness being, for a flashing moment, in complete union with the Egoic consciousness, merged in the light of the HIGHER SELF (the One root of all conscious beings) "which alone is [permanently] and completely omniscient." [fn 69: H.P.B., The Key to Theosophy, p.132. The individual Ego is said to be potentially omniscient, and to manifest a quasi omniscience when the conditions permit; it becomes de facto omniscient, exclusively in nirvana, when merged in the Universal Soul (Key, p.133). During one lifetime, when it "meditates" its personality, from its own level (beyond space and time), it is practically omniscient as regards its own earth-related evolution.]
In the case of NDE's, however,
[...] all agree that this feeling of complete knowledge did not persist  after their return; that they did not bring back any sort of omniscience.   [fn 71: R. Moody, Reflections on Life after Life, p.10.]
This is not surprising, because, according to Theosophy, the memory of such exceptional visions cannot be impressed upon the physical brain - except through a special training in the line of spiritual yoga.
"Supernatural rescues
The preceding explanations are still valid in cases when people are rescued from a fatal danger by a providential help, in the form of an inner light guiding them to the only safe exit from a dark place, or of a voice calling out their name to stop them in the fog on the edge of a cliff, or commanding to move in the only possible direction of escape. [fn 74:Cf. R. Moody, Reflections on Life after Life, pp.23-28.]
In the theosophical view, these are in no way cases of supernatural interposition of God, or Christ, but (rare) examples of situations in which the Ego has the opportunity to take command over its personality in a moment of great emergency, when the latter loses all control (or even is unaware of its impending death).
Then, it happens that the human automaton executes, with an incredible precision, the only movements or gestures that could draw the man safe and sound out of the jaws of death. 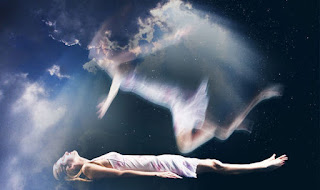 The apparent choice to come back.
Many informants have declared that they unwillingly reintegrated their bodies, so complete was the bliss they were merged in. Other ones insisted that a kind of choice was left to them, either to trespass the border of life, or to return in order to fulfill an earthly mission. They were "authorized", they felt, not to die, as a result of their will to come back.
It is easy to argue that their hour had not yet come: resuscitated beyond their control, they could later on invent moral reasons, attributing their return to a generous decision on their part. This argument, however, may not dovetail with all facts. [fn 75: There is an interesting example in R. Moody's Life after Life (pp. 101-107): during a kind of OBE, a patient was first warned of his impending death by the being of light. Accepting his fate at first, with serenity, the man became worried, the day before his appointed end in a surgical operation, because great troubles were in store for his wife, on account of an adopted nephew. He wrote some instructions to his wife and ... broke out in tears. At that moment again, the "presence" made itself felt, imprinting these thoughts in the patient's mind: "Jack, why are you crying? [...] since you are asking for someone else and thinking of others - not Jack - I will grant you, what you want. You will live until you see your nephew become a man".]
With Theosophy, one cannot overlook the possibility of a surge of will at the last moment, with the effect of displacing an equilibrium of opposite forces in the sense of restoring life, as long as there remains a chance for such a return.
After all, the panoramic vision of existence, bringing to a vivid light all the links with other people - and particularly the loved ones - may well generate in the dying person an all-powerful desire to come back to those loved ones, for a real service of them. This essentially altruistic motive, which is in perfect harmony with the higher Ego's deep nature, could be strong enough, at the critical instant, to force a resuscitation process, with the help of the Ego, at unison with its terrestrial personality's aspiration.
Postulating as it does free-will in every man, Theosophy would not refuse it a last opportunity to change the line of a destiny.