Selections from The transpersonal model of death as presented in Madame Blavatsky's Theosophy by Dr Jean-Louis Siémons Pp -9-20 http://www.blavatsky.net/index.php/near-death-experiences/36-topics/reincarnation/near-death-exp/62-what-is-death 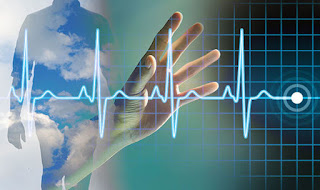 The journey to death is a mapped out itinerary.
Clearly, dying is not a haphazard adventure. This subjective journey, "through the avenue of psychic and last of all of spiritual consciousness", follows a definite programme, an itinerary ascending through a complete scale of levels of experience, that have been known and classified for a long time by certain Oriental schools to which Mme Blavatsky referred.
For instance, when the dying man feels "up there in space", out of his body, he is just setting foot, so to say, on the lower rung of "astral" consciousness. This level, Mme Blavatsky explained, "corresponds in everything to the terrestrial objective" (consciousness) - a fact duly acknowledged by NDE'ers who often reported seeing at this moment all the details of the surroundings, only from a different vantage point.
In most cases, it is from this (lower astral) level that NDE'ers leave all conscious connection with the physical environment, to enter the darkness of a kind of "tunnel" (or black space), through which they feel they are moving, more or less rapidly, to reach a world of Light.
In some cases too, experiencers have recounted a sequence of experiences, from hellish to paradisaical, (always in the same order, from bad to good): this strongly suggests that they consciously tasted something of the intermediary levels before reaching the glorious summit of the scale.] normally skip over when they ascend to the inner Light.
With Theosophy, there is good reason to believe that the personality enjoys a natural protection from its higher Alter Ego, at the moment of death.
Curiously, a similar explanation has been arrived at by various modern authors. Thus, in an interpretation of unpleasant NDE's, Kenneth Ring states:
Why is this domain so rarely reported compared to the paradisaical  realm? One proposal has it that the tunnel phenomenon serves as a shield  to protect the individual from an awareness of this domain. It will be  recalled that the tunnel effect itself was interpreted as representing  a shift in consciousness from one level to another. Functionally, this  state of affairs can be compared to a traveller riding a subway underneath  the slums of a city: the subway tunnel prevents him ever being directly  aware of his surroundings although the slums are there. Instead, like the  typical near-death survivor, he begins his trip in darkness and emerges  into the light.[fn 29: K. Ring, Life at Death,  p.249. With theosophical teachings in hand, I suggested the same kind of  explanation in Mourir pour Renaître, p.128.]
This passage gives an excellent image of the situation, from the theosophical viewpoint.
Now, according to Mme Blavatsky, the sixth division of the astral consciousness
[...] is the plane from which come all beautiful inspirations of  art, poetry and music; high types of dreams, flashes of genius. Here we  have glimpses of past incarnations [...]. (The Secret Doctrine, Volume 3 (1897), ‘’Divisions of the astral plane’’ pp. 553-554)
Finally, at the very top,
WE ARE ON THE SEVENTH PLANE AT THE MOMENT OF DEATH OR  IN EXCEPTIONAL VISIONS. THE DROWNING MAN IS HERE WHEN  HE REMEMBERS HIS PAST LIFE.
In this perspective, the core experience at death cannot be attributed to an altered state of consciousness - of the delirium or hallucination-type. Unambiguously, it is a state of super-consciousness of perfect lucidity.
According to one of H.P. Blavatsky's masters:
No man dies insane or unconscious, [fn 31: This is also  the conclusion of some modern authors, like Dr E. Kübler-Ross. See  E. Kemf: E. Kübler-Ross: "There is No Death.]   as some physiologist assert. Even a madman or one in a fit of   delirium tremens will have his instant of perfect lucidity at the  moment of death, though unable to say so to those present. [fn 32:  Extract from a master's letter to A.P. Sinnett, dated Oct. 1882, Mahatma  Letters, p.170.]
Thus, even if a man, in his last agony, is caught up in the horrible nightmares of the intermediary levels, his personal consciousness ultimately finds access to the complete bliss of the upper stage - "the last ecstasis of death".
The last moment is lived in a communion between the personal and the transpersonal. 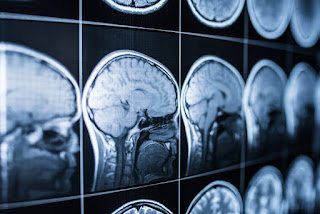 In the XIXth century, Theosophy emphasized the importance of the panoramic review of life, as a central feature in the process of dying. The following passages insist on the fully detailed, all-comprehensive and extremely rapid character of the vision (in accordance, with many modern NDE accounts):
At the solemn moment of death every man, even when death is sudden,  sees the whole of his past life marshalled before him, in its minutest  details [fn 35: H.P.B., The Key to Theosophy, p.162.]
In brief,
A long life, perhaps, lived over again in the space of one short  second! [fn 36: H.P.B., "Memory in the Dying".]
This review, in perfect lucidity, takes place (as seen before) when the personal consciousness has reached the highest level open to it on the ascending scale. Then, at that level,
For one short instant the personal becomes one with the individual  and all-knowing Ego[fn 37: H.P.B., The Key, p.162.] 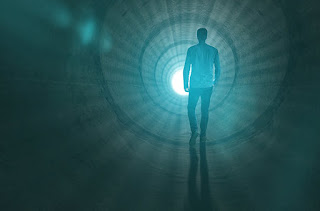 "Entering the Light", or "encountering the being of light" - an imaged interpretation by the personal self of its re-union with its deep-rooted source of self-consciousness.
No wonder that NDE'ers should feel unable to describe their experience in usual terms of daily life language.
In Moody's words,
It has a very definite personality. The love and the warmth which  emanate from this being to the dying person are utterly beyond words, and  he feels completely surrounded by it and taken up in it, completely at  ease and accepted in the presence of this being. He senses an irresistible magnetic attraction to this light. He is  ineluctably drawn to it [fn 43:R. Moody, Life after  Life, p.59.]
Quite often, in their efforts of description, experiencers use different labels to identify this "presence - God, Christ, Angel, Guide, or what not. Obviously, in their complete ignorance of deep (spiritual) psychology, they could hardly find better terms to translate, in an intelligible mode, this unexpected encounter with their own individual Ego-Self, which seems to "know all about them", to bear them "a total love and acceptance" and to have with them a kind of intimate, "personal" exchange. For very good reasons indeed - in the light of Theosophy - if we remember that this Ego is not a stranger to its terrestrial personality, but remains closely "interested" in its destiny: from birth to death, the transpersonal individuality broods over (or "meditates") its earthly representative (or emanation), registering the latter's behaviour and inspiring it with its own knowledge and energy, through the unspoken language of intuition, dreams, etc.
Interestingly, this theosophical interpretation finds definite echoes in near-death literature. Thus, with Kenneth Ring, we have these pertinent remarks:
Moody spoke of a "being of light" and though none of our  respondents used this phrase some seemed to be aware of a "presence"  (or "voice") in association with the light[...]. Here  we must, I think, make a speculative leap. I submit that this presence  voice is actually - oneself! It is not merely a projection of one's personality,  however, but one's total self; or what in some traditions is called the  higher self. In this view, the individual personality is but a split-off  fragment of the total self with which it is reunited at the point of death.  During ordinary life, the individual personality functions in a seemingly  autonomous way, as though it were a separate entity. In fact, however,  it is invisibly tied to the larger self structure of which it is apart".   [fn 44:K. Ring. Life at Death, p.240.]
Equally relevant is the following speculation preferred by Kenneth Ring:
What has this to do with the light? The answer is - or so I would  say - that this higher self is so awesome, so overwhelming, so loving,  and unconditionally accepting (like an all-forgiving mother) and so foreign  to one's individualized consciousness that one perceives it as separate  from oneself as unmistakably other. It manifests itself as a brilliant  golden light, but it is actually oneself, in a higher form, that one is  seeing". [fn 46:Ibid. p 240]
To conclude, again in Ring's words - perfectly in line with Theosophy:
The golden light is actually a reflection of one's own inherent divine  nature and symbolizes the higher self. [fn: 47 Ibid.  pp.240-241. In this passage, the term reflection is quite correct.  At this stage, this golden light perceived by the dying man is only a very  limited effect, on the psychic sphere, of the glorious radiance of the  divine universal SELF hidden in the hearts of all  creatures, according to the Upanishads.]
The fact that some persons believe that they had "a conversation with God" makes no difference in this context:
Since most people are used to thinking dualistically of God as somehow  "up there" while they remain "down here" they can be  expected to interpret their experience with their higher self as a direct  encounter with God. The idea of "God" is after all; more familiar  to most people than is the notion of a higher self. [fn: 48  Ibid. p. 241.]