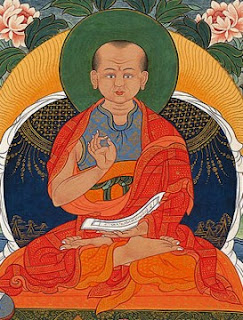 One of Tibetan Buddhism’s most original practices aimed at developing empathy, altruism, compassion and equanimity is known as lojong, or mind training. It’s simple and practical bodhicitta nature has made it a popular teaching among students in Western cultures.

Lojong mind training practice was developed over a 300-year period between 900 and 1200 CE, as part of the Mahāyāna school of Buddhism. Atiśa (982–1054 CE), a Bengali meditation master, is generally regarded as the originator of the practice. The fundamental work is a set of 59 aphorisms formulated in Tibet in the 12th century by Chekawa Yeshe Dorje entitled the "7 Points of Lojong".

The Eight Verses for Training the Mind is one of the most important texts from the lojong canon, written by Geshe Langri Tangpa (1054–1123), an important figure in the lineage of the Kadampa and Gelug schools of Tibetan Buddhism and disciple of Potowa Rinchen Sal. His Holiness the Dalai Lama refers to this work as one of the main sources of his own inspiration and includes it in his daily meditations.


1.       By thinking of all sentient beings
As more precious than a wish-fulfilling jewel
For accomplishing the highest aim,
I will always hold them dear.

2.      Whenever I’m in the company of others,
I will regard myself as the lowest among all,
And from the depths of my heart
Cherish others as supreme.


3.      In my every action, I will watch my mind,
And the moment destructive emotions arise,
I will confront them strongly and avert them,
Since they will hurt both me and others.


4.      Whenever I see ill-natured beings,
Or those overwhelmed by heavy misdeeds or suffering,
I will cherish them as something rare,
As though I’d found a priceless treasure.


5.      Whenever someone out of envy
Does me wrong by attacking or belittling me,
I will take defeat upon myself,
And give the victory to others.


6.      Even when someone I have helped,
Or in whom I have placed great hopes
Mistreats me very unjustly,
I will view that person as a true spiritual teacher.


7.      In brief, directly or indirectly,
I will offer help and happiness to all my mothers,*
And secretly take upon myself
All their hurt and suffering.

8.     I will learn to keep all these practices
Untainted by thoughts of the eight worldly concerns.
May I recognize all things as like illusions,
And, without attachment, gain freedom from bondage.

*The term mother is based on the notion that since all sentient beings have been through the reincarnation process countless times, everyone has effectively been the mother of everyone else, and so should regard each other accordingly.
Posted by Mark Casady at 11:55