Blavatsky and the Kalama Sutta 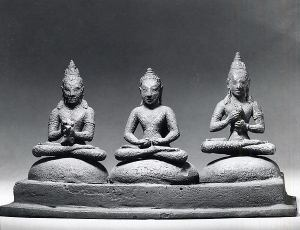 In Isis Unveiled Vol.2, p. 559, Blavatsky quotes a well-known passage from the Kalama Sutta, which she got from Henry Alabaster’s Wheel of the Law (1871), pp. 35-36, who is referencing Chao Phya Thipakon, a Siamese foreign affairs minister from 1856-1869, who wrote a book on Buddhism entitled ‘Kitchanukit’. She later quoted it from Henry Olcott’s Buddhist Catechism (See Collected Writings vol. 14, p. 417), both use it to suggest that there are no dogmas in Buddhism that are required to be believed on faith:
"Do not believe in anything because it is rumored and spoken of by many," says Buddha; "do not think that is a proof of its truth.
"Do not believe merely because the written statement of some old sage is produced; do not be sure that the writing has ever been revised by the said sage, or can be relied on. Do not believe in what you have fancied, thinking that, because an idea is extraordinary, it must have been implanted by a Deva, or some wonderful being.
"Do not believe in guesses, that is, assuming something at hap-hazard as a starting-point, and then drawing conclusions from it — reckoning your two and your three and your four before you have fixed your number one.
"Do not believe merely on the authority of your teachers and masters, or believe and practice merely because they believe and practice.
"I [Buddha] tell you all, you must of yourselves know that this is evil, this is punishable, this is censured by wise men; belief in this will bring no advantage to any one, but will cause sorrow; and when you know this, then eschew it."*
The Kalama Sutra is a sutra in the Anguttara Nikaya of the Tipitaka. It is often cited by Mahayana and Theravada Buddhists and is known as the Buddha's charter of free inquiry, free of fanaticism, bigotry, dogmatism, and intolerance. Below is a more recent translation:
Do not go upon what has been acquired by repeated hearing; nor upon tradition; nor upon rumor; nor upon what is in a scripture; nor upon surmise; nor upon an axiom; nor upon specious reasoning; nor upon a bias towards a notion that has been pondered over; nor upon another's seeming ability; nor upon the consideration, 'The monk is our teacher.' Kalamas, when you yourselves know: 'These things are bad; these things are blamable; these things are censured by the wise; undertaken and observed, these things lead to harm and ill,' abandon them.
Kalama Sutta, Anguttara Nikaya, Tika Nipata, Mahavagga, Sutta No. 65, Verse 4
Translated from the Pali by Ven. Soma Thera
https://www.accesstoinsight.org/tipitaka/an/an03/an03.065.soma.html
Posted by Mark Casady at 10:06