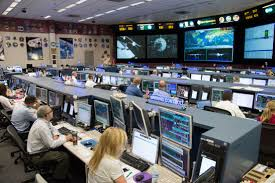 All Systems Go
Two days before a full moon in emotional Pisces, this is a clean, intense chart where all planets are tightly interconnected with multiple aspects and most of the aspects have progressively gone exact over the previous two weeks. After an intensely retrograde summer punctuated by three powerful eclipses, the haze is slowly lifting as a more forward looking energy falls into place, especially when Pluto stations direct on September 30, leaving just two planets, Uranus and Neptune, in retrograde motion. Since the Pluto-Uranus square will be reactivated in the winter, this quarter looks like one of the easiest in a long time. Overall, it is quite an upbeat chart with three minor grand trines closely overlapping within the space of a single hemisphere. There are two closely situated T-squares, but Mars, which has recently entered individualistic Aquarius, has two easy aspects that connect them with a stabilizing influence.

The Spirit Hovers Over the Waters
Pluto-Neptune-Jupiter minor grand trine – This gives an idealistic, practical, creative energy, conducive to solving problems in an original and productive manner. Spiritual transformation is favorized.

Some Like it Hot
Mars- Uranus – Venus T-square. This T-square is about impulsive, unusual passions and attractions that probably are not as good as they seemed at first. This could have an addictive, obsessive nature. Due to a Mars retrograde in the Summer, the Mars-Uranus square has been in effect for almost three times as long as usual and it can be quite a volatile aspect that brings about unexpected difficulties. 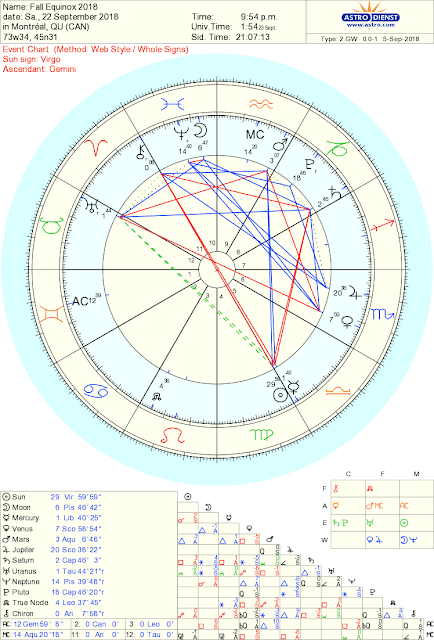 Arrested Development
Saturn – Sun/Mercury – Chiron T-square. Due to Chiron and Saturn retrogrades, the Sun-Saturn-Chiron solsticial and equinoctial synchronicity is still in effect for one last time as Saturn moves away from the Winter solsticial point. One more opportunity to heal old wounds, past developmental traumas in order to gain a more confident personality. Mercury has just entered fair, open Libra. Sun conjunct Mercury gives clear, dynamic thinking while Mars trine Chiron and sextile Sun/Mercury should help stabilize this sensitive T-square configuration and alleviate the internalized anger and frustration that can lead to depression. This is the tightest configuration on the chart, all aspects being within three degrees.

Earlier in the year, the more radical, revolutionary energies that marked the last few years finely gave way to less conflicted ones, with new directions opening up; but the summer time may have been a time to let the dust settle. The fall quarter, and the rest of the calendar year seems an exceptional period for productive work in new directions which should intensify when Jupiter moves into Sagittarius in November. Although the revolutionary Uranus-Pluto square reappears in the Winter, overall, this could be seen as a beneficial, easy period before things intensify in a big way by 2020.