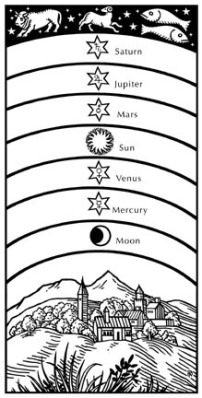 Chapter 9 of Isis Unveiled 2, is full of interesting information on the number seven, so a second post on the topic seemed pertinent:
Read the hymn by Dirghatamas.
"TO HIM WHO REPRESENTS ALL THE GODS."
"The God here present, our blessed patron, our sacrificer, has a brother who spreads himself in mid-air. There exists a third Brother whom we sprinkle with our libations. . . . It is he whom I have seen master of men and armed with seven rays."**
And again:
"Seven Bridles aid in guiding a car which has but ONE wheel, and which is drawn by a single horse that shines with seven rays. The wheel has three limbs, an immortal wheel, never-wearying, whence hang all the worlds."
"Sometimes seven horses drag a car of seven wheels, and seven personages mount it, accompanied by seven fecund nymphs of the water."(411)
With every ancient people, the Creator, or Demiurge, was placed over the seventh heaven. "And were I to touch upon the initiation into our sacred Mysteries," says Emperor Julian, the kabalist, "which the Chaldean bacchised respecting the seven-rayed God, lifting up the souls through Him, I should say things unknown, and very unknown to the rabble, but well known to the blessed Theurgists."( Julian: "In Matrem," p. 173; Julian: "Oratio," v., 172.) In Lydus it is said that "The Chaldeans call the God IAO, and SABAOTH he is often called, as He who is over the seven orbits (heavens, or spheres), that is the Demiurge."( Lyd.: "De Mensibus," iv., 38-74; "Movers," p. 550; Dunlap: "Saba," p. 3.)
One must consult the Pythagoreans and Kabalists to learn the potentiality of this number. Exoterically the seven rays of the solar spectrum are represented concretely in the seven-rayed god Heptaktis. These seven rays epitomized into THREE primary rays, namely, the red, blue, and yellow, form the solar trinity, and typify respectively spirit-matter and spirit-essence. Science has also reduced of late the seven rays to three primary ones, thus corroborating the scientific conception of the ancients of at least one of the visible manifestations of the invisible deity, and the seven divided into a quaternary and a trinity.
The Pythagoreans called the number seven the vehicle of life, as it contained body and soul. They explained it by saying, that the human body consisted of four principal elements, and that the soul is triple, comprising reason, passion, and desire. The ineffable WORD was considered the Seventh and highest of all, for there are six minor substitutes, each belonging to a degree of initiation. The Jews borrowed their Sabbath from the ancients, who called it Saturn's day and deemed it unlucky, and not the latter from the Israelites when Christianized. The people of India, Arabia, Syria, and Egypt observed weeks of seven days; and the Romans learned the hebdomadal method from these foreign countries when they became subject to the Empire. Still it was not until the fourth century that the Roman kalends, nones, and ides were abandoned, and weeks substituted in their place; and the astronomical names of the days, such as dies Solis (day of the Sun), dies Lunae (day of the Moon), dies Martis (day of Mars); dies Mercurii (day of Mercury), dies Jovis (day of Jupiter), dies Veneris (day of Venus), and dies Saturni (day of Saturn), prove that it was not from the Jews that the week of seven days was adopted. Before we examine this number kabalistically, we propose to analyse it from the standpoint of the Judaico-Christian Sabbath. (417-418)
When Moses instituted the yom shaba, or Shebang (Shabbath), the allegory of the Lord God resting from his work of creation on the seventh day was but a cloak, or, as the Sohar expresses it, a screen, to hide the true meaning.

The Jews reckoned then, as they do now, their days by number, as, day the first; day the second; and so on; yom ahad; yom sheni; yom shelisho; yom rebis; yom shamishi; yom shishehi; Yom SHABA.
"The Hebrew seven , consisting of three letters, S. B. O., has more than one meaning. First of all, it means age or cycle, Shab-ang; Sabbath can be translated old age, as well as rest, and in the old Coptic, Sabe means wisdom, learning. Modern archaeologists have found that as in Hebrew Sab also means gray-headed, and that therefore the Saba-day was the day on which the "gray-headed men, or 'aged fathers' of a tribe, were in the habit of assembling for councils or sacrifices."( "Westminster Review": Septenary Institutions; "Stone Him to Death." )

"Thus, the week of six days and the seventh, the Saba or Sapta-day period, is of the highest antiquity. The observance of the lunar festivals in India, shows that that nation held hebdomadal meetings as well. With every new quarter the moon brings changes in the atmosphere, hence certain changes are also produced throughout the whole of our universe, of which the meteorological ones are the most insignificant. On this day of the seventh and most powerful of the prismatic days, the adepts of the "Secret Science" meet as they met thousands of years ago, to become the agents of the occult powers of nature (emanations of the working God), and commune with the invisible worlds. It is in this observance of the seventh day by the old sages — not as the resting day of the Deity, but because they had penetrated into its occult power, that lies the profound veneration of all the heathen philosophers for the number seven which they term the "venerable," the sacred number. The Pythagorean Tetraktis, revered by the Platonists, was the square placed below the triangle; the latter, or the Trinity embodying the invisible Monad — the unity, and deemed too sacred to be pronounced except within the walls of a Sanctuary. (417-418)
The Heptaktis is not the Supreme Cause, but simply an emanation from Him — the first visible manifestation of the Unrevealed Power. "His Divine Breath, which, violently breaking forth, condensed itself, shining with radiance until it evolved into Light, and so became cognizant to external sense," says John Reuchlin. ( "Di Verbo Mirifico.") This is the emanation of the Highest, the Demiurge, a multiplicity in a unity, theElohim, whom we see creating our world, or rather fashioning it, in six days, and resting on the seventh. And who are these Elohim but the euhemerized powers of nature, the faithful manifested servants, the laws of Him who is immutable law and harmony Himself?
They remain over the seventh heaven (or spiritual world), for it is they who, according to the kabalists, formed in succession the six material worlds, or rather, attempts at worlds, that preceded our own, which, they say, is the seventh. If, in laying aside the metaphysico-spiritual conception, we give our attention but to the religio-scientific problem of creation in "six days," over which our best biblical scholars have vainly pondered so long, we might, perchance, be on the way to the true idea underlying the allegory. The ancients were philosophers, consistent in all things. Hence, they taught that each of these departed worlds, having performed its physical evolution, and reached — through birth, growth, maturity, old age, and death — the end of its cycle, had returned to its primitive subjective form of a spiritual earth. Thereafter it had to serve through all eternity as the dwelling of those who had lived on it as men, and even animals, but were now spirits. This idea, were it even as incapable of exact demonstration as that of our theologians relating to Paradise, is, at least, a trifle more philosophical. (419-420)
The Chaldeo-Babylonian tablets recently translated by George Smith leave no doubt of that in the minds of those who read the inscriptions esoterically. Ishtar, the great goddess, speaks in column iii. of the destruction of the sixth world and the appearance of the seventh, thus:
"Six days and nights the wind, deluge, and storm overwhelmed.
"On the seventh day, in its course was calmed the storm, and all the deluge,
"which had destroyed like an earthquake,*
"quieted. The sea he caused to dry, and the wind and deluge ended. . . .
"I perceived the shore at the boundary of the sea. . . .
"to the country of Nizir went the ship (argha, or the moon).
"the mountain of Nizir stopped the ship. . . .
"the first day, and the second day, the mountain of Nizir the same.
"the fifth and the sixth, the mountain of Nizir the same.
"on the seventh day, in the course of it
"I sent forth a dove, and it left. The dove went and turned, and . . . the raven went . . . and did not return.
"I built an altar on the peak of the mountain.
"by seven herbs I cut, at the bottom of them I placed reeds, pines, and simgar. . . .
"the gods like flies over the sacrifice gathered.
"from of old also the great God in his course.
(422-23)
Posted by Mark Casady at 15:21