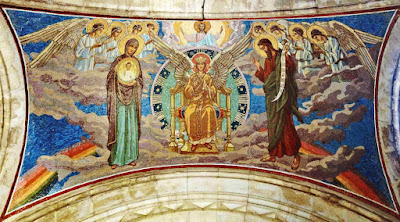 The Name, which is no name, but a Sound or rather Motion. The mystery of the Logos, Verbum and Vâch has ever been concealed in the mystery of Names. These Names, in whatever tongue, or among whatever people, all represent permutations of the “Ineffable Name.”In this connection, the following passage from the Pistis-Sophia (page 378, 379) is of great interest. Jesus, in explaining the Mystery of the Light of his Father, the Baptisms of Smoke and of the Spirit of the Holy Light, and the Spiritual Anointing, to his Disciples, continues:


“Nothing, then, is more excellent than these Mysteries, into which ye inquire, unless it be the Mystery of the Seven Voices, and their Nine-and-forty Powers and Numberings (ps‘phôn), nor is any name more excellent than all of them, the Name, in which are all Names, and all Lights and all Powers. He therefore, who shall depart out of the Body of Hyle (Note: not necessarily at death only, but during Samâdhi, or mystic trance) knowing that Name, no Smoke (Note: i.e. no theological delusion) nor Authority, nor Ruler of the Sphere of Fate, nor Angel, nor Archangel, nor Power, shall be able to prevent that Soul; nay, if on quitting the World, a man shall speak that Name to the Fire, it shall be extinguished, and the Mist shall withdraw. And if he shall speak it to the Daemons and the Receivers of the Outer Mist (Darkness), and to its Rulers, Authorities, and Powers, all shall perish, so that their Flame is consumed, and they cry out, ‘Thou art hallowed, the sanctified one, thou blessed one, of all them who are holy.’ And if they shall speak that Name to the Receivers of Evil Condemnation, and their Authorities and all their powers, and also to Barbelo and the Invisible Deity, and the Three Triple-Powers, forthwith all will collapse in those regions, so that they shall be compelled to dissolve and perish, and cry out: ‘O Light of every Light, which is in the infinite Light, remember us also, and cleanse us’.”
With regard to this passage, it is remarked in The Secret Doctrine, II, 570: “It is easy to see who this Light and Name are: the light of Initiation and the name of the ‘Fire Self,’ which is no name, no action, but a Spiritual, ever-living Power, higher even than the ‘Invisible God, as this Power is ITSELF. (Blavatsky, Collected Writings, vol. 13, pp. 42)
The 13 Repentences of Pistis Sophia


With page 181 of the Codex [Schwartze’s transcription], we come to the conclusion of the incident of the repentant Sophia. The 139 pages which deal with the subject demand the closest attention of the student of Esotericism, for not only have we here a history of the “pilgrimage” of the Soul, but also a description of the degrees of Initiation which correspond both to the natural degrees or states of consciousness, and to the cycles of human evolution. We will now endeavour to review this Pilgrimage of PISTIS-SOPHIA, following the path of her “transgression” or desire for Light, through her 13 Repentances, or Changes of Mind (Metanoiae, changes of the Nous or Manas), until her restoration to the Thirteenth Aeon, her proper region or plane.
To attain to the knowledge of Light, or the Logos, the soul has to descend into Matter or Hyle. Hence PISTIS-SOPHIA, desiring the Light, descends towards its Reflection from the Thirteenth Aeon, through the Twelve Aeons, into the depths of Chaos, where she is in danger of entirely losing her own innate Light or Spirit, of which she is continually deprived by the Powers of Matter. Having descended to the lowest depths of Chaos, she at length reaches the limit, and the path of her pilgrimage begins to lead upward to Spirit again. Thus she reaches the Balance; and still yearning for the Light, rounds the turning-point of the cycle, and changing the tendency of her thought or mind, recites her penitential hymns or Repentances.
Her chief enemy who, with his false Light, has drawn her down into Chaos, is Ialdabaoth, the Power with the appearance of a Lion, the Kama “principle”, the false “Light`’ in Chaos, which is assisted by the 24 Hylic or Material Projections, or Emanations, the reflections of the 24 Supernal Projections, the co-partners of PISTIS-SOPHIA, 48 in all, which together with that power or aspect from which the whole may at any time be viewed, make 49.*
* Compare the list of 25 Tattvas (24 + 1 or from another aspect 5 x 5) in the article entitled “The Hindu Theory of Vibration as the Producer of Sounds, Forms and Colors,” The Theosophist, Vol. XII, October and November, 1880, written by C. Kotyya, F.T.S.

Thus then she first utters 7 Repentances. At the 4th of these, the turning-point of a sub-cycle, she prays that the Image of Light may not be turned from her, for the time was come when the Repentance of “those who turn in the Lowest Regions” should be regarded, “the mystery which is made the Type of the Race.” (4th Round.) At the 6th the Light (Upper Manas) remits her transgression, in that she quitted her own Region and fell into Chaos; but the command had not yet come from the First Mystery (Buddhi) to free her entirely from Chaos. Therefore at the conclusion of her 7th Repentance, where she pleads that she has done it in ignorance through her love for the Light, Jesus, the Initiate on the objective plane and the Light on the subjective plane, without the command of the First Mystery (i.e., the power of Manas alone without Buddhi), raises her up to a slightly less confined region in Chaos, but SOPHIA still knew not by whom it was done.
At the 9th Repentance the First Mystery partly accepted her prayer and sent Jesus, the Light, to help her secretly, that is, without the powers of the Aeons knowing it; then did PISTIS-SOPHIA recognize the Light. Her next 4 Hymns are sung knowingly to the Light, and are of the nature of thanksgiving, and of declaration that Karmic Justice shall shortly overtake her oppressors, while she prays to be delivered from her “transgression,” viz., the Kamic Power with the appearance of a Lion. After the 13th Repentance, Jesus again, of himself, without the First Mystery, emanated a brilliant Power of Light from himself, and sent it to aid SOPHIA, to rais her higher still in Chaos, until the command should come to free her entirely.†

Email ThisBlogThis!Share to TwitterShare to FacebookShare to Pinterest
Labels: Gnositicism