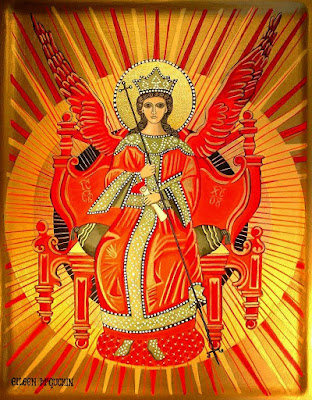 Next follows a description of the Light-powers which should be closely compared with the description of the 3 Vestures in the opening pages of the Codex. Then while SOPHIA pours forth hymns of joy, the Power becomes a Crown to her head, and her Hyle or material propensities begin to be purified, while the spiritual or Light-powers which she has still retained, join themselves with the “Vesture of Light” which has descended upon her. Then was the Statute fulfilled, and the First Mystery, in its turn, sent forth a great Power of Light, which joined with the first Power emanated by the “Light,” and became a great Stream of Light, this Power was the First Mystery itself Looking-without (Buddhi-Manas) on its own plane and the “glorified” Initiate in this terrestrial sphere.

It came forth from the First Mystery Looking-within (Atma-Buddhi) or “the Father.” When this is accomplished, PISTIS-SOPHIA, the Lower Manas, is purified again, and her Light-powers are strengthened and filled with Light, by their own co-partner of Light that Syzygy, without whom PISTIS-SOPHIA in the beginning thought she could reach the Light of Lights, and so fell into error. Still she is not even yet entirely freed from the bonds of Matter, for the higher she rises, the stronger are the Powers of Projections sent against her, who proceed to change their shapes, so that she now has to struggle against still greater foes which are emanated and directed by the strongest and subtlest Powers of Matter. Thereupon, PISTIS-SOPHIA is surrounded entirely with the Stream of Light and further supported on either hand by Michael and Gabriel, the “Sun” and “Moon.” The “Wings” of the “Great Bird” flutter, the “Winged Globe” unfolds its pinions, preparatory to its flight. For is not the Infinitude of Space “the Nest of the Eternal Bird, the flutter of whose wings produces life”? (S.D., II, 293).

Thus the last great battle commences. The First Mystery Looking-without, directs its attack against the “cruel crafty powers, passions incarnate” and causes PISTIS-SOPHIA to tread underfoot the Basilisk with the seven heads, destroying its Hyle, “So that no seed could arise from it henceforth,” and casting down the rest of the opposing host.* Thereupon PISTIS-SOPHIA sings Hymns of Praise on her being loosed from the bonds of Chaos. Thus was she set free and remembered. Yet the Great Self-willed One and Adamas, the Tyrant, were not yet entirely subdued, for the command had not yet come from the First Mystery, Looking-within, the Father.

Therefore does the First Mystery, Looking-without, seal their regions and those of their Rulers until 3 times are completed. That is until the completion of the 7th Round (for we are now in the 4th) when humanity will pass into the interplanetary Nirvana. This Nirvana however, is a state outside of space and time, as we know them, and therefore can be reached now and within, by very holy men; Naljors and Arhats, who can attain to the highest degree of the mystical contemplation, called in the East Samadhi. For then shall the “Gates of the Treasure of the Great Light” be opened, as described in our text, and the Nirvanic heights be crossed by the “Pilgrim.” (cf. pp. 169-181) (CW 60-62)

Though the careful student of this stupendous system may sense the unity of the scheme which underlies such manifold multiplicity, yet it is exceedingly difficult, without being excessively prolix, to point out all the correspondences. To all below it the Treasure of Light is a unity; and its Orders, Projections, etc., in other words its Hierarchies have but one influence. Therefore, when the contents of the Treasure are mentioned at an earlier period of instruction, as on page 18, they are simply stated without order. But now, a further veil is withdrawn, and the Treasure becomes the Inheritance of Light; this will be when the Evolution of Cosmos is completed, and by analogy at the end of a Round, or of seven Rounds, or again in Initiation when the plane of consciousness called the Treasure is reached by the neophyte. Then, just as Jesus in his passage to the Height, (pages 25 to 37) turned six of the Aeons to the Right and six to the Left, so will the Initiated enter into the Treasure and with their higher consciousness perceive its differences; thus will there be a Right and Left even in that which was previously supposed to be beyond such division. (Blavatsky, CW 13, p. 64)

[PS 239] “. . . And when they shall have brought him to the Virgin of Light (1), the Virgin of Light shall see the Sign of the Mystery of the Kingdom of the Ineffable, which is with him . . . . .”
1) The Virgin of Light. In the Chaldean cosmogony, Ana signifies the “invisible heaven”, the Heavenly Mother of the terrestrial sea: or esoterically, Akasa the mother of the Astral Light. Now Anaitis is one of the names of Kali, the female aspect. Sakti or Syzygy of Siva. She is also called the Annapãrna and Kanya, the Virgin. Her mystery name is Uma-Kanya, the “Virgin of Light.” (The Secret Doctrine I,91, 92.) In the Egyptian and other cosmogonies, the first septenary group of emanating potencies is called the “Virgins of Light” and is represented collectively by the six-pointed star; this star “refers to the six Forces or Powers of Nature. the six planes, principles, etc., etc., all synthesized by the seventh, or the central point in the Star.” (The Secret Doctrine, I, 125).


On reference to Table VI in the Commentary, it will be seen that there are seven Virgins of Light, all aspects of the one Virgin. Now there are, as of everything else, seven aspects, planes or principles of virgin matter, corresponding to the seven principles of man, from the pure, divine Akasa, to the terrestrial Astral Light, the sin-laden atmosphere of our earth. These are the septenary leaves of the Book of the Recording Angel, Le Livre de la Conscience, whither are instantly transferred the deeds, words and THOUGHTS of every minute of our lives, the Karmic record of each imprisoned soul. In the early portion of our text, we learned how the Initiate donned the spotless Vesture of Light containing the Five Words of Glory, and how they were potent to open all the portals and traverse all the Regions of the Rulers.
So also with every man. Each has his own vesture, reflecting his Karmic record, and “uttering the words” that will acquit or condemn him before the jealous guardians of nature’s inmost realms. Yes; each of us has a vesture woven by his own hands, but few are they who are clad in a “wedding garment” and fit to join in the Marriage Feast, when the King’s Son is united to his Heavenly Bride; in other words, to join that holy Brotherhood where each, to gain admittance, must be at one with the Christos within him. He who seeks admission in sin-soiled robes must, like the man in the parable (Matt., xxii) be cast forth into the “outer darkness” of earth-life, until he has learnt by the experience of suffering to weave for himself a garment worthy of the “Church (Assembly) of the Mystic Christ.”

Thus, then, the Souls of the Dead have to present, each severally, their Defences., Denials, and Tokens, as the text has it, and the nature of their after-death experiences and their subsequent return to earth-life will depend upon which of the seven Virgins they have to face in the “Hall of Judgment.” Thrice blessed is he who, clad in the Vesture of Glory, can pass by the Guardians of every threshold.


The above will throw much light on the Mysteries of the Osirified and the fate of the “defunct” that play so conspicuous a part in the “Wisdom of the Egyptians.” To give one instance out of a multitude: “In the book called by Champollion La Manifestation à la Lumière, there is a chapter on the Ritual which is full of mysterious dialogues, with addresses to various ‘Powers’ by the soul. Among these dialogues there is one which is more than expressive of the potentiality of the Word. The scene is laid in the ‘Hall of the Two Truths.’ The ‘Door,’ the ‘Hall of Truth,’ and even the various parts of the gate, address the soul which presents itself for admission. They all forbid it entrance unless it tells them their mystery, or mystic names.” (Isis Unveiled, II, 369.) (Blavatsky, CW 13, p. 76)