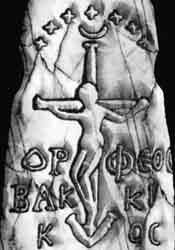 Fables of the Reconstruction
The previous quarter experienced its share of expected turmoil, there was for example the horrible shooting, many forest fires, the Korean Missile crisis, the American consulate in affair, and the revolts in Catalan and . With this chart we can see that the difficult aspects related to the Jupiter-Uranus-Pluto T-Square that marked almost all of 2017 have faded and a new configuration is emerging, giving us a much lower level of friction overall than we have seen in several years (providing us a good two year breather before the Saturn-Pluto conjunction re-shuffles the deck in a big way). As Barry Perlman notes: “Once Jupiter moves into Scorpio on Oct 10, no other slower-moving planet will re-trigger the square between Uranus and Pluto as it continues to separate, allowing its life-altering impact to only further decline until it's just a speck in our rear-view mirrors. This ushers in an early shift in the outer-planet backdrop… one which becomes more pronounced once Saturn departs Sagittarius for Capricorn in late December, then heightens further as Uranus crosses from Aries to Taurus starting in mid-'18, two big astrological developments which swap out a fiery vibe for greater emphasis on the earth element.”

Jupiter in Scorpio Steals the Show
Jupiter moved from Libra to Scorpio on October 10, 2017 (until November 8, 2018) Jupiter and Scorpio are both ambitious and intense; this could give a deep, generous altruism with possible harsh reprisals and a certain freakiness, the most obvious manifestation being the recent and numerous revelations (Jupiter extraversion) of the plague that is sexual harassment (Scorpio perversion). Steven Forrest notes:“That transit boils down to the emergence into the collective consciousness of much that has been taboo or hidden.” Mars is also in Scorpio in a loose conjunction with Jupiter which adds a very dynamic, active, positive, emotional, but also a critical, conflictual, frustrated energy. Jupiter (and Mars) Trine Neptune, a water (emotion) aspect, brings good intuitive, optimistic, idealistic, humanitarian and spiritual energy (with a tendency for over-optimism and risky gambling). According to Perlman: “This Jupiter-Neptune trine is the single most notable outer-planet aspect being formed in this next year… and, considering it's an 'easy' harmonious angle between two boundary-diffusing bodies, this is quite a shift from where we've been…With Jupiter-trine-Neptune's help, we imagine a better world… and we paint it, draw it, write it, sing it, dance it, act it into being. We see the best in another person, despite their glaring flaws, and we lend them our support in rising to it. In doing so, we also risk our avoidant self-serving comfort by calling out the inconvenient and potentially distressing truths which stand in the way—of them becoming their best, and of us becoming ours.”
Jupiter (and Mars) sextile Pluto gives a very dynamic, ambitious, self-confident outlook (with aggressive, domineering tendencies). According to Astology King: “Jupiter sextile Pluto is the major planetary aspect occurring in 2018...Transiting Jupiter sextile Pluto brings success through positive change. You do not have to force change or have to react to unexpected change. This is a natural development in your life associated with increased power and influence, spiritual and personal growth, wealth creation and professional advancement.”
Since Pluto is the dispositer of Scorpio, the Plutonian energy remains quite prevalent. This aspect will go exact in January, April and September in 2018. The Moon in idealistic, unconventional Aquarius is square to Jupiter (and Mars) giving an insecure, irritable, suspicious, moody vibe.

Saturn Entering Capricorn Will Not Be Upstaged


The other major change in the picture is that of Saturn shifting from Sagittarius to Capricorn (just two days prior-lasting until March 21-22, 2020) making it the second planet, along with , to be in its ruling sign. “Saturn in Sagittarius from 2015 to 2017 urged us to take control of our excesses, to question our faith, and to better understand our belief systems”(Café Astrology). Saturn in Capricorn is all about realism, responsibility, hard work, and conventional, conservative values. “For the next three years, there will be a collective focus on the re-definition of morality, integrity, and personal honor” (Steven Forrest) Adding to the synchronicity is the conjunction with the Solsticial Sun (as well as with Venus in adventurous Sagittarius). This spells hard work, perseverance, determination, organizing with some gloom, although Venus adds a happy, warm, generous feel, brightening the stern, serious Saturn-Sun combination. The Sun, Venus and Saturn are also trine Uranus bringing logical, rapid decisions, creativity, caution, strong will and patient working towards change, waning by December 25, another indication of the comprehensive shift in energies occurring at this time.
Combining the two above transits, Forrest remarks: “as Saturn-in-Capricorn enters the picture, its interaction with Jupiter-in-Scorpio promises to be spectacular. Little can remain hidden under this combination of influences. Scorpio always reveals that which has been long-buried, while Capricorn tells us that the karma has now ripened and will manifest materially. The conjoined theme, in other words, will be “the karmic consequences of secrets revealed.” And with Saturn in the mix, the results are likely to be immediate, concrete, and obvious.”
Note that Mercury is retrograde but goes direct the following day, perhaps indicating that one would do well to avoid rushing into the new cycle by reflecting on the previous cycle and planning one’s future projects in an organized manner. Moreover, with Mercury in adventurous Sagittarious, squaring , one`s thinking could be rather fuzzy and confused. But Mercury going direct is another sign of how this Solstice will kick like a poney.
The Passion of Saturn, Sun and Venus 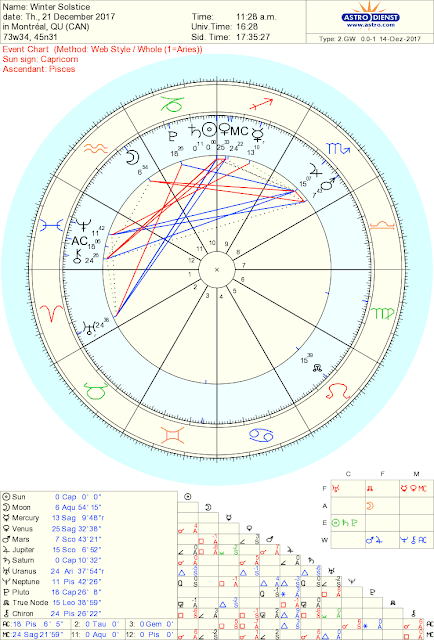 With Chiron situated in Pisces, close to the Spring equinoctial point, thus in strong aspect to the Sun at all the points on the annual cross, the Christ-like connotations of the Healer/Martyr Chiron seem even more pronounced at the Winter Solstice. The image of Christ on the cross exclaiming “My God, why have you forsaken me?” is an image that comes to mind. But now we also have Mars and Jupiter trine Chiron bringing optimal healing energy and confidence. The great kabbalist J. Ralston Skinner interpreted the previous quote as “My God, how you glorify me” the differences possibly indicating a transmutation process, comparable to the difference between being passively dominated by the Super Ego and conscious submission to the Higher Self (sse Blavatsly`s The Crucifixion of Man). Some themes of Chiron square Saturn are: “Avoiding responsibility, agonizing over old hurts, letting resentment brew, self-punishing behavior, over-sensitivity, escapism to avoid pain, martyrdom. “Some themes of Jupiter trine Chiron are: “Recognizing the need to heal, no-nonsense attitudes toward self-care, letting go of the past, taking appropriate responsibility, taking an objective view of one’s challenges, volunteering, mentoring”(Dena DeCastro). Sun square Chiron is more related to fragile ego and identity issues.
We must not forget the omnipresent Uranus-Pluto square (which will fade at the end of 2018). According to Bill Herbst: The Uranus–Pluto alignment is far and away the most important astrological factor for the entire decade of the 2010s— head and shoulders above all the other outer-planet-cycle activations.” He briefly describes it as:” the Uranian impulse toward sudden and revolutionary change is combined with the Plutonian tendency toward radical, ruthless, and extreme use of power.”
Basically the fiery chart of this past year has turned into a more watery, earthy one. This could be a good period to consolidate all the changes and upheavals of that previous phases of dissolution brought and begin to roll up one’s sleeves and work at building new structures and projects for the new directions that have hopefully emerged. Although the inner planets aspects have some cranky, confused energy, the outer planets, with the fading Saturn trine Uranus paving the way for the upbeat Jupiter trine Neptune and Jupiter sextile Pluto aspects set the tone for a more idealistic, ambitious, and positive energy for 2018, with Saturn bringing some serious, realistic, practical, productive energy.
References
Robert Hand, Planets in Transit
H.P. Blavatsky - The Crucifixion of Man
http://www.katinkahesselink.net/blavatsky/articles/v9/y1888_038.htm
http://www.astrobarry.com/2017/sep2617.php
http://www.astrobarry.com/2017/oct1417.php
http://www.astrobarry.com/2017/nov3017.php
https://astrologyking.com/jupiter-sextile-pluto/
http://www.billherbst.com/Comm21.pdf
http://www.denadecastro.com/single-post/2017/01/13/The-Saturn-Chiron-Square-of-2017
https://www.forrestastrology.com/blogs/astrology/saturn-enters-capricorn
https://www.forrestastrology.com/products/jupiter-in-scorpio
https://cafeastrology.com/jupiterinscorpio.html
https://cafeastrology.com/saturn-in-capricorn-2017-2018-2019-2020-saturn-transits.html
Posted by Mark Casady at 17:18