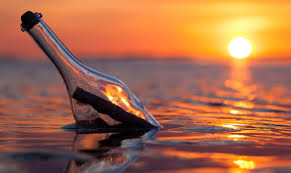 Message in a Bottle
Among other things, Jupiter’s passage in Scorpio brought a sort of sexual revolution, with women becoming very assertive about the prevalent problem of sexual harassment. With fiery Jupiter in Sagittarius, of which it is the ruler, a more confident, outgoing attitude begins to emerge. But we still have to wait until spring for the full momentum, because retrogrades have sent Chiron back into watery Pisces and Uranus back into fiery Aries, a position of revolutionary change, which can be seen with the recent Yellow Vest protests in France, for example.
This Solstice has some interesting indications. A Mercury/Jupiter conjunct is exact and is opposite the Moon, forming a T-Square (with Neptune). A Venus/Neptune trine is also exact, forming a minor grand trine with Saturn. Moreover there is a Venus, Saturn, Moon (apex) Yod, which serves to bind the two previous figures together quite neatly. Moreover, it arrives just a day before a full moon and the following new moon on January 5 brings a partial solar eclipse, which has a strong stellium in Capricorn, followed by a total lunar eclipse on January 21, again with a stellium.
Psycho-Babble
With a Venus (in Scorpio), Moon (in Gemini), Neptune (in Pisces) T-square, there may be communication problems. The desire to reach out and communicate is strong, but the mind tends to be in a very intuitive, abstract, idealistic frame and can have a hard time being understood. Delusive, exaggerated, and overly imaginative tendencies tend to hamper the expression of the intuitive visions that need to be expressed.
This figure contains one of 2019's two most important aspects, a Jupiter/Neptune square. This tends to exacerbate Jupiter’s over-zealous, exaggerating tendencies. According to Astrology King: “Jupiter square Neptune transit brings a test of your faith due to an embarrassing loss of face or some disappointment. You may have been too trusting or over idealized a romantic interest. It is important to cut your losses as soon as the reality of the situation shatters your illusion”. The problem of naïve spiritual delusions could come to the fore: ''The WISE ONES heed not the sweet-tongued voices of illusion" (H.P. Blavatsky, The Voice of the Silence, Fragment 1).
According to Matthew Currie: “Even though the square is considered to be a bad aspect, there is much good that can be gained from it if you work with it properly. Jupiter is the ruler of traditional religiosity and spiritual beliefs, and Neptune has a similar spiritual bent to it — but is a little more focused on the feeling than it is on the rules and regulations involved. When these two forces are in conflict, it is possible that (with wisdom), new insights can be made into the nature of your Universe”.
Intellectual Beauty
Fortunately, the minor grand trine provides an excellent balancing counterpoint. Passionate Venus (in Scorpio) trine Neptune (in Pisces) is harmonized by a solid, grounded Saturn in Capricorn, which brings eloquence and balance to the need for deep, creative connections. A Venus/ Mars (in Pisces) trine adds to a very passionate configuration indeed. This figure contains next year’s other main aspect, a Saturn (in Capricorn)/Neptune trine, which can add balance and discipline to one’s spiritual, creative intuitions. 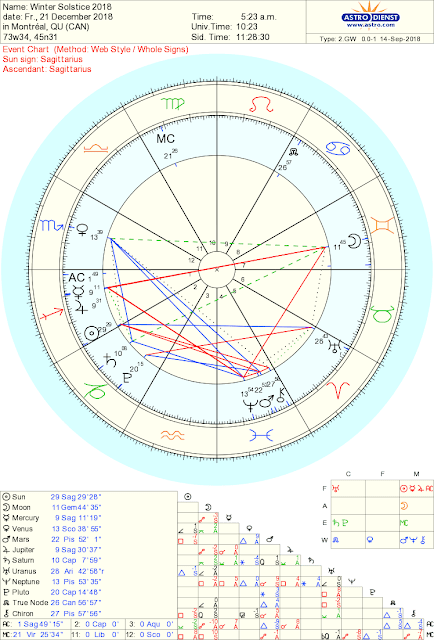 These two complementary figures are nicely encapsulated by a Saturn, Venus, Moon (apex in Gemini) Yod, which indicates difficulties in communicating feeling and visions. This can be resolved by a rational appreciation of traditional feminine values. In Christian Mysticism, a purified communion with the Celestial Virgin is necessary for the powers of the Holy Trinity to manifest.
The Sun is also quite active with a recent exact trine with Uranus (in Aries) which brings a sense of discovery and spontaneity, There is also a Sun/Mars square to watch out for, as it can bring some aggressive, impulsive, argumentative tendencies.

Overall, we have a very interesting chart that sets the tone for most of 2019. Neptune is a central focus, as it relates to the strongly situated planets of Jupiter and Saturn, two fundamentally opposite planets, but also complementary. The dynamic fire/stable earth combination of these two planets situated in adjacent signs can make for a productive synergy. According to Dana Gerhardt: “An optimistic Jupiter can loosen the grip of an inadequate or fearful Saturn, just as a responsible Saturn can realize the here-today-gone-tomorrow enthusiasms of a restless Jupiter. Jupiter dangles the carrot while Saturn wields the stick. Jupiter points us to the future and Saturn grounds us with the past. The philosopher in Jupiter ponders life's meanings, the monk contemplates god's truths, the explorer braves new territories, while the builder, executive and statesman in Saturn ensure that we have universities, churches and roads for our journeys. Jupiter is the eternal child, Saturn the wise elder. Together this fool and fuddy duddy bring the antagonistic and complementary pulls of expansion and contraction, faith and skepticism, luck and diligence, adventure and practicality-or as Caroline Casey calls them, "Haagen-Dazs" and "brown rice."
In the Spring, when Chiron moves back into Aries, and Uranus back into Taurus, the new celestial configuration should consolidate into quite a productive, active, progressive mode. Before then, we have a final opportunity to address the past social injustices, inequities and corruption, as well as past personal impediments, as we struggle to give voice and form to our visions of a better world and projects for idealistic reforms. It is a good time to work on harmonizing one’s inner life with the outer world, or orienting one's actions in reference to essential values.
Astrology King
https://astrologyking.com/jupiter-square-neptune/
Matthew Currie
https://www.beliefnet.com/columnists/ohmystars/2018/12/astrology-2019-part-one-jupiter-square-neptune.html#PSeE2YMG2vJeyIA2.99
Dana Gerhardt
http://www.astro.com/astrology/in_dg_sat_jup_e.htm
Posted by Mark Casady at 08:40