The Ecology of Karma and Reincarnation 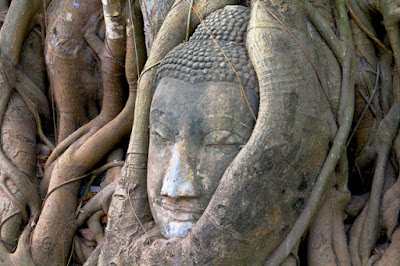 In 1889, with his Universal Applications of Doctrine, Judge delivered another major piece on Karma and Reincarnation and cemented his commitment to a philosophical exploration of these major theosophical topics.

Let us look at Karma. It must be applied not only to the man but also to the Cosmos, to the globe upon which he lives. You know that, for the want of an English word, the period of one great day of evolution is called a Manwantara, or the reign of one Manu. These eternally succeed each other. In other words, each one of us is a unit, or a cell, if you please, in the great body or being of Manu, and just as we see ourselves making Karma and reincarnating for the purpose of carrying off Karma, so the great being Manu dies at the end of a Manwantara, and after the period of rest reincarnates once more, the sum total of all that we have made him — or it. And when I say "we", I mean all the beings on whatever plane or planet who are included in that Manwantara. Therefore this Manwantara is just exactly what the last Manwantara made it, and so the next Manwantara after this — millions of years off — will be the sum or result of this one, plus all that have preceded it.

How much have you thought upon the effect of Karma upon the animals, the plants, the minerals, the elemental beings? Have you been so selfish as to suppose that they are not affected by you? Is it true that man himself has no responsibility upon him for the vast numbers of ferocious and noxious animals, for the deadly serpents and scorpions, the devastating lions and tigers, that make a howling wilderness of some corners of the earth and terrorize the people of India and elsewhere? It cannot be true. But as the Apostle of the Christians said, it is true that the whole of creation waits upon man and groans that he keeps back the enlightenment of all. What happens when, with intention, you crush out the life of a common croton bug? Well, it is destroyed and you forget it. But you brought it to an untimely end, short though its life would have been. Imagine this being done at hundreds of thousands of places in the State. Each of these little creatures had life and energy; each some degree of intelligence. The sum total of the effects of all these deaths of small things must be appreciable. If not, then our doctrines are wrong and there is no wrong in putting out the life of a human being.

Let us go a little higher, to the bird kingdom and that of four-footed beasts. Everyday in the shooting season in England vast quantities of birds are killed for sport, and in other places such intelligent and inoffensive animals as deer. These have a higher intelligence than insects, a wider scope of feeling. Is there no effect under Karma for all these deaths? And what is the difference between wantonly killing a deer and murdering an idiot? Very little to my mind. Why is it, then, that even delicate ladies will enjoy the recital of a bird or deer hunt? It is their Karma that they are the descendants of long generations of Europeans who some centuries ago, with the aid of the church, decided that animals had no souls and therefore could be wantonly slaughtered. The same Karma permits the grandson of the Queen of England who calls herself the defender of the faith — of Jesus — to have great preparations made for his forth-coming visit to India to the end that he shall enjoy several weeks of tiger-hunting, pig-sticking, and the destruction of any and every bird that may fly in his way.

We therefore find ourselves ground down by the Karma of our national stem, so that we are really almost unable to tell what thoughts are the counterfeit presentments of the thoughts of our forefathers, and what self-born in our own minds.

Let us now look at Reincarnation, Devachan, and Karma. It has been the custom of theosophists to think upon these subjects in respect only to the whole man — that is to say, respecting the ego.

But what of its hourly and daily application? If we believe in the doctrine of the One Life, then every cell in these material bodies must be governed by the same laws. Each cell must be a life and have its karma, devachan, and reincarnation. Every one of these cells upon incarnating among the others in our frame must be affected by the character of those it meets; and we make that character. Every thought upon reaching its period dies. It is soon reborn, and coming back from its devachan it finds either bad or good companions provided for it. Therefore every hour of life is fraught with danger or with help. How can it be possible that a few hours a week devoted to theosophic thought and action can counteract — even in the gross material cells — the effect of nearly a whole week spent in indifference, frivolity, or selfishness? This mass of poor or bad thought will form a resistless tide that shall sweep away all your good resolves at the first opportunity.

This will explain why devoted students often fail. They have waited for a particular hour or day to try their strength, and when the hour came they had none. If it was anger they had resolved to conquer, instead of trying to conquer it at an offered opportunity they ran away from the chance so as to escape the trial; or they did not meet the hourly small trials that would, if successfully passed, have given them a great reserve of strength, so that no time of greater trial would have been able to overcome them.

Now as to the theory of the evolution of the macrocosm in its application to the microcosm, man.

The hermetic philosophy held that man is a copy of the greater universe; that he is a little universe in himself, governed by the same laws as the great one, and in the small proportions of a human being showing all those greater laws in operation, only reduced in time or sweep. This is the rule to which H. P. Blavatsky adheres, and which is found running through all the ancient mysteries and initiations.

It is said that our universe is a collection of atoms or molecules — called also "lives"; living together and through each the spirit struggles to reach consciousness, and that this struggle is governed by a law compelling it to go on in or between periods. In any period of such struggle some of these atoms or collections of molecules are left over, as it were, to renew the battle in the next period, and hence the state of the universe at any time of manifestation — or the state of each newly-manifested universe — must be the result of what was done in the preceding period.

Coming down to the man, we find that he is a collection of molecules or lives or cells, each striving with the other, and all affected for either good or bad results by the spiritual aspirations or want of them in the man who is the guide or god, so to say, of his little universe. When he is born, the molecules or cells or lives that are to compose his physical and astral forms are from that moment under his reign, and during the period of his smaller life they pass through a small manvantara just as the lives in the universe do, and when he dies he leaves them all impressed with the force and color of his thoughts and aspirations, ready to be used in composing the houses of other egos.

Now here is a great responsibility revealed to us of a double character. The first is for effects produced on and left in what we call matter in the molecules, when they come to be used by other egos, for they must act upon the latter for benefit or the reverse. The second is for the effect on the molecules themselves in this, that there are lives or entities in all — or rather they are all lives — who are either aided or retarded in their evolution by reason of the proper or improper use man made of this matter that was placed in his charge.

Without stopping to argue about what matter is, it will be sufficient to state that it is held to be co-eternal with what is called "spirit." That is, as it is put in the Bhagavad-Gita: "He who is spirit is also matter." Or, in other words, spirit is the opposite pole to matter of the Absolute. But of course this matter we speak of is not what we see about us, for the latter is only in fact phenomena of matter: even science holds that we do not really see matter.

Now during a manvantara or period of manifestation, the egos incarnating must use over and over again in any world upon which they are incarnating the matter that belongs to it. So, therefore, we are now using in our incarnations matter that has been used by ourselves and other egos over and over again, and are affected by the various tendencies impressed in it. And, similarly, we are leaving behind us for future races that which will help or embarrass them in their future lives.

This is a highly important matter, whether reincarnation be a true doctrine or not. For if each new nation is only a mass of new egos or souls, it must be much affected by the matter-environment left behind by nations and races that have disappeared forever. But for us who believe in reincarnation it has additional force, showing us one strong reason why universal brotherhood should be believed in and practised.

The other branch of the responsibility is just as serious. The doctrine that removes death from the universe and declares that all is composed of innumerable lives, constantly changing places with each other, contains in it of necessity the theory that man himself is full of these lives and that all are traveling up the long road of evolution. The secret doctrine holds that we are full of kingdoms of entities who depend upon us, so to say, for salvation. How enormous, then, is this responsibility, that we not only are to be judged for what we do with ourselves as a whole, but also for what we do for those unseen beings who are dependent upon us for light.