Book Review: Masters of Wisdom: The Mahatmas, Their Letters, and the Path - Edward Abdill 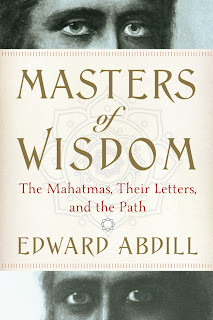 And so a new book on the Mahatma letters has been released by mainstream publisher Penguin Books. Who are these mysterious mahatmas, adepts, brothers, so closely connected with Blavatsky and the Theosophical Society and who have been the source of so much questioning, curiosity and doubt? The mystery was considerably lessened (and at the same time increased) by the actual publication, in the early twenties, of their many letters to various individuals, namely the thick Mahatma Letters to A.P. Sinnett, and the Letters of the Masters of the Wisdom, vols. 1 & 2. And one could say that these publications, especially the first one, represent the last big mainstream impact of the theosophical movement, causing quite a stir at the time and going through something like ten editions in ten years.
Although   the letters are at times quite personal with lots of discussions about practical business, nonetheless they are also often quite eloquent, framed in the time-honored literary tradition of letters of spiritual advice. Moreover, prior to their publication, these letters were apparently widely copied and circulated and influenced a lot of the early writings, notably Sinnett’seminal Esoteric Buddhism, which remains one of the clearer expositions of the distinctive notions of cosmology and spiritual evolution.
Indeed the original letters to Sinnett have been scanned by the British Museum and have taken quite a new life on the internet:
http://www.theosophy.wiki/mywiki/index.php?title=ML_Portal
The book gives a broad, succinct overview of many aspects covered in the various letters, in 21 compact chapters:
1-Blavatsky and the mahatmas; 2-Mahatmas: What Are They? Who Are They?;3-Early Letters; 4-God, Evil, and Occult Philosophy;5- Karma; 6-Our Sevenfold Nature; 7-From Death to Rebirth;8- Science; 9-Working to Mold the Future; 10-Founding of the Theosophical Society; 11-Alleged Encounters with Masters; 12-Forgery and Plagiarism; 13-There is a Road; 14-The Search for Meaning; 15-The Golden Stairs;16-Pitfalls on the Path; 17- Selfishness, Pride, and Egoism; 18-Desire and Attachment; 19-Study, Meditation, and Service; 20-Lay Chelas and Chelas; 21-Working as Colleagues with the Masters
The original letters on cosmology, reincarnation and karma can actually be pretty difficult and Abdill does a good job of simplifying and systematizing the concepts, borrowing liberally from Blavatsky’s writings to clarify certain obscurities. He also does a good job at showing the human practical side of this mysterious esoteric brotherhood, in the sense that they can be seen to express themselves quite frankly and lucidly when it comes to Blavatsky’s often enigmatic character, not without a certain sense of humour. But even this critical aspect has useful pedagogical value if one considers that, in the case of many American and European recipients, they were merely very minutely and patiently addressing the problems and pitfalls of a materialist, individualistic western society steeped in the colonialist mentality of the time that, to a certain extent, continue to mark modern western society.
The author shows a good  familiarity with the material and gives an accessible, contemporary interpretation noticeably based in the Besant/Leadbeater/clairvoyance/chakra/Christian approach and so one encounters the occasional quirky concept not easily traceable to Blavatsky or her teachers, in a certain sense showing that a more straightforward anthology with less commentary and more historical/ technical annotations could also be a viable approach.
Nonetheless, I think that overall, the book shows that it is possible to build a coherent contemporary presentation of all the basic theosophical tenets firmly grounded in this enigmatic collection of letters and so makes for a solid introduction for those who wish to explore the original writings; a welcome return of the Mahatma letters to mainstream publishing.


PS. The author issued this correction on his facebook page:
"Retraction: On page 120 of Masters of Wisdom I quoted Olcott's claim that Judge told Mrs. Besant that if she went to Adyar he (Olcott) might poison her. Subsequently I have learned that Olcott may have been mistaken. Olcott’s memory may have become faulty or he may have taken a metaphorical statement literally. Whatever the case, I hope we can all focus on the very real contributions Judge and Olcott made to the Theosophical cause and let the events of 1894-95 die. As is almost always the case in disputes, there are two sides and perhaps a third which is the truth. I regret having included the quote and should there be further editions of the book I shall remove it."